Well I made it the 880 km to Tai'an in one day because no one bothered to boot me off the expressway. Then, when I got up next the morning, I could actually see Taishan out my hotel window. Well, almost, it was actually too cloudy and raining to see it very well but here's a photo from my hotel window taken on my last day there. Its the mountain in the background right in the middle of the picture: 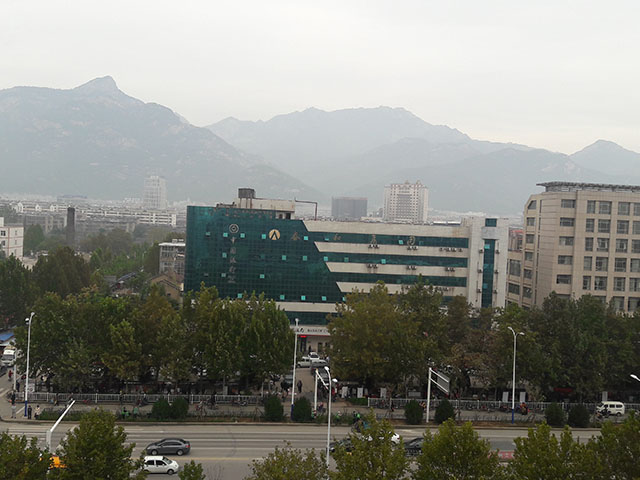 Now this mountain is in some ways the most special of the 5 Greats. It is the head of Pangu, it is the Eastern mountain, and it is the mountain that all the emperors of China would visit to make sacrifices to help establish in their status as emperor of China. Some Emperors would make the pilgrimage to all 5 of the great mountains but they would all at least make it to Taishan.

There were a number of approaches to this mountain, from 3 different sides. I chose to take the same approach that the emperors would have taken. That means starting from the Dai Temple and going straight up from there. This was also convenient for me as the temple was within walking distance of my hotel (3 KM). From the outside it looks more like a fortress than a temple but I guess that makes sense if it is where the emperor stayed when in town: 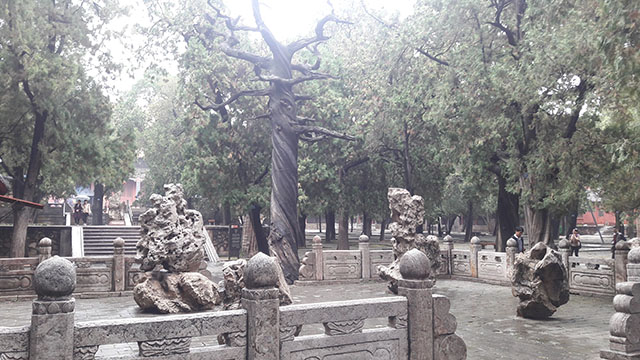 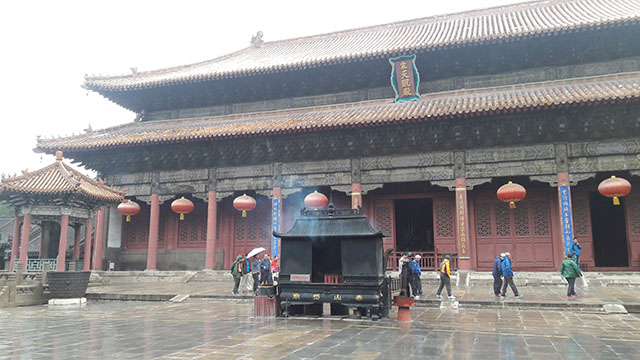 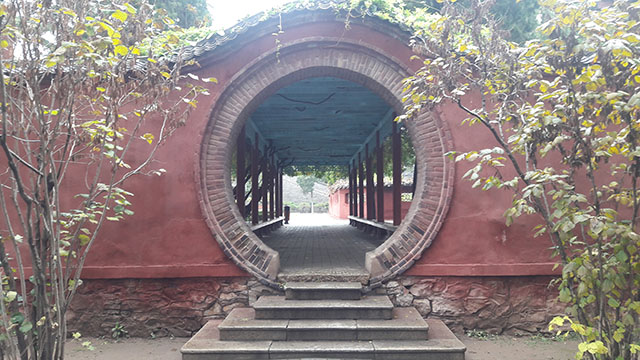 And it leads to another hobbit door that has a bonsai garden inside: 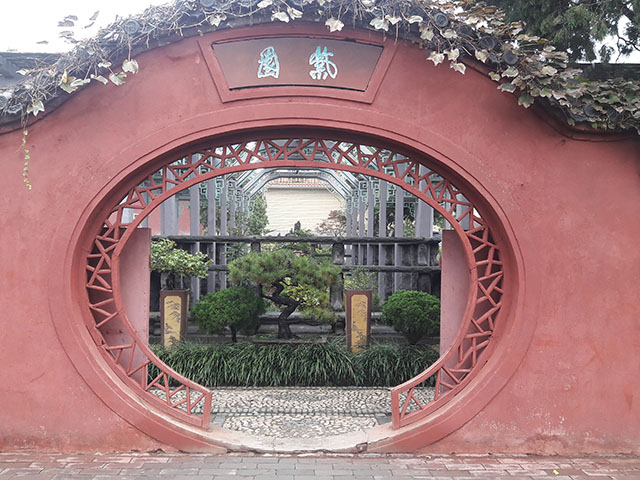 There are many more bonsai gardens, some of the more delicate varieties are in greenhouses like this. In behind the greenhouse you can see one of the 4 corner towers of this complex. 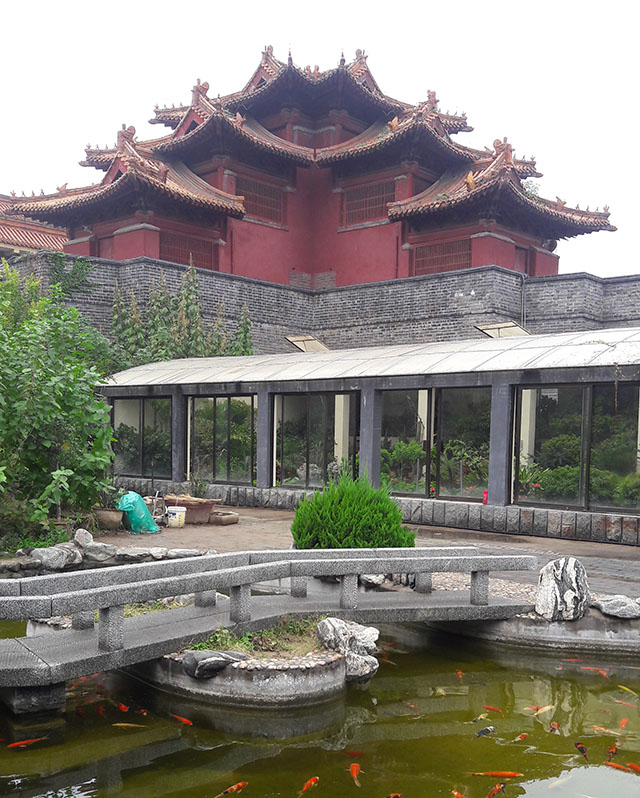 And then, out the front door is the modern street which lies where the ancient road used to be, the road that the emperors would take to the mountain (which is just to the left of center - behind the tree). 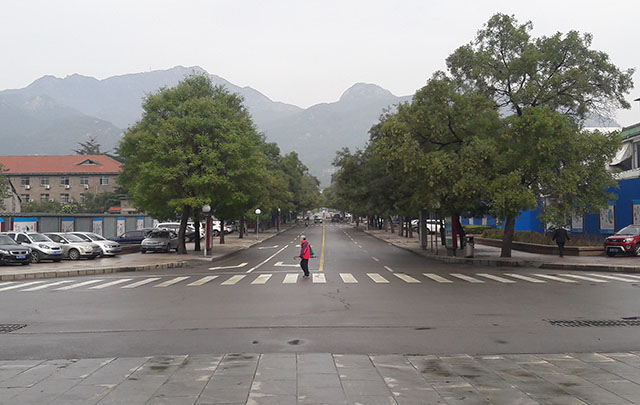 This is named "Red Gate Road" because it leads to the Red Gate which is the entrance to the mountain. After about 1-1/2 kilometers we start seeing red buildings but its not yet a gate. And the stone steps are starting already here and also there is a sign saying something like "ascent starts here" 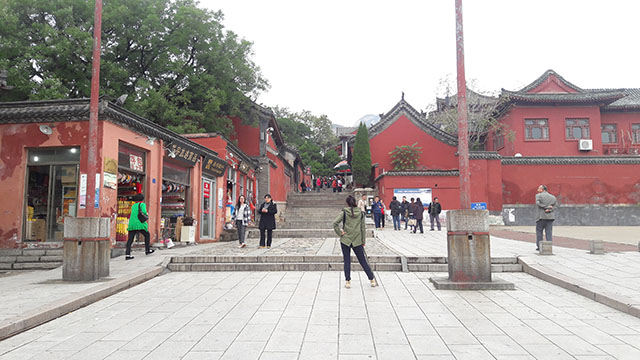 And along the way are many shops selling essential tourists supplies, like sticks - walking sticks, incense sticks and selfie sticks. 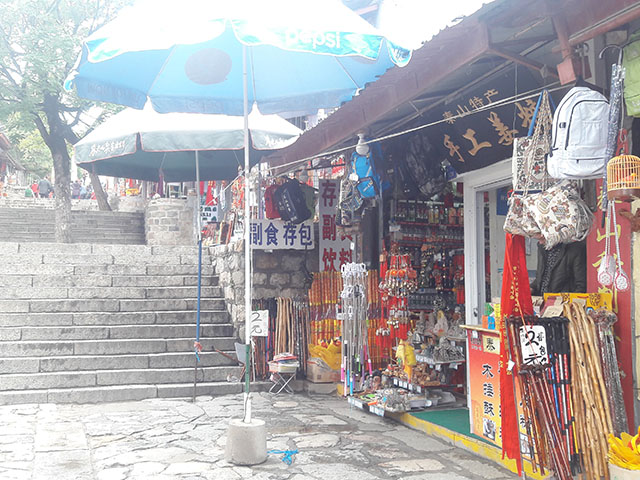 Finally I reach the Red Gate; 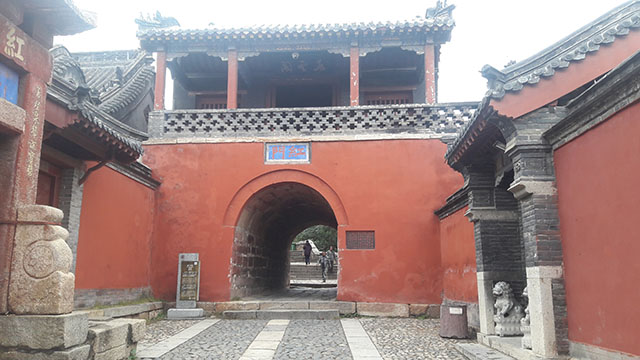 Then are are a fewer tourist shops and more steps. The steps start out relatively gentle: 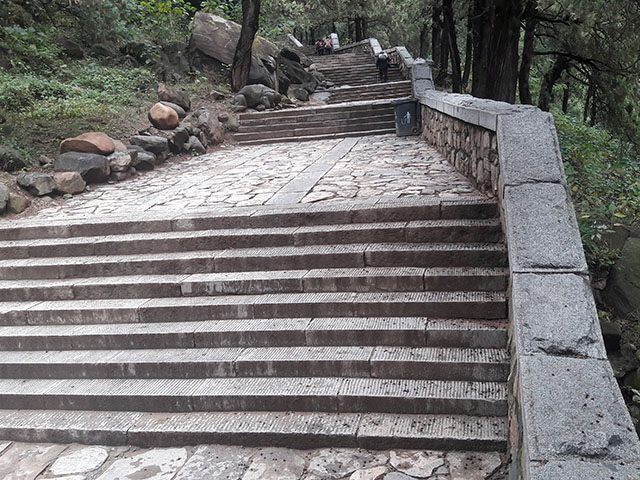 The staircase looks wide enough for thousands of people to pass in both directions. Even so, a family group of 5 can easily spread out along the width of this path completely blocking traffic in both directions - while seeming to be completely oblivious to the fact that that they are inconveniencing other people. Fortunately this was a rainy weekday at the end of October - so no crowds.

Of course there are many more gates along the way. There is a gate for everything in China. And sometimes it seems like, in the middle of nowhere there is a gate for no other reason than someone thought it must be a good place to put another gate. Anyway, this is something I've never seen before - trees growing right out of the wall of the gate: 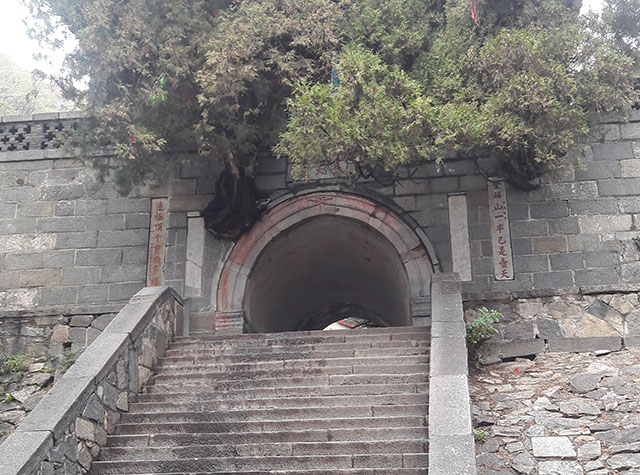 After much walking and climbing of stairs I got to a patio which marks the half way point in vertical rise. The whole mountain is a rise in elevation of about 1300 meters and this is at about the 650 meters up. 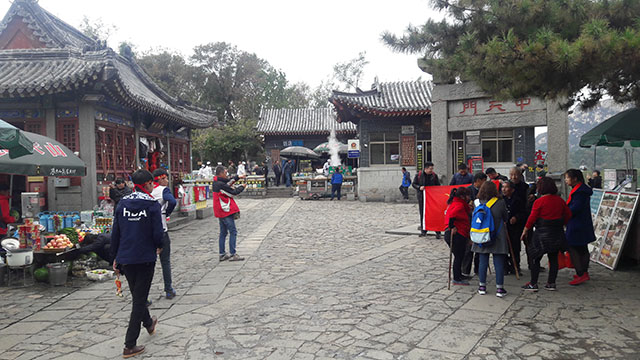 It  maybe 1/2 way but it still looks like a long way to the top: 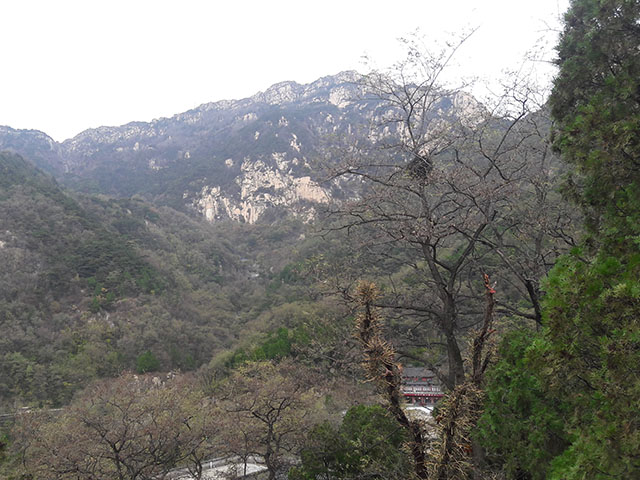 This 1/2 way point is also a transfer point for people getting assisted travel to the top. Buses bring people up this far and then to get to the cable car they have walk along this corridor where, in case they missed it before, they can buy all sorts of tourist sticks. 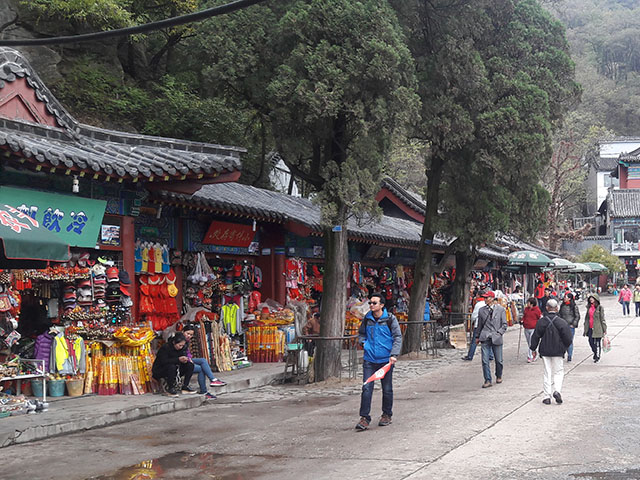 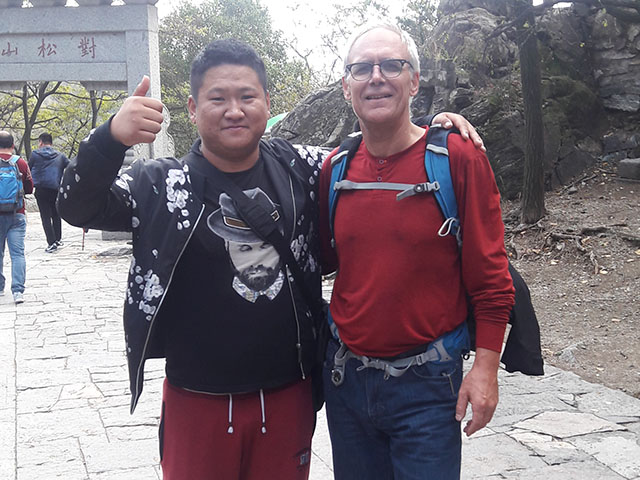 At this point the stairways are pretty steep and there is still no end in site. This was also one of the times when Carole happened to send me a text from Canada so I took a few moments to "chat" with her before proceeding on.  Our contact was sporadic while I was on this trip so we both tried to respond when attempts were made. 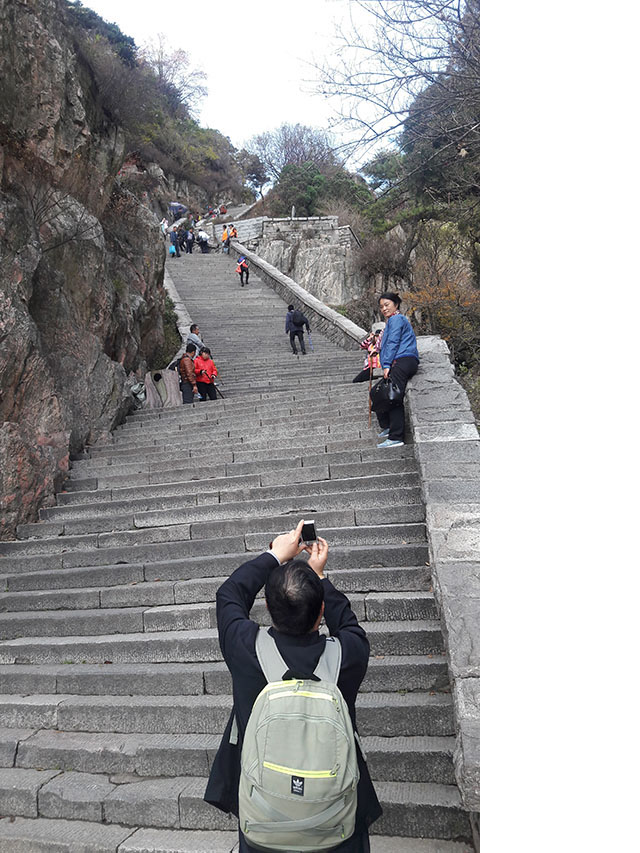 Beside the main stairway we can see the remains of an older set of steps. The Chinese have been building steps up their sacred mountains for centuries: 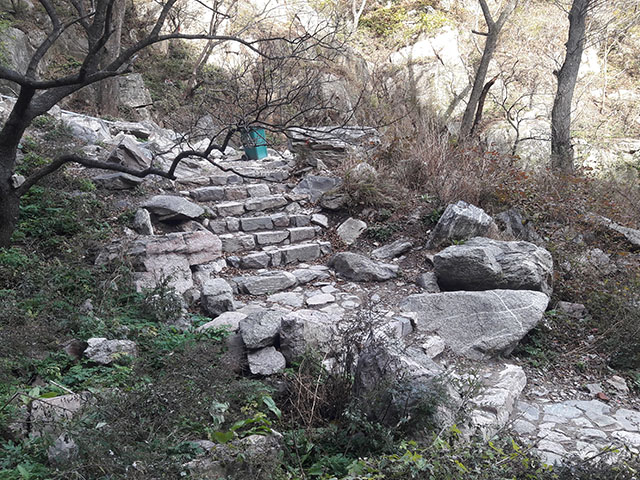 And finally getting close to the end. There are more people here because the cable car ends just below this staircase so everyone wanting to get to the summit must pass this way: 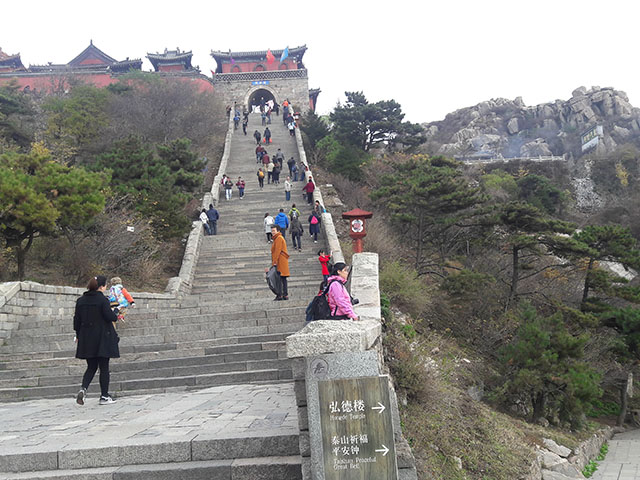 The view from here (at least there is a view as the summit was completely socked in with fog): 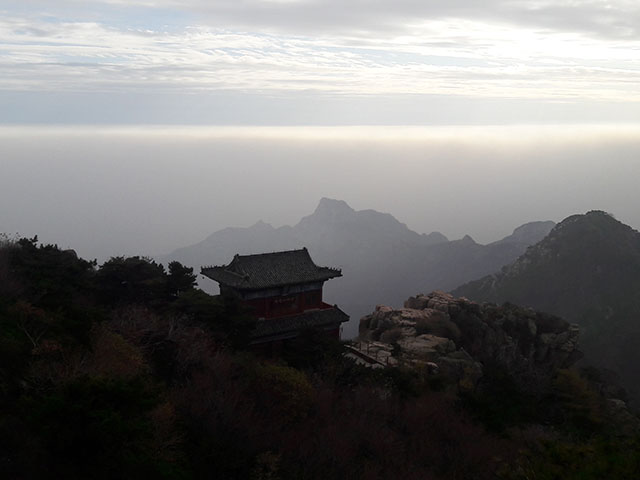 And here is the temple at the very top. In the center is a sort of wishing well covered in padlocks. I'm guessing that if you buy one of their blessed padlocks, make a wish and lock it to the fence around the well, then surely your wish will come true. 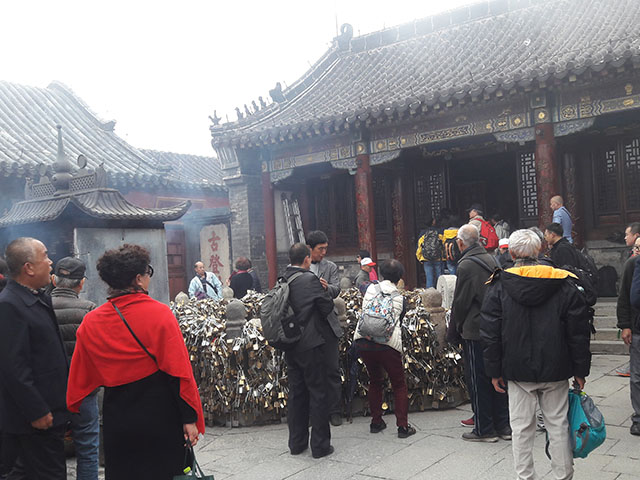 This climb seemed to me to be harder than the other climbs, I was exhausted. I think it was probably about 200 meters more vertical rise than any of the other climbs I did this past month. I was happy to take the cable car and bus back down onto town - and then even a taxi back to my hotel.

This was the last mountain  of my tour but I was not yet home. There were still 600 KM to go and the weather forecast said rain all the way home. Now I can handle getting wet, but also I was now back in Northern China and the expected low at my destination was 0 degrees. I wasn't ready to be wet AND COLD for an 8 hour ride. The forecast also said that the following day would be cold but dry the whole distance - so I stayed another day. I didn't do much that day other than catch up on writing this blog. Anyway, a day later, I made it safely home, cold but dry.  Carole arrived back from Canada two days later.
Posted by Unknown at 5:57 PM