I arrived in China April 18 2015. I soon began writing blog type emails to my family. So now I have decided to set up an actual blog. I will start by copying the three first letters to this blog. This is the first and it was originally sent on April 22, 2015:

As most of you already know, Carole and I have gone to work in China for a year. For you here is a short view in pictures of our trip so far.

To start we let go of our rental house and packed everything into a big storage locker. we seem to have way too much stuff: 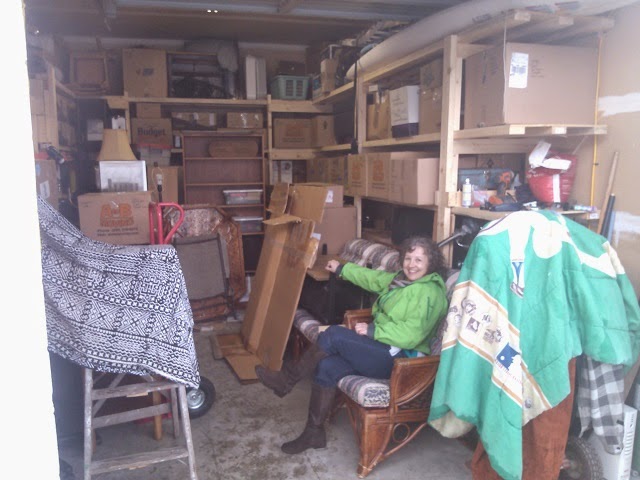 Then we got on the plane. We were lucky as the plane is a new design Boeing 787 (Dreamliner) which is a new design, built with modern lightweight materials which makes it faster and more efficient allowing enough extra energy to supply the interior with better air than the airplanes we are used to. As a result we do not feel so fatigued after the long flight. This plane has curved wings which look something like a bird in flight. Also the windows don't have blinds that come down, instead they have some kind of electronic shading of the windows so you can always look out even when shaded. Here is the curved wing seen through a shaded window: 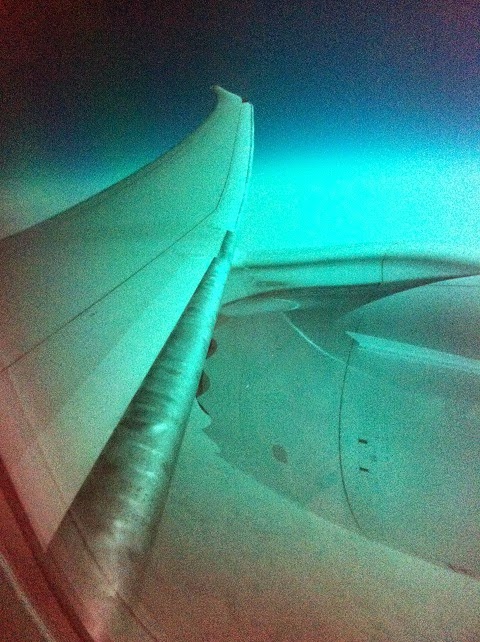 We arrived at Beijing airport and our company representative was there to drive us straight to where we will be living. It is 100 KM North West of Beijing. on the way we passed right through the Great Wall and could see sections of it along the roadside. Where we live is a development called "Jackson Hole". You can google for more information but this is a luxury development where wealthy Chinese own vacation homes and it is all based on a North American "Wild West" theme. Here is the downtown commercial center called "Western Town": 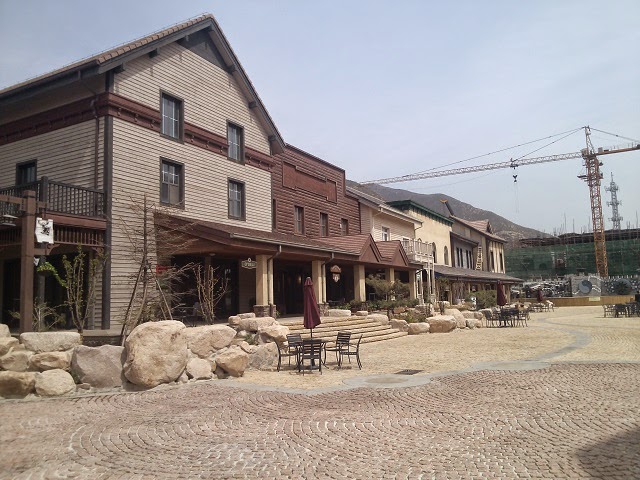 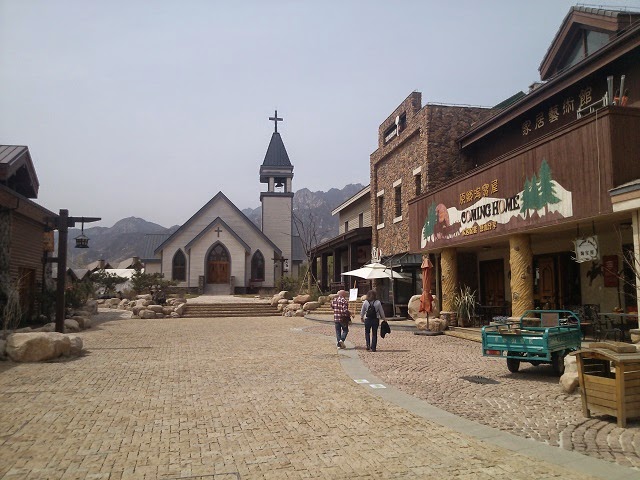 And here is Carole posing with a cowgirl statue: 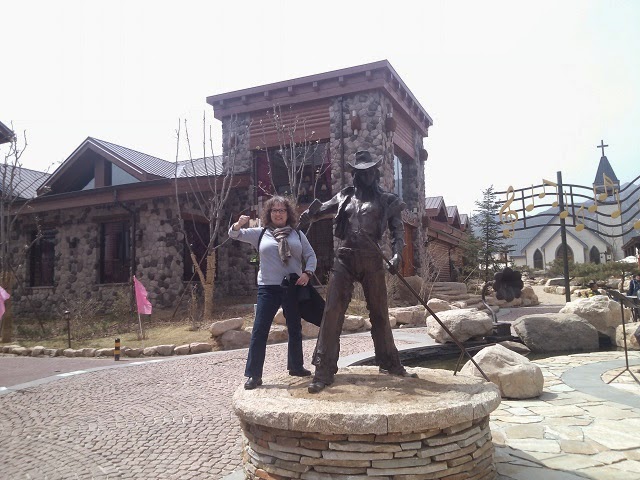 We have 2 days off here to relax and settle in before we start work. We are still in jet-lag so waking up early. Here is sunrise from our living room window: 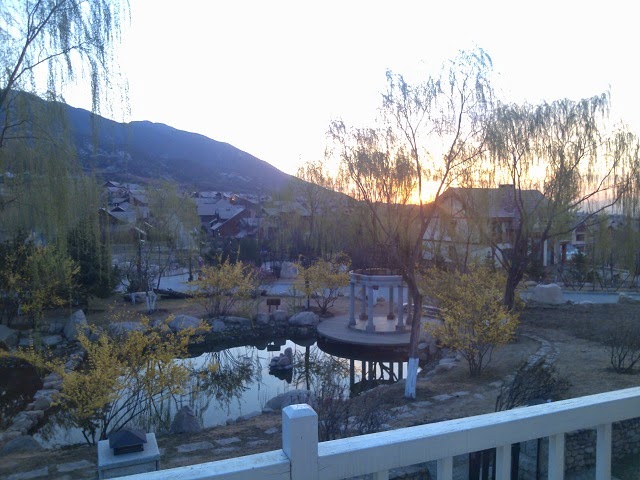 Yesterday we went to the Guya Ju caves which are a 10 minute walk from Jackson Hole. People lived in these caves thousands of years ago. There is lots of speculation but no one knows for sure exactly when or why they built a cave village: 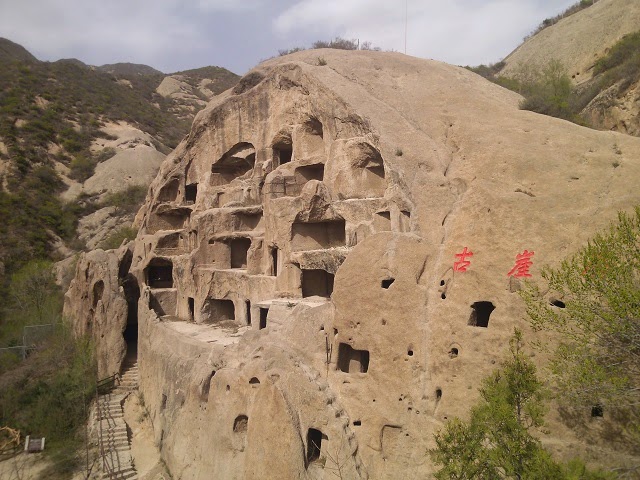 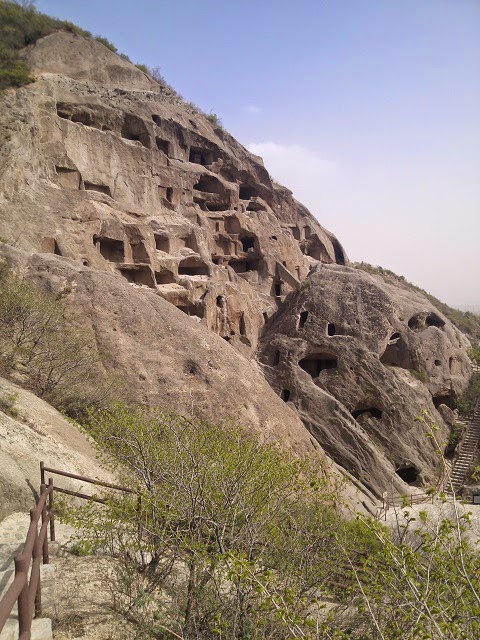 And from the top of the caves we can see Jackson hole and the beyond is the Beijing smog: 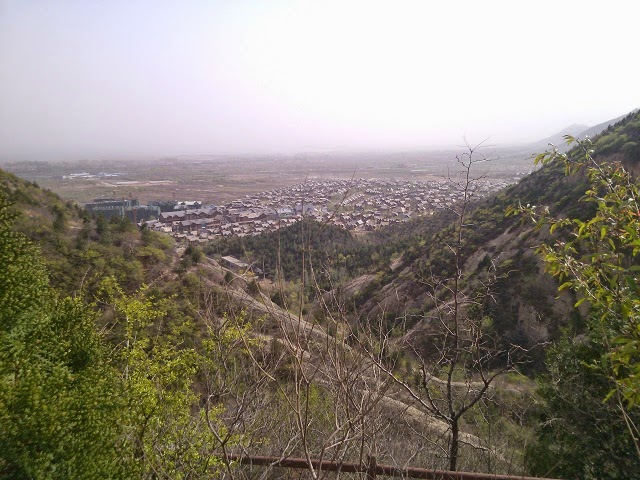 And today we start work, so its time to get ready. I think this first little while will be quite busy for us so I don't know when we'll send the next news.