Its been so long since I posted anything here that I've got a lot to catch up on. And since we are planning a trip to Inner Mongolia on Sunday, well I better post some of the last month on here.

We had a staff retreat in the grasslands bordering Hebei province and Inner Mongolia (sort of straight north of here about 5 or 6 hours drive). Well this area used to be really popular with Beijing residents 10 years ago - until it got "ruined" by over tourism. Nonetheless we had fun. We ate a lot, and drove a lot. And we saw a lot of grass: 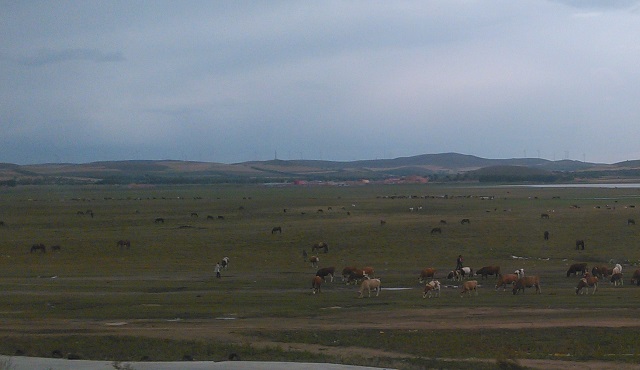 We stopped at an amusement park to ride horses and play bumper cars.  Carole was driving and I was filming:

Oh, and did I say we ate a lot? Particularly we ate a lot of barbequed sheep. 6 sheep in three different sittings: 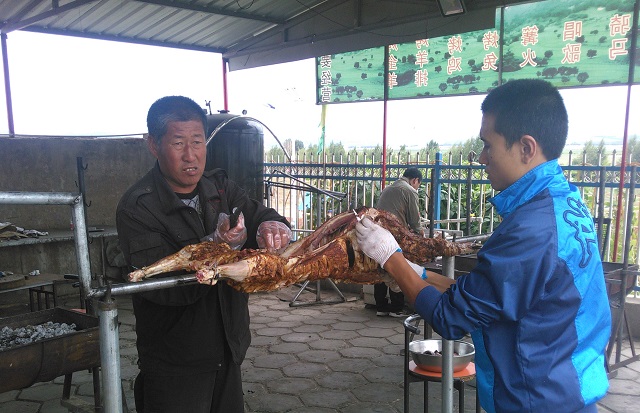 Now that's out of the way, I'll get on to the topic of this post - Home improvements. None of the closets in our house have shelves above the clothes rods. Since I don't have any tools here and supposedly labour is cheap we got a quote from a local carpenter to build 2 shelves. The quote was 4,000 RMB per shelf (that's Can $800 per shelf). So, on our day off a couple of weeks ago we decided to go into town to get some tools and supplies to do it ourselves.

We caught the 8:00 bus which leaves from the property management building. You can see here in the parking lot behind the bus all the employees in formation getting their morning motivational pep talk. I don't know if they do this every day, but so far both times I've taken this morning bus they have done it. 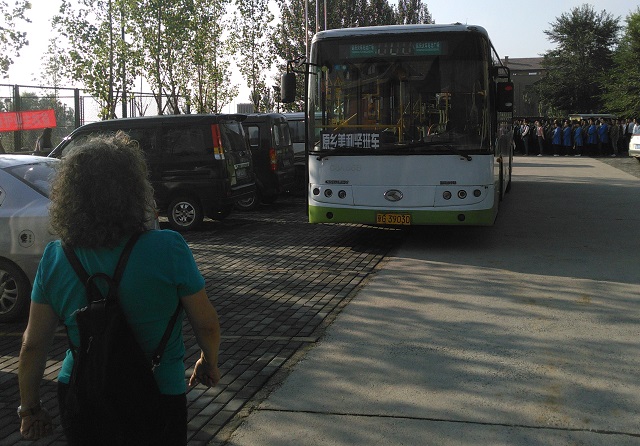 Now in Yanqing town (a city of about 100,000 people) there is nothing like Home depot or even any one hardware store where you can find everything you need. Instead there is a hardware district that is something like 12 city blocks in total area with row after row of different types of small hardware stores. After a lot of walking around (and successfully finding a couple of plumbing parts for another job) we found the area that sells plywood - and hopefully shelving supplies. As we walked past one store I say a partial sheet of plywood so I figured perhaps he can custom cut for us. Here's the store in the middle of a street full of similar stores: 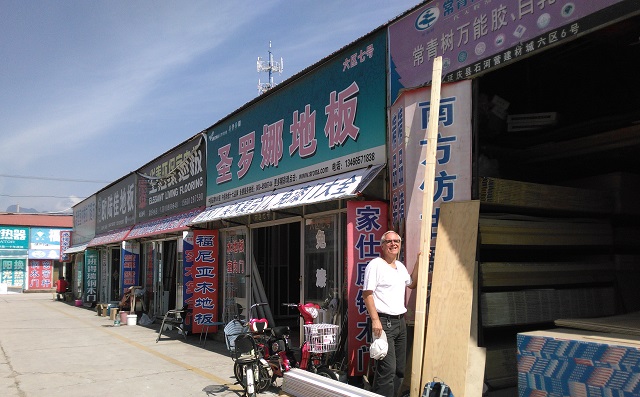 I checked and the shopkeeper indicated he could custom cut and we got the price worked out to cut down a bit more of the partial piece that I had spotted. Still in sign language I attempted to tell him that we would walk around and try to by a drill, hammer, and square (I had pictures to show him that I printed out before going to town). I'm not sure what exactly he understood, but he took my printouts, got on his scooter and came back 10 minutes later with everything on my picture list: 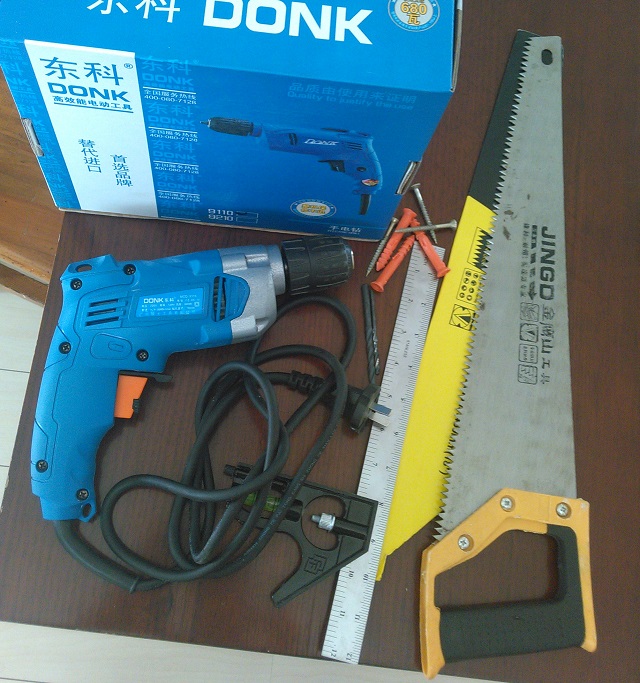 Well almost everything, I had more pictures of shelf brackets and screws and then I hand drew a picture of a drill bit. In the end he went back out on his scooter another 3 or 4 times before we had everything we needed. But that was great because we didn't know what stores to go to. He  became totally involved in our little project and really helped us out a lot. Here he is trying to explain to the taxi driver where we were: 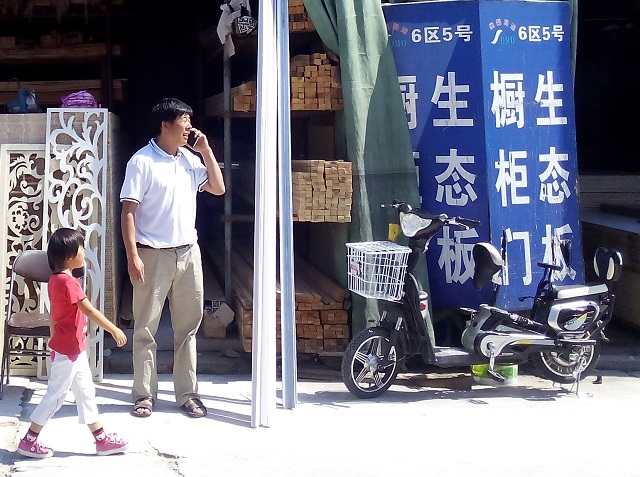 Meanwhile his little girl (walking in front of this photo) was pulling out all her toys and dolls and showing them to Carole. 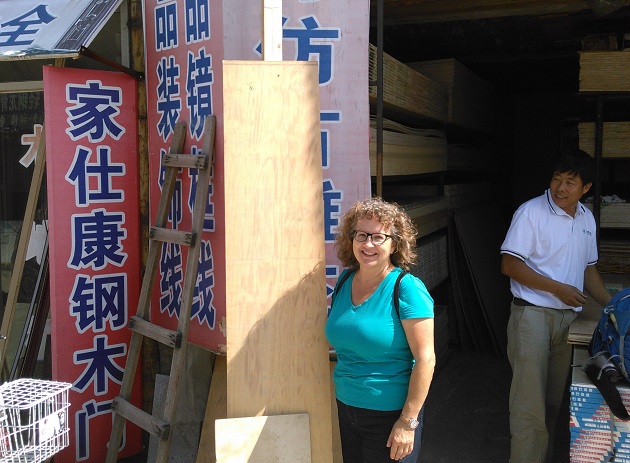 The taxi driver got us as far as the gate to our development and there we were stopped by the guard. He saw the bundle of 4 meter long lathe we had sticking out the front window and stopped us because no one is allowed to bring building materials into the property without a building permit. So we had to leave our stuff laying out in the grass beside the parking lot until after lunch break when someone could talk to the management company about getting a permit. In the end we did not get a permit, the property manager looked at the little bundle of sticks and told the guard to let us through.

So, the closets. Here's our entrance closet without a shelf: 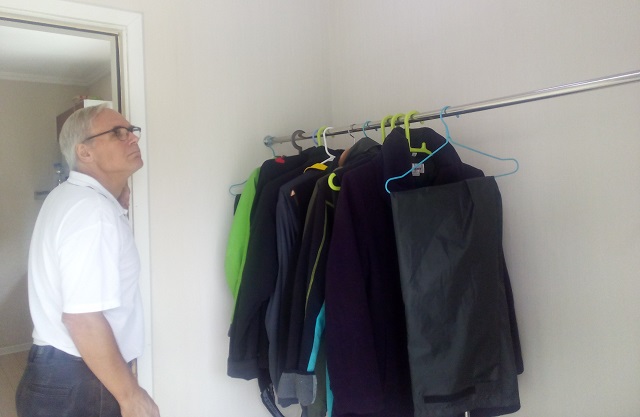 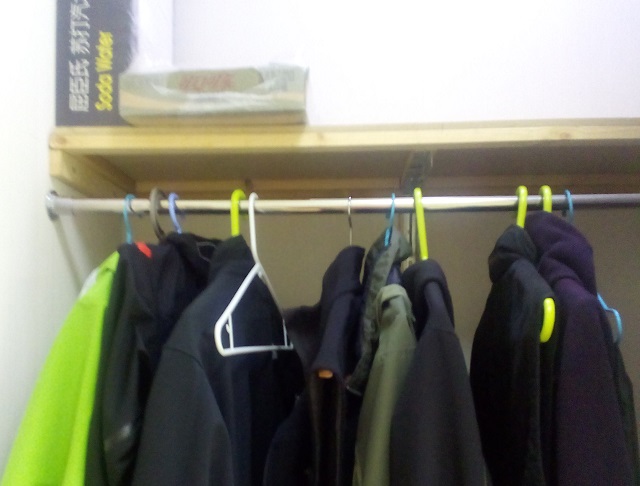 I don't have a before picture of our bedroom, but here is the after: 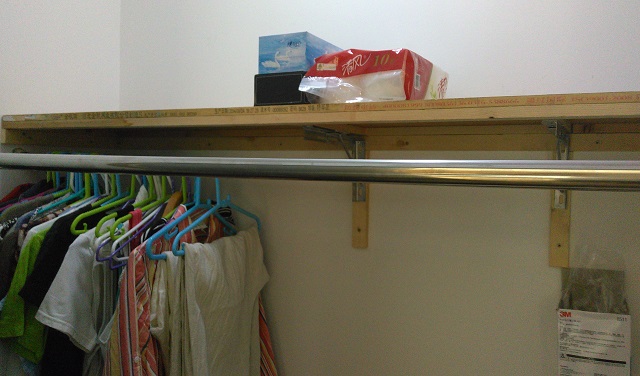 It has 2 clothes rods and in the above picture the front rod is hiding the back so you can't see the sag. The closet is 2.2 meters wide and the rods span the whole width without support in the middle, and it is rather thin pipe. So, if we actually put clothes in the middle of these rods, this is what happens: 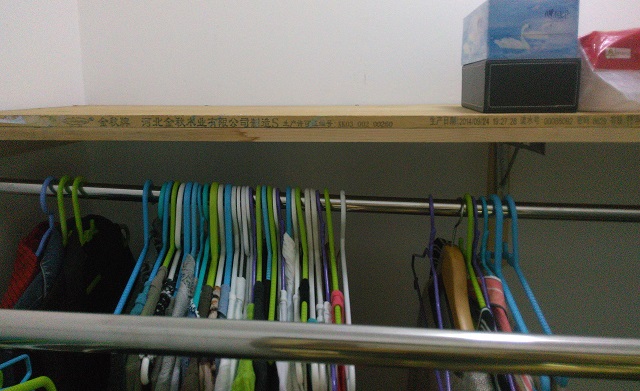 My idea was to use some plumbing pipe hanging strap to hang the rod off of the middle of the closet. But I could not find pipe hanging strap in any of the on-line shopping sites. Then Carole had the bright idea of using Zap strap. Yes I said the kind that has a screw mounting hole would work, so I ordered some: 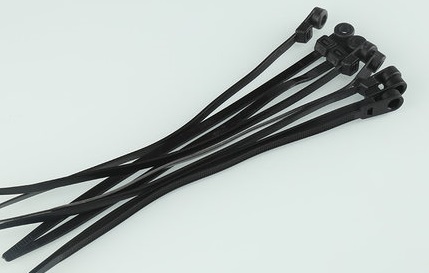 but this is what came: 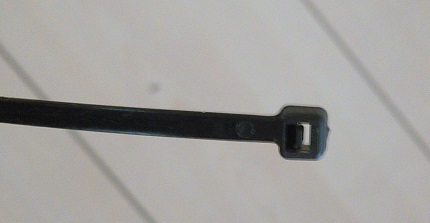 Not only does it not have the screw mounting hole, they are also 3.5 mm thick instead of the 5mm stamped on the bag. So, although our shelves are done, the project won't be complete until the online vendor sends us the right straps (which he said he would and we can keep the wrong ones - all 250 of them). In the meantime we keep our clothes pushed up against the walls.