Over the wall - MacGyver

I guess I'd better start with this carousel picture. Carole posted it in facebook and it got lots of comments and "likes". Apparently it hasn't gone "viral" yet but we're waiting.  However maybe some of you aren't following facebook so here is our well liked photo of me on the carousel, riding the pink horsie: 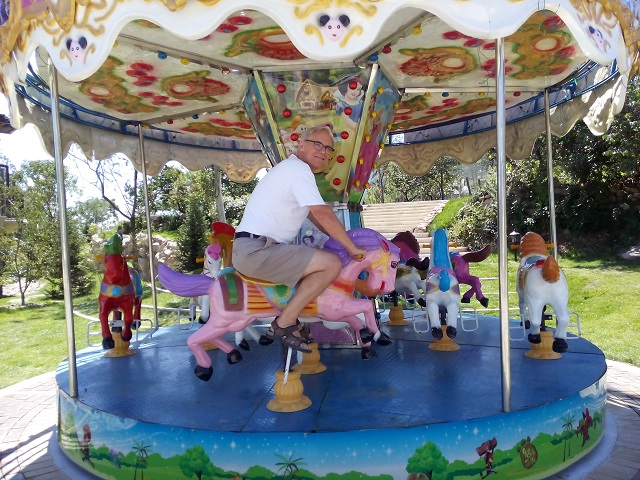 Before leaving for Canada we watched the builders making a round concrete and  brick pad across the road from us and we couldn't figure out what it was for. Now we know, as when we arrived back here 2 weeks later the carousel was on the pad. But the electrical connection is just a cord dangling from the carousel with no connection point or conduit built into the concrete pad to allow for a connection.

So now on to the real story of the day. One thing we got organized back in Canada was to have an official copy of our marriage certificate that we need in order to get my residency permit for China. That's another long story, but how it pertains to this story is that I had to make a trip to the visa office in Beijing. So we decided to make a 2 day outing of it and stop off to see the Great Wall on the way.

And here we are, on top of the great wall of China. There were a LOT of people on the wall so we chose to go in the direction that was slightly less crowded. Here in the background is the portion of the wall that was way more crowded than the part we walked along: 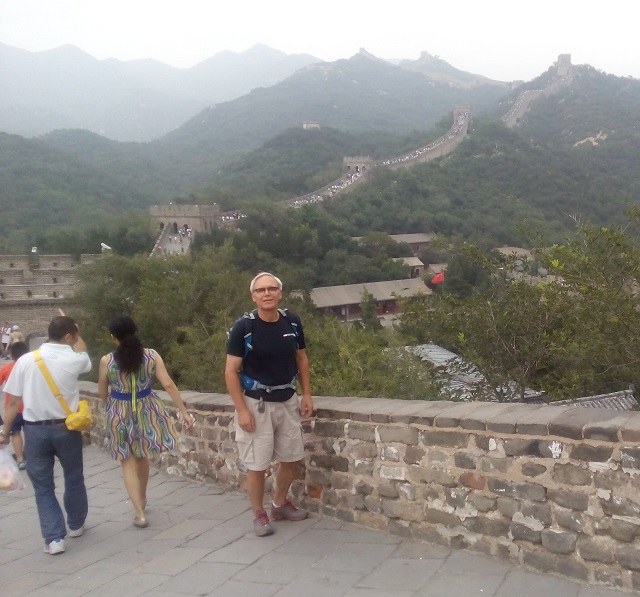 And a similar view with us a little further along our section of the wall. This was couple of hours later though, after the smog had rolled in so thick that here we can almost not see the crowded part in the background any more: 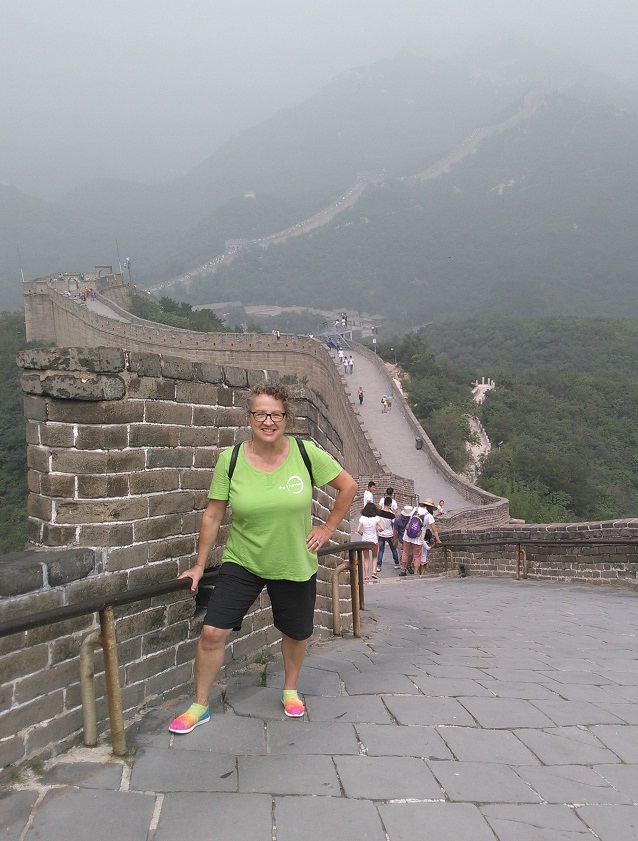 But, well before the above picture was taken we had a little misadventure. Carole got hot and wanted to stop right where we were to get out her hair clip. It didn't seem a great spot to me as the only level spot to set down and unload my backpack to reach the hairclip in the bottom of it was right on the edge of the wall. But that is where Carole got hot and wanted to stop so... we got the harclip but in the process Carole's bag fell over the edge. Now it was an empty bag - but a good one, a special one ...  As you might imagine this was followed up with an unpleasant discussion. Eventually Carole resigned herself to having forever lost her bag. But I was still intent on redeeming myself and getting the bag back. Unfortunately I dropped it on the hostile side of the wall - the side from which the Mongel hordes would have attacked - so there are no exits or staircases leading to this side. But I thought if we kept on walking we might find a way to get down on that side. Sure enough we reached a modern steel staircase that had been recently added to access that side of the wall. But look at the locked gates at the bottom of it: 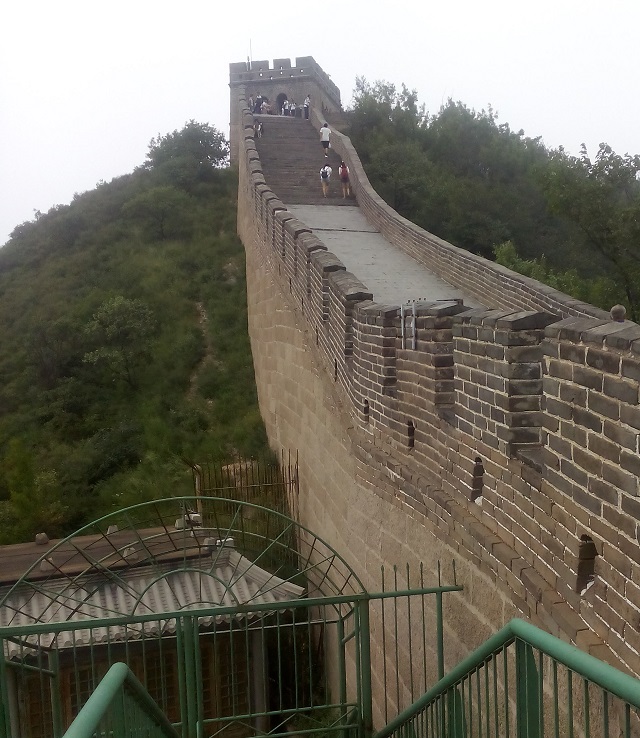 I sat there looking longingly at these gates for quite a while, knowing it would be a simple matter to climb over. But I also knew there where signs saying "no climbing on the wall" and there were policeman patrolling the wall, and China is generally not tolerant of misbehaviour, and I did not have a passport with me (it was already with the visa agent in Beijing). So the risk of what could happen if I got caught was just not worth it. You can also see here that it is quite a long way to the bottom - I'd guess about 10 meters. Oh, if only I had a long string and a hook... It didn't come to me right away but eventually I realized that we had a long string: 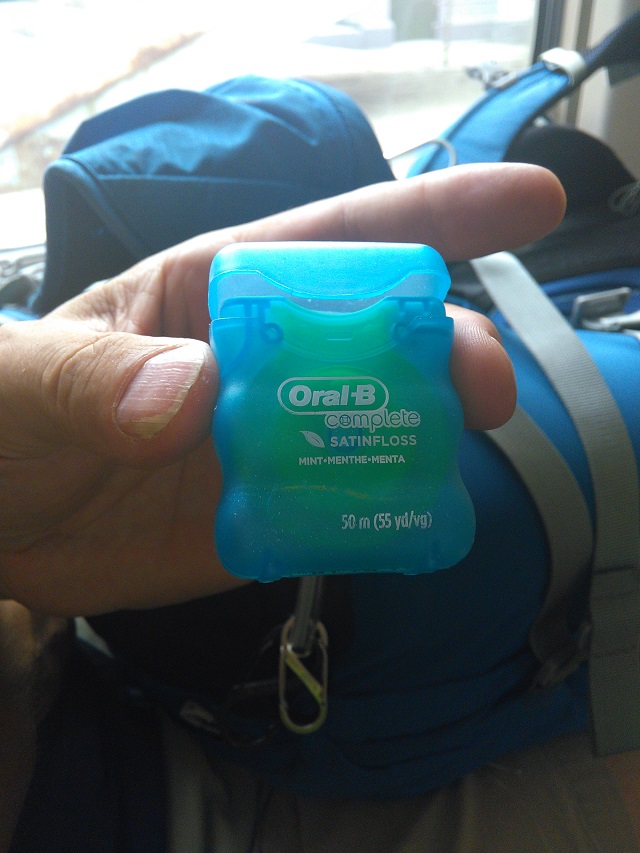 And if you look just below the dental floss I'm holding up, you can see one of the tiny carabiners I had clipped to my backpack in case I ever wanted to clip on to something. So I tied one end of a carabiner open to make a hook and tied the other end to the long end of the dental floss: 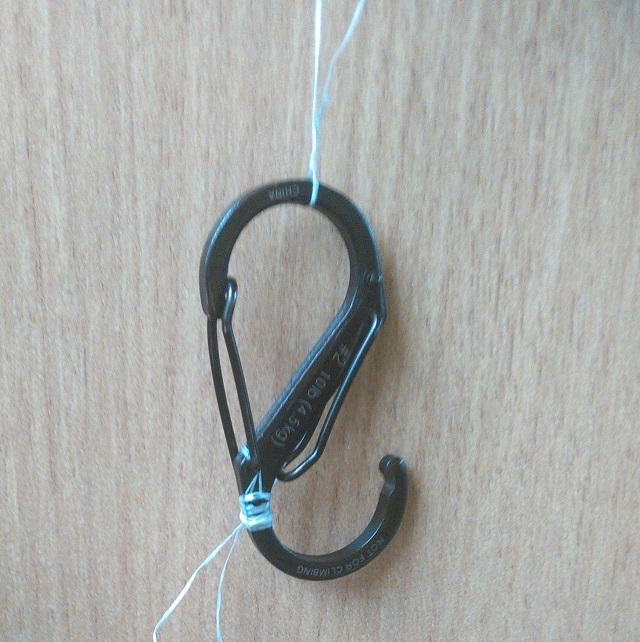 I figured I had a good chance of getting this hook cought on one of the straps of the bag if I just tried hard enough. As I was preparing the hook and line a few people gathered to see what we were doing. One girl in particular, after looking over the edge to see what I was fishing for, was really cheering for us to succeed. Anyway, I dropped the line, gave a little swing over to the bag and dragged the hook over a strap. I tugged, very carefully and to my surprise the bag was hooked on the first try. Slowly and carefully I lifted knowing the hook was really too small to completely surround the strap and if I bumped the wall too hard it would come off. Here we are almost up to the top: 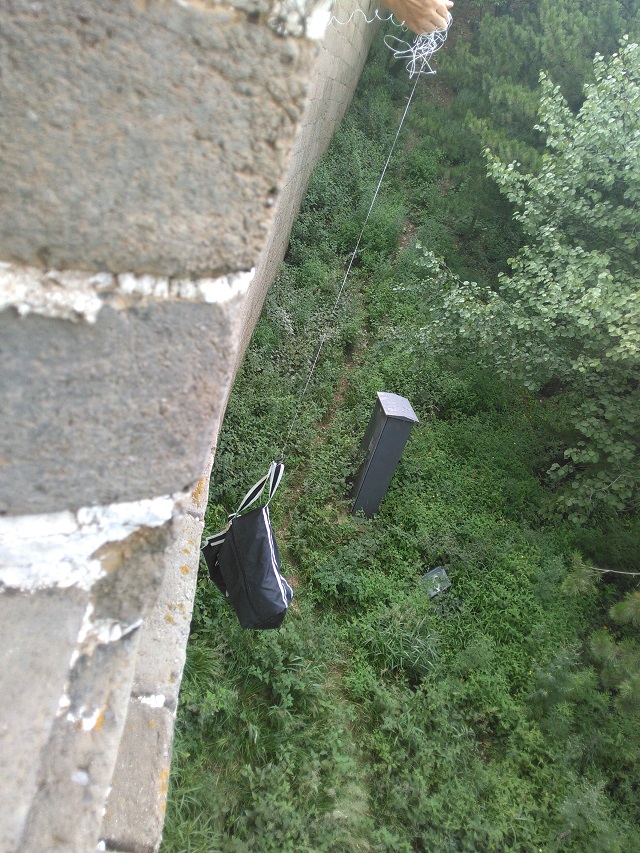 And finally within reach: 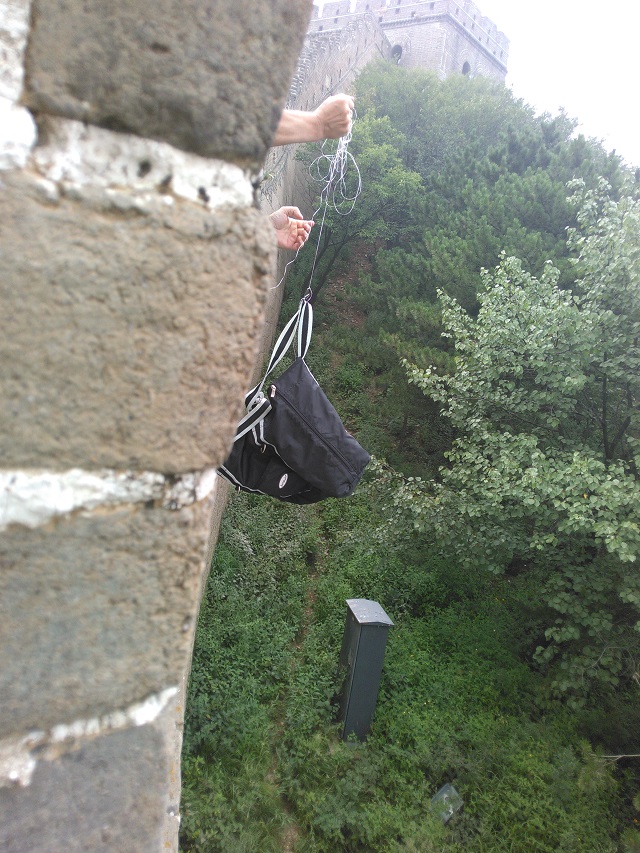 And finally success, with our cheerleader smiling in the background: 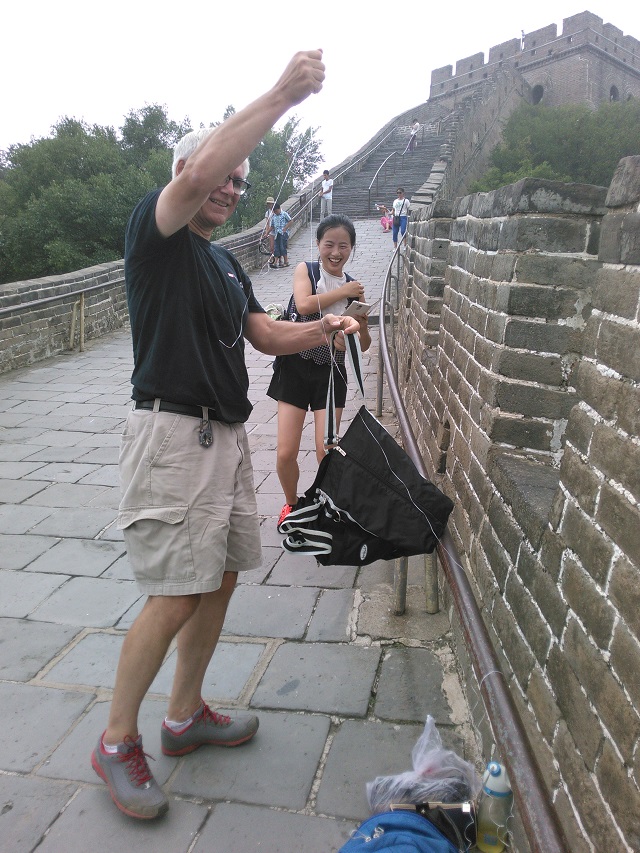 After that we had lunch and an uneventful train trip to Beijing. But then, remember I said that my passport was already with the visa agent. Well that was a problem because it is impossible to check into a hotel in China without a valid passport. I knew that but I figured if we made it so Carole is the one checking in and I was just her guest it should be OK. And as backup I had a colour photocopy with me of my passport page one and the visa page and the entry stamp page.

Not good enough. I was not allowed to enter the hotel period without a real passport or a temporary travel permit. I told them the visa agent had my passport and I was was to meet him the next day to get my temporary travel permit. Well that would allow me to check in to the hotel the next day but not this day. After a few phone calls we were told that we'd just have to back home and come back the next day. So we spent the next hour making our way back through 2 subway transfers to the train station and on to the train. One minute before the train was to leave our visa agent phoned us to say, "I am at the hotel with your passport." We jumped off the train just as they were closing the doors and spent the next hour making our way back to the hotel.

The next day I did successfully submit my passport along with a residency permit application and here is my temporary travel permit. 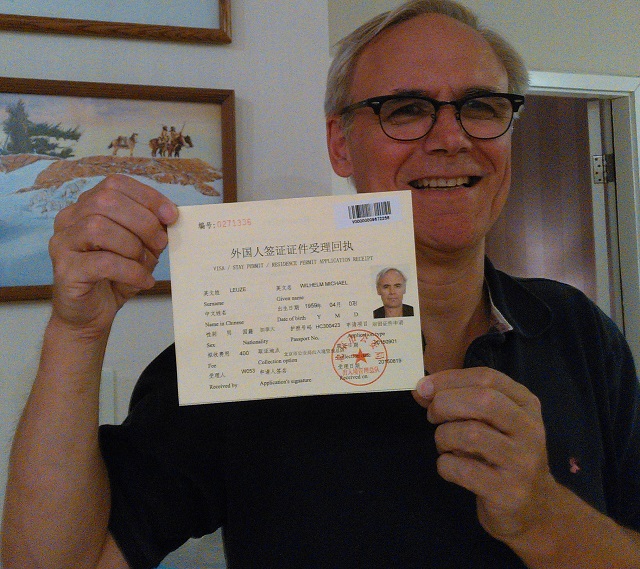 In the permit picture I am posing in a borrowed suit jacket because they didn't want me posing in a t-shirt for reasons unknown to us.  I can now legally cohabit with Carole at Jackson Hole for a full two weeks, at which point another phase of the adventure begins.

Posted by Unknown at 8:25 AM No comments: