We are warming up in the tropics now. Starting out at the airport we prepared ourselves by getting some Vietnamese money. Cool, suddenly we are millionaires: 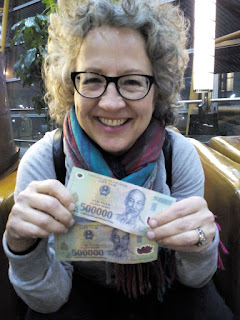 That was fun for a while but of course a million Vietnamese dong is only about 60 Canadian dollars. It took us a while for us to wrap our minds around paying 20,000 for a cup of coffee (even if it is excellent coffee).

So we arrived in Saigon Airport in the evening and were met by my foster brother Van who took us to a hotel and then back to the airport first thing in the morning to head to a beach resort island - Phú Quốc. And we are off: 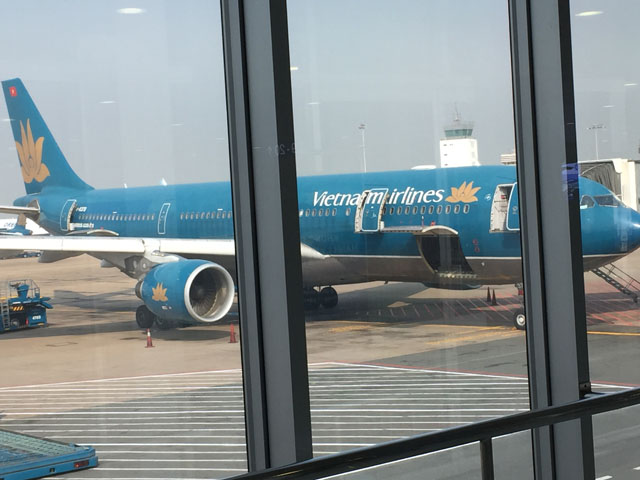 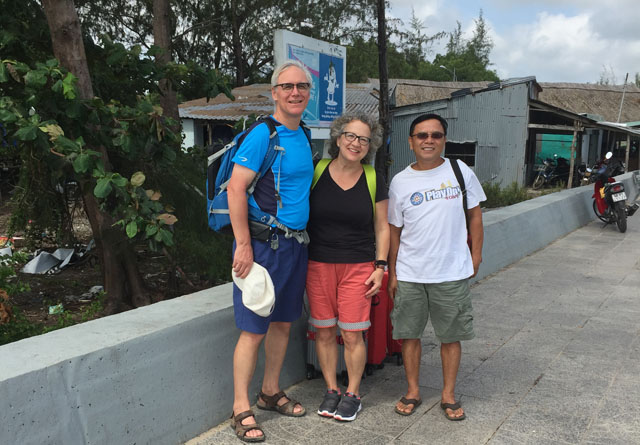 Here's the view from our bungalow: 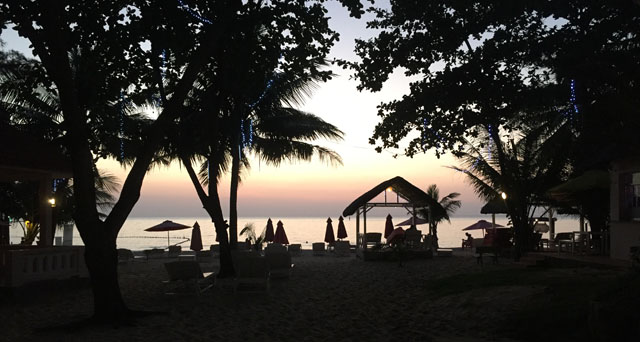 Việt Nam is very motorcycle friendly country. At least 95% of vehicles on the road are motorcycles. Whole families of 5 go on one bike. Motorcyclists carry every load imaginable (or beyond imagination). This photo was actually taken in Sài Gòn, but I'm sticking it in here because I don't have a photo of us on the motorcycles we rented to tour around the island. 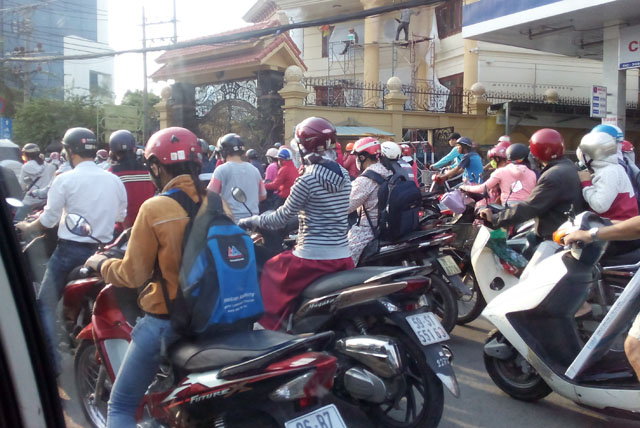 We had lunch at a beach on the south east side of the island, directed here by Van's great uncle in-law. This beach is much cheaper than the one we stayed at, and is not raked clean every day, and it is not packed with Caucasian tourists. Where we stayed is full of Russians, Germans, Australians and various other white folks. 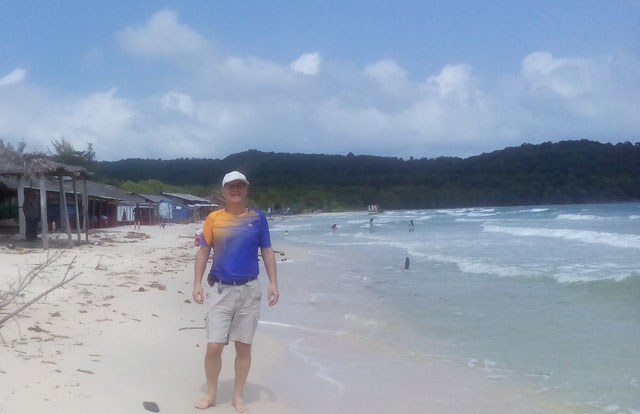 We also visited a site that was used during the war as a prisoner of war camp to hold and torture prisoners. They had figures in poses recreating some of the torture and cruel treatment. It was hard for all of us to see this - we did not stay very long. 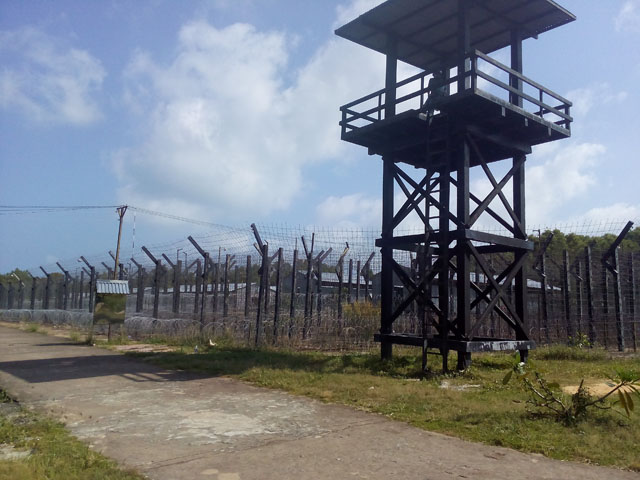 Back at the touristy west side of the island, there is a night market just a few minutes walk from our resort. Here we are picking out our seafood dinner: 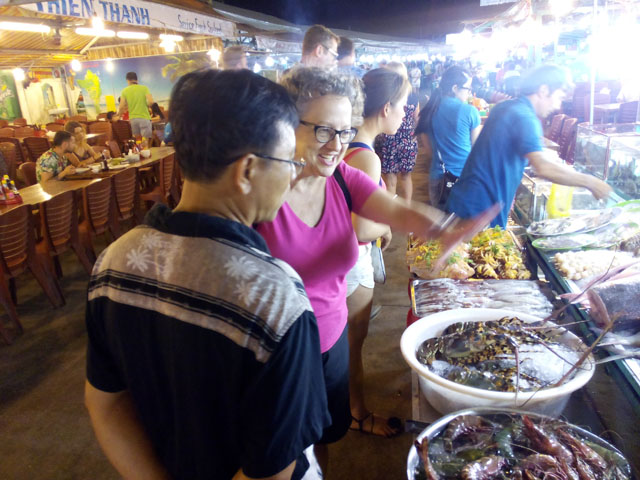 After 2 days, on the island we took the speedboat to Van's Hometown, Rạch Giá. 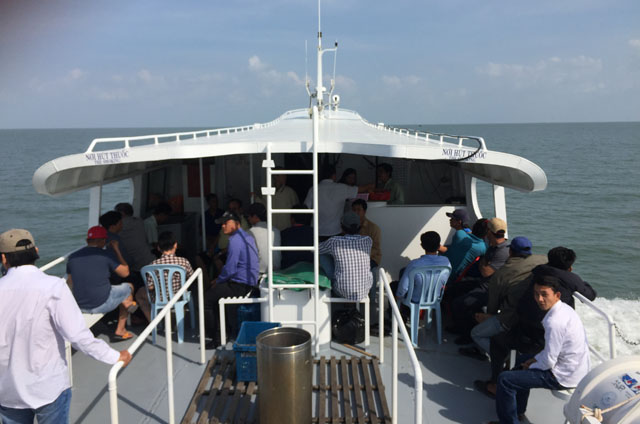 The 120 KM trip is only 2-1/2 hours. Van was telling us he used to accompany his dad on his boat making night trips to the island delivering food for the prisoners, the trip took 10 - 12 hours in a traditional boat 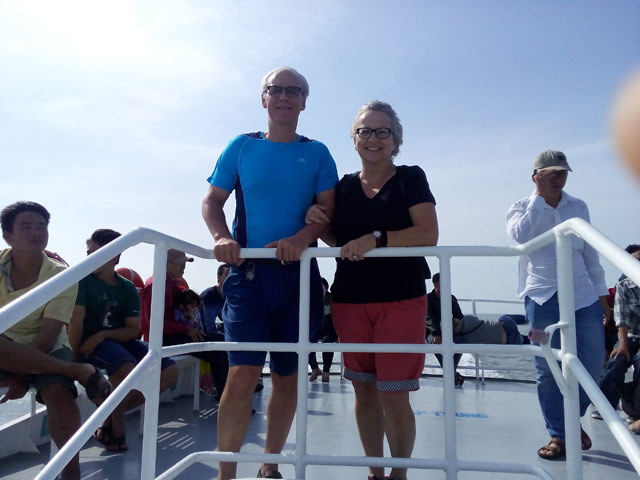 Once at Van's hometown we ate more seafood of course. We also went to visit his deceased parents house were his younger brother still lives: 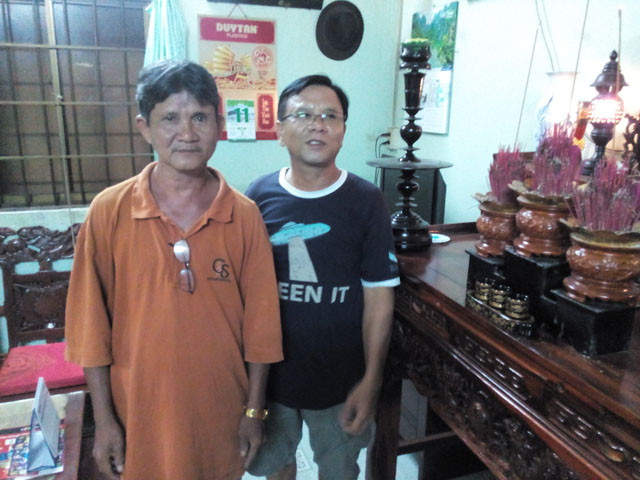 After a day in Rạch Giá we took a taxi 35 KM south to Van's retirement house. It is in the country side, between a canal and a rice field. Here's the house: 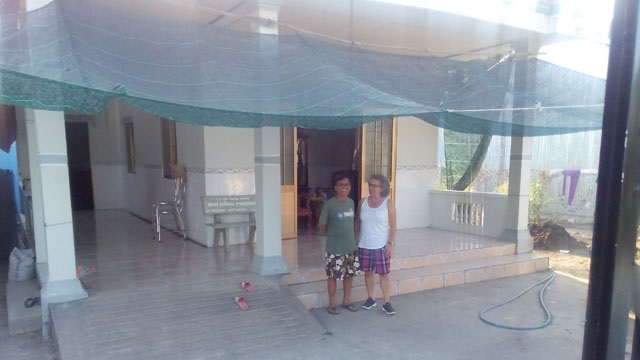 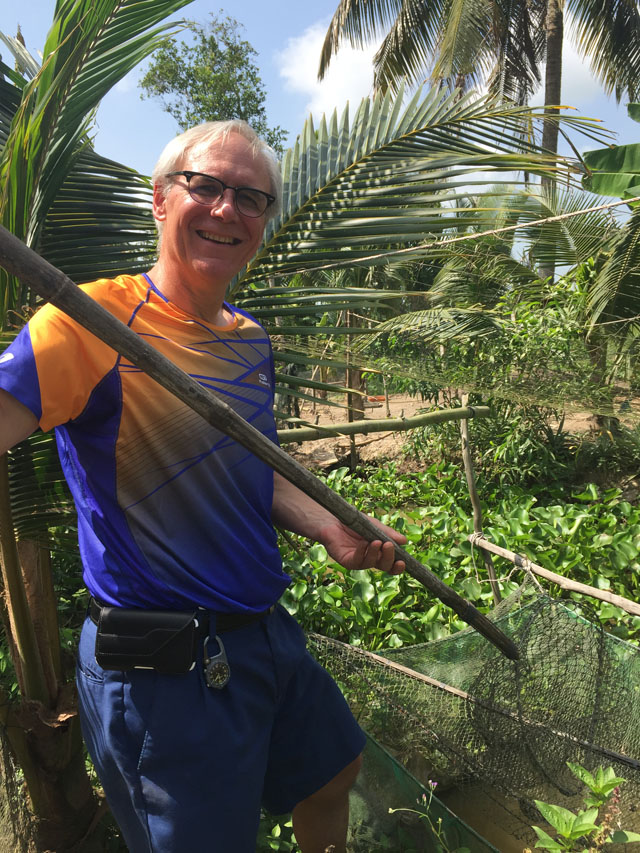 easy catch (the clams were from the market): 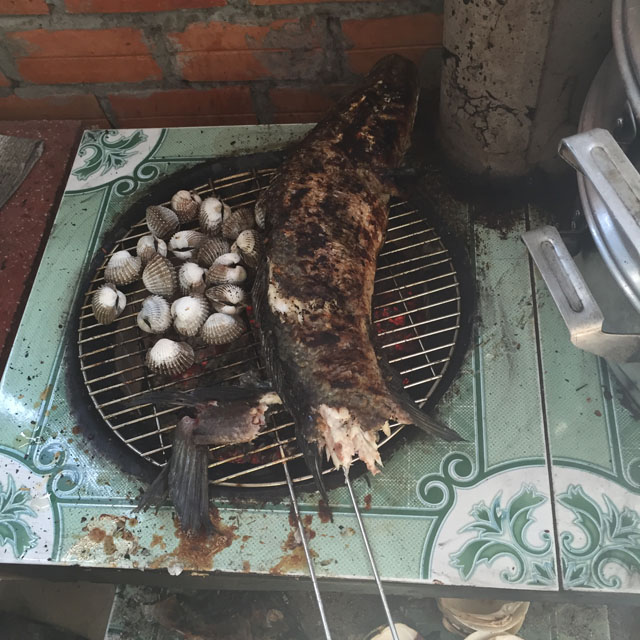 Still in the backyard, pulling down coconuts for a refreshing drink: 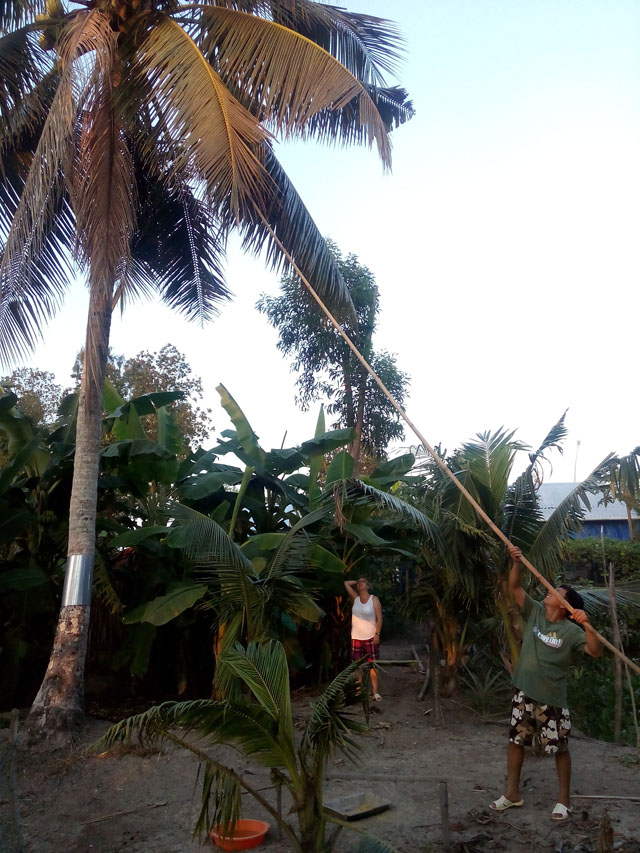 Here's the end of the day, looking at the rice field through the ferns marking the the back yard property line: 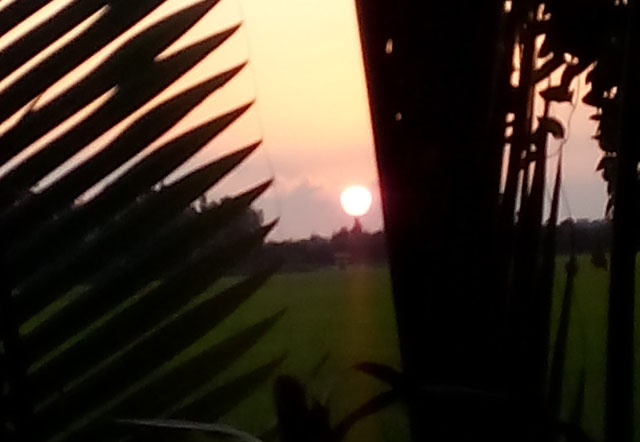 And then, we needed a place to sleep. Van's house is quite small but there is a roadside motel within walking distance. It's a very small motel and we are probably the first (and maybe last) foreigners to stay here. Not your typical tourist hotel, but we really only needed a bed (and this one was  only $10/: 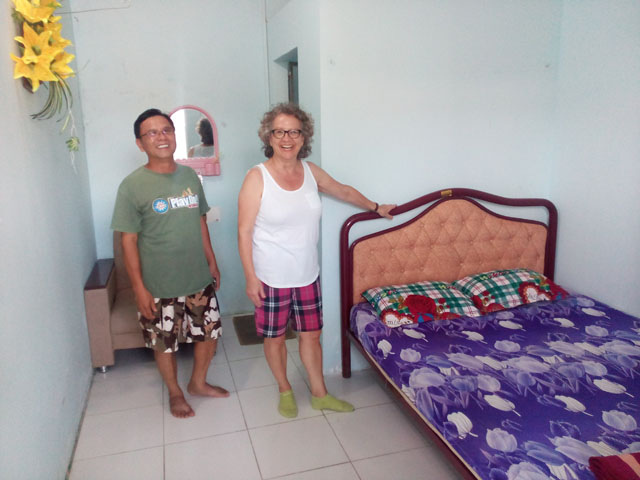 above, on the wall behind Van you can just see the edge of the bracket and pipes where there used to be a sink. As for the rest of the washroom: 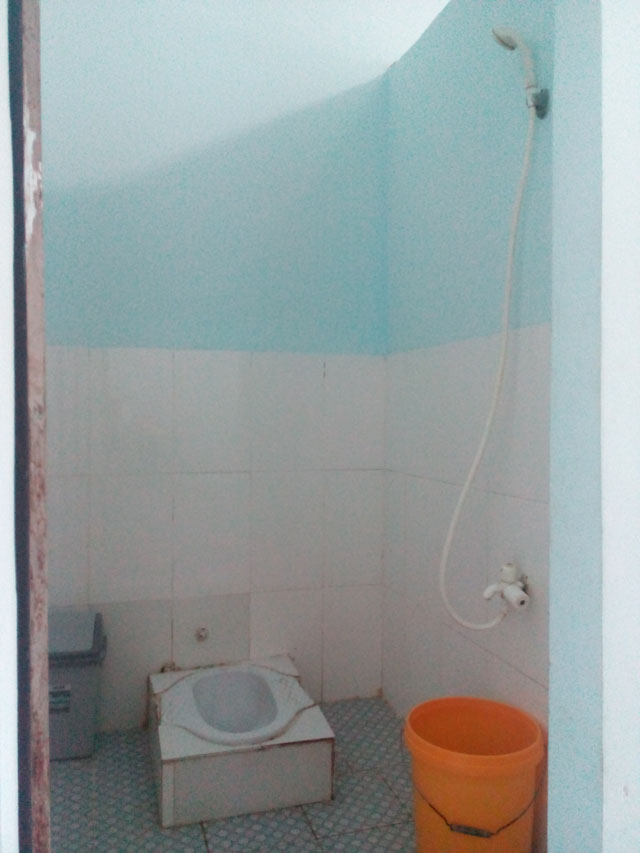 The next morning after practicing making coffee with our new Vietnamese drip coffee filter, we headed to the market. We followed the path along the canal.  There are quite a few small bridges over the canal. Many of of them are built by the homeowners facing the canal. This type of simple, single log bridge is called  "monkey bridge": 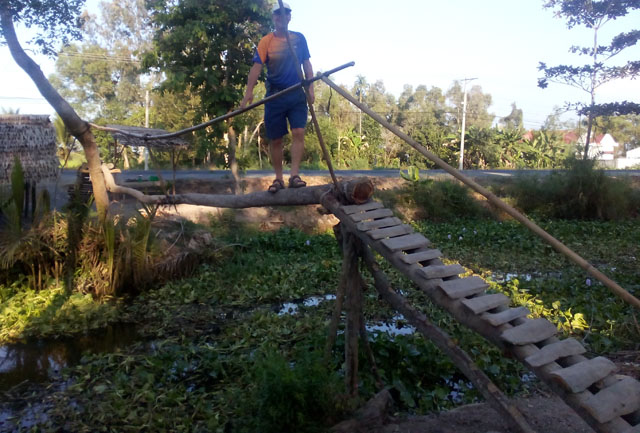 There are some much better bridges, one just has to keep walking to find a good one: 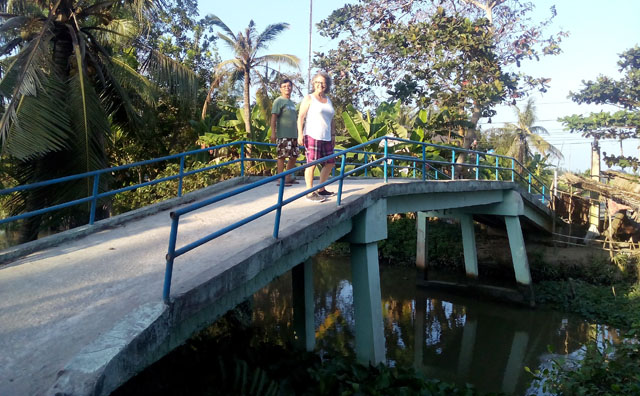 And this is the bigger canal (the village market is just to the right of this):

Now of course in this little village, white folks are never seen so every where we went people would smile,  watch or follow us, and call out "Hello". The main reason we went to the market was to get a passport photo taken for our visa's in preparation for our trip to Cambodia. Here is where it happened, complete with audience We then went for coffee while we waited for the shopkeeper to photoshop and print the photos: 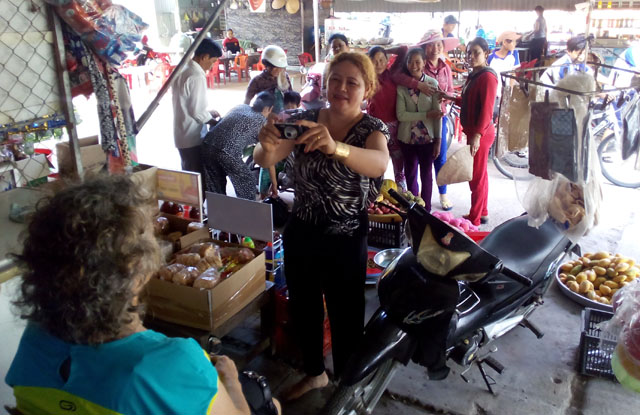 Fast forward to next day, we are spending the day in Sài Gòn waiting for the bus to Cambodia which leaves at 5:00 am. Now our Hotel is in the western outskirts of the City, not at all tourist territory. We didn't see any Caucasians the whole day here. I found a place to get a hair cut. Although you can't see it in the picture there is an audience watching, just like for Carole's photo: 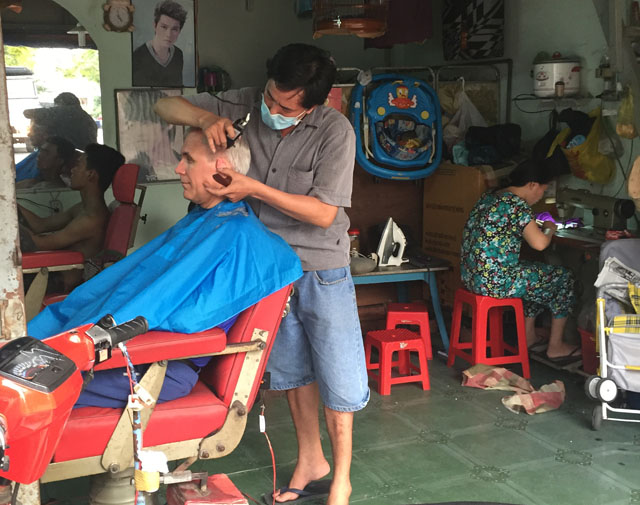 Tonight we're going downtown for dinner, then back here for a short sleep before catching the bus to Siem Reap, Cambodia
Posted by Unknown at 1:05 AM No comments:

Well, everyone here is getting ready to go to their hometowns for Spring Festival (the big Holiday surrounding Chinese New Year). So we will be going too as everything here will be pretty much shutdown until the end of February. We'll be glad to be getting away from the cold. And before heading back to Canada we'll be spending almost 2 weeks in sunny Vietnam, much nicer weather: 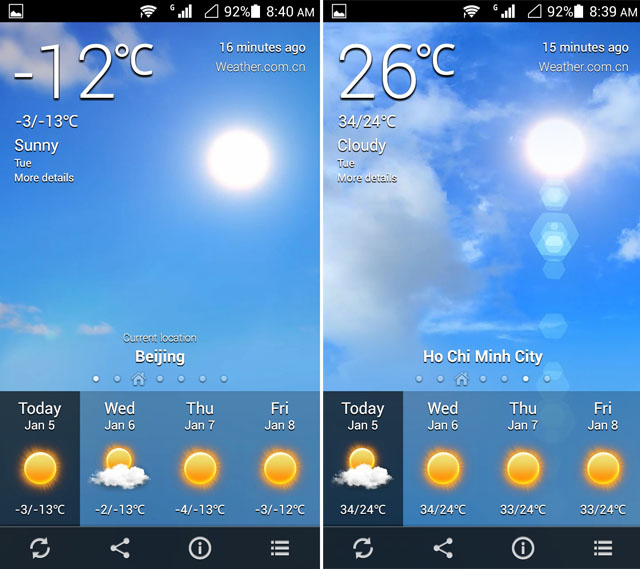 We had a lovely New years day workshop here. Including a Haven style choosing a word or theme for the coming year. Here's ours: 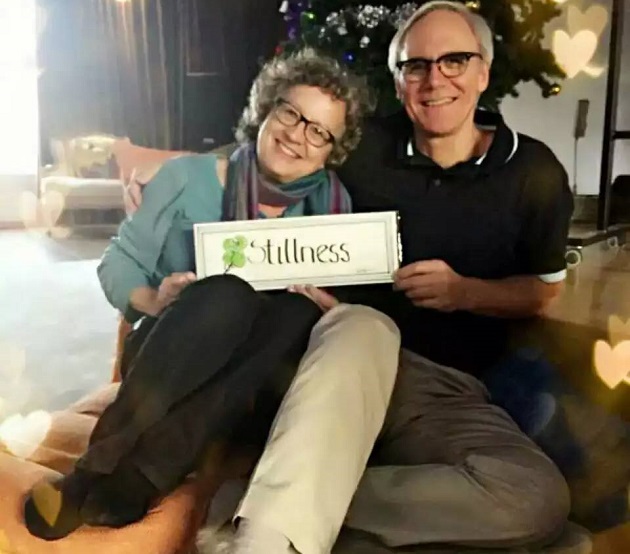 We had a table with art supplies where people could make their own word cards. Little did we imagine how popular would be the glitter. Everyone but us made their words with glitter: 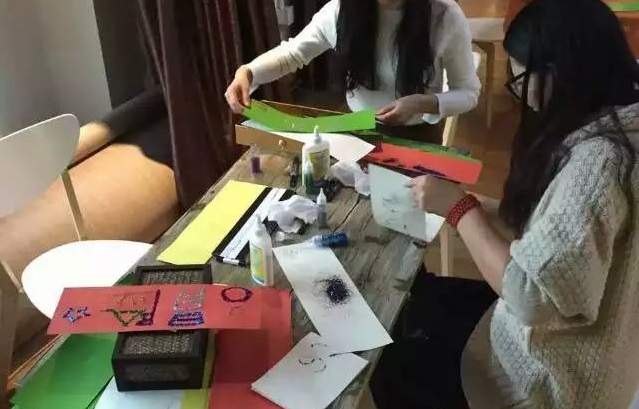 The last 2 days here there was a film crew videoing us as part of a major promotional video for the next development phase of this town/resort/whatever it is. Carole who has experience being an "extra" on film sets in Vancouver said it is quite a similar setup: 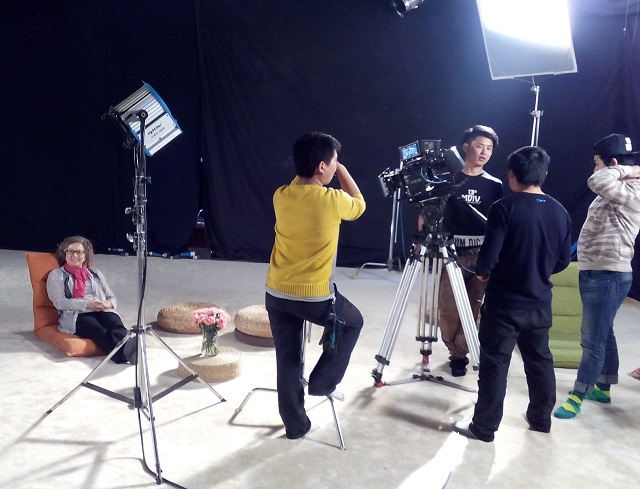 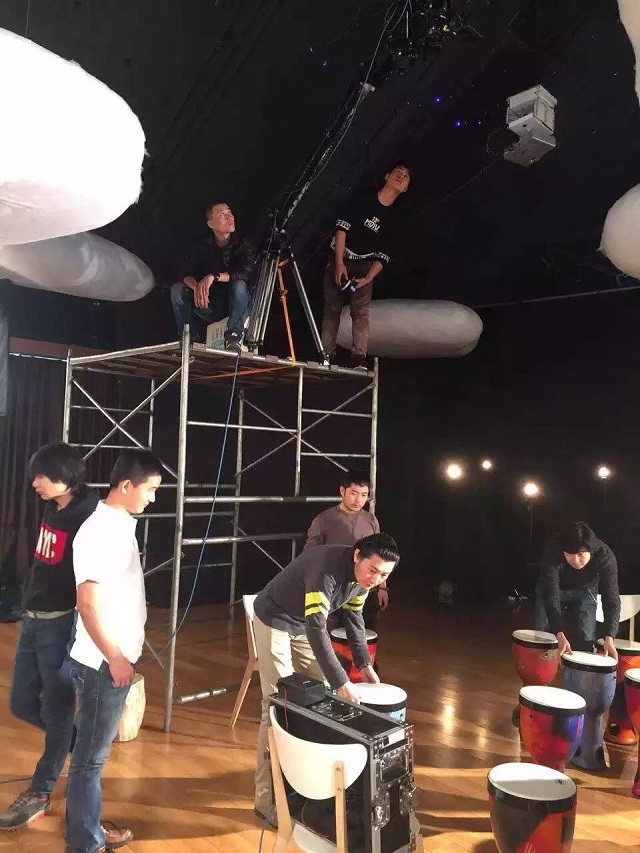 And finally, I discovered a wonderful new food known as "mandarin oranges". I saw them for the last couple of months in the markets and stores but didn't buy any because what I remember of the Christmas boxes of mandarins in Canada is, well, all right but it's not my favourite fruit. Finally two days ago we were out of fruit and this is what was available at the local store: 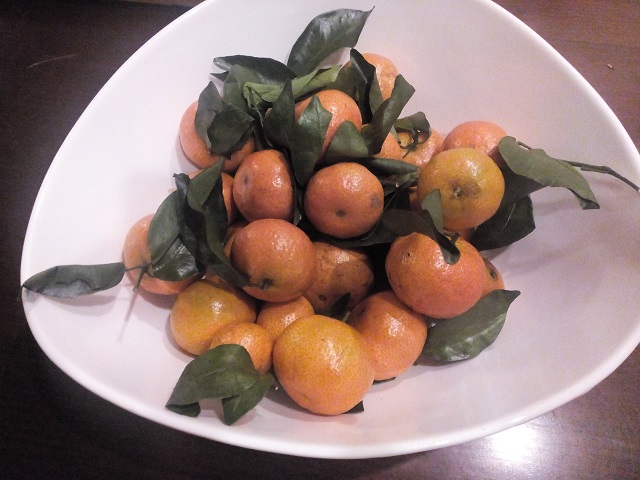 They are soooo delicious, sweet, juicy fresh. mmmh, mmmh. What a difference when they don't have to get boxed up and shipped as freight to Canada. We ate them up and went back for more.

And now its time to pack. Our plane leaves at 6:45 tomorrow morning which means we are leaving here 2:45 am. I guess we'll try to sleep on the plane.

Best wishes to all for the Year of the Monkey, which begins soon.
love Bill, and Carole

Posted by Unknown at 5:31 PM No comments: