OK, so I am stuck here in a tiny town at the bottom of a mountain valley. There is no way to get out of high gear so clearly the motorcycle needs to be repaired. At this point I don't even know if its a major repair (engine disassembled to access the transmission) or not. But the rest of my context at that time is that it was only 2 days before the start of the national day holiday. Note that this holiday is not just a long weekend - it is 7 whole days. My worry is that if I find a way to get this motorcycle to a shop somewhere, it'll just sit until the holiday is over - and I'll be stuck having to wait there for it for I don't know how long and there are practically no hotel rooms available during this holiday period.

So I figured the best solution was to ship the bike to a repair shop in Beijing. Then at least I can wait for it at home. Nothing is simple in China. It took 12 hours to arrange shipping. By the time the truck came to pick it up it was dark. And then they had rules that they could not transport anything with gasoline in it so here we were looking like a bunch of hoodlums siphoning gas out in the dark: 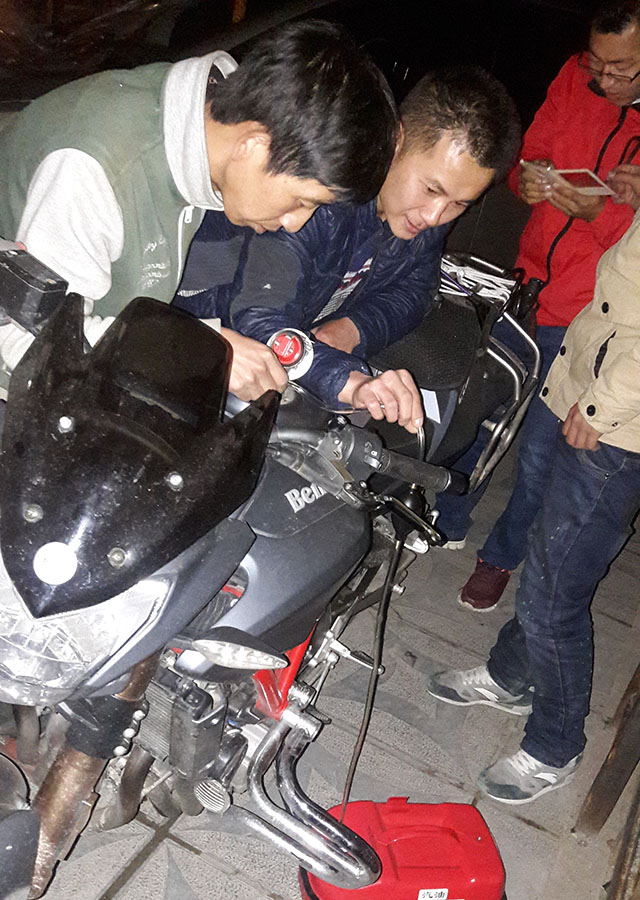 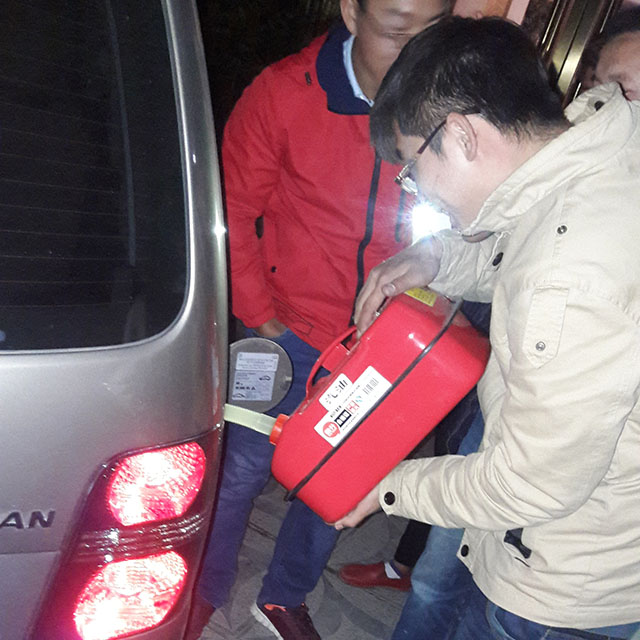 Then, I was surprised to learn we aren't loading the bike in the truck right away. Instead the bike is to
be pushed to their shipping depot which is 2 kilometers away. I helped them push it over the hump of the bridge then left them to take it the rest of the way on their own. 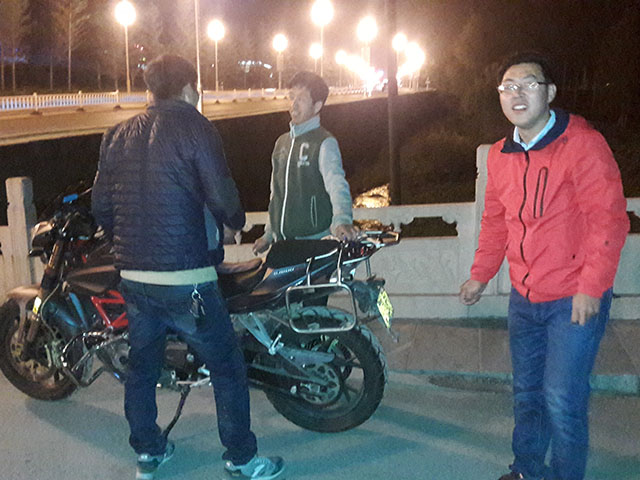 24 hours later the bike was being dropped off at a service shop in Beijing and I made it there at 10:00 am the next morning to find out what the situation was. 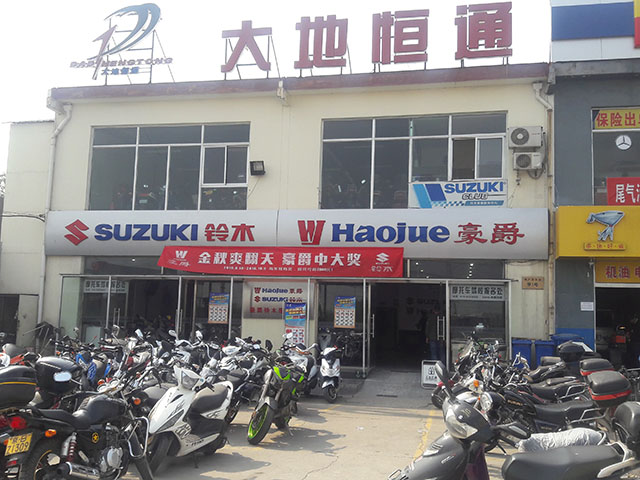 They ripped out the clutch, shifter shaft and selector drum and said it all had to be replaced, they had the parts and would be done in 3 hours. Well I'm not so sure it needed the clutch but I wasn't about to argue the point, I'd already paid more in shipping charges than what they quoted for the repair. 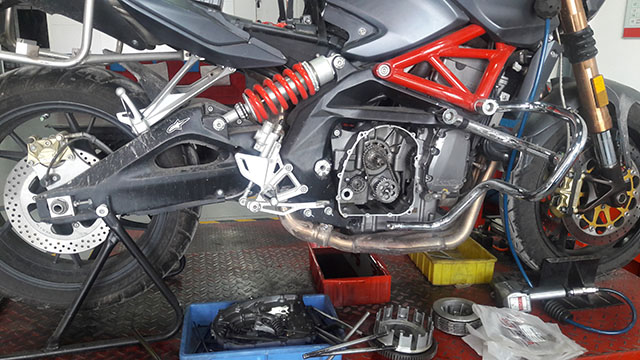 And sure enough, it was ready in less than 3 hours. I drove home and it was running perfectly. So I did some repacking and headed out first thing in the morning. Since it was now the very first day of the national holiday and expressway tolls are free for the holidays so I was expecting traffic jams. I left at 5:00 am hoping to avoid them. Of course by the time I got to Beijing it was 6:00 which was right about when 40,000 other motorists thought they'd leave to beat the rush. Even with all my baggage packed, I could still squeeze through the traffic jams and once clear of Beijing, the expressways were free flowing. Along the way I met some other bikers taking advantage of the free tolls. 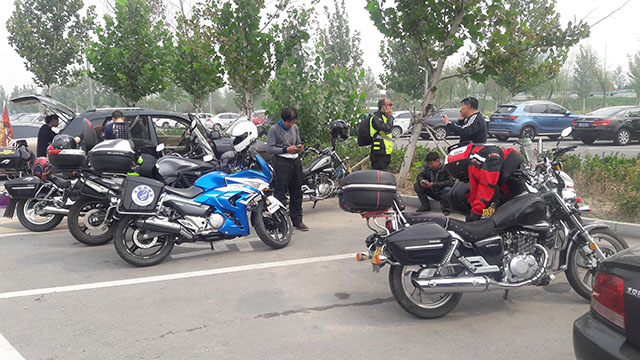 Because of the time lost for repair, I had to skip a mountain. As much as I wanted to go to Hua Shan, that was the obvious choice to skip as it would be somewhat of a nightmare during the national holiday. So I went straight to Song Shan which turned out to be a great choice because it was not too crowded at all. In fact I never had to wait for people in front of me to make it through a section of path. Like the expressways it was free flowing. Every mountain has its claims. This one apparently is where Lao Zi wrote the Tao Te Ching 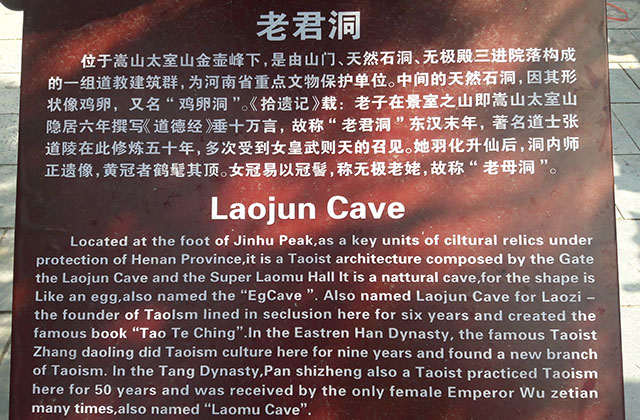 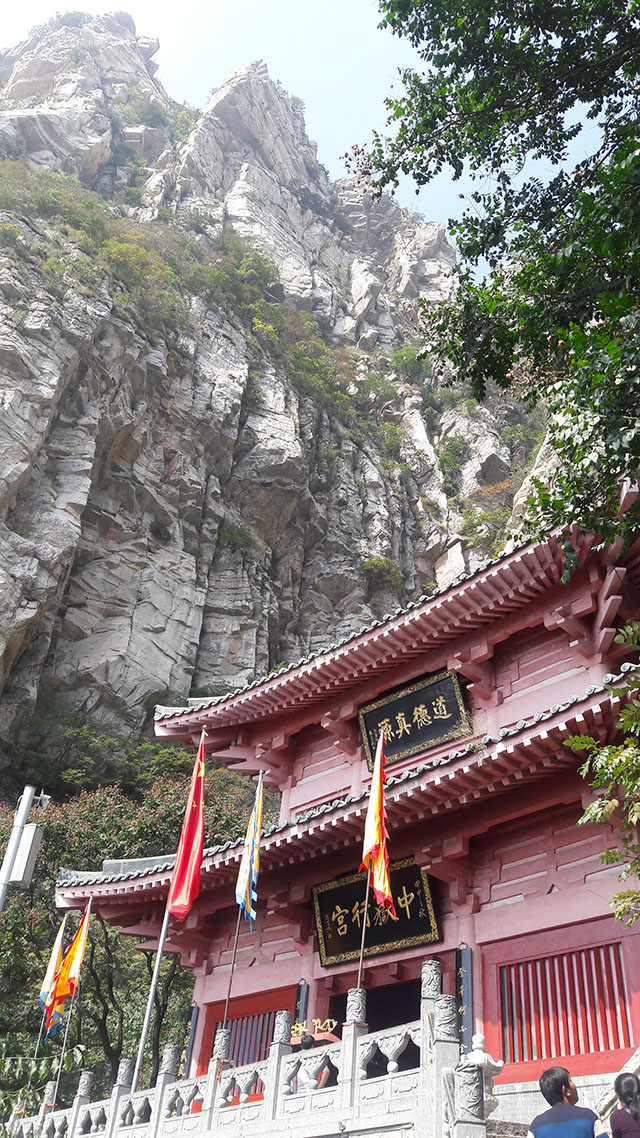 view of some temple areas from above: 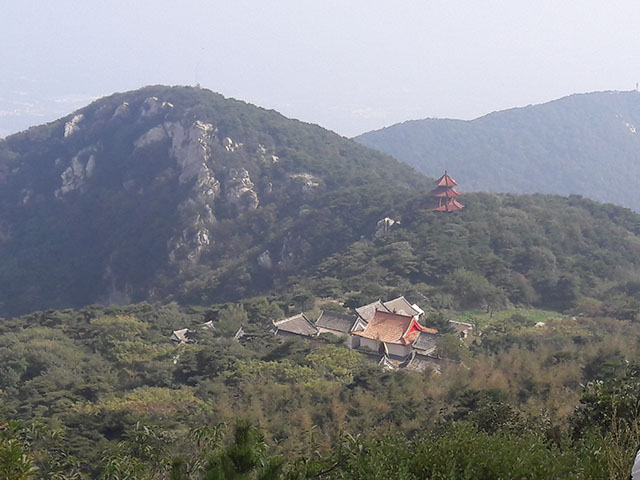 The only actual traffic jam on the mountain that day was at the very summit where everyone was clambering to get their photo taken with the summit stone. 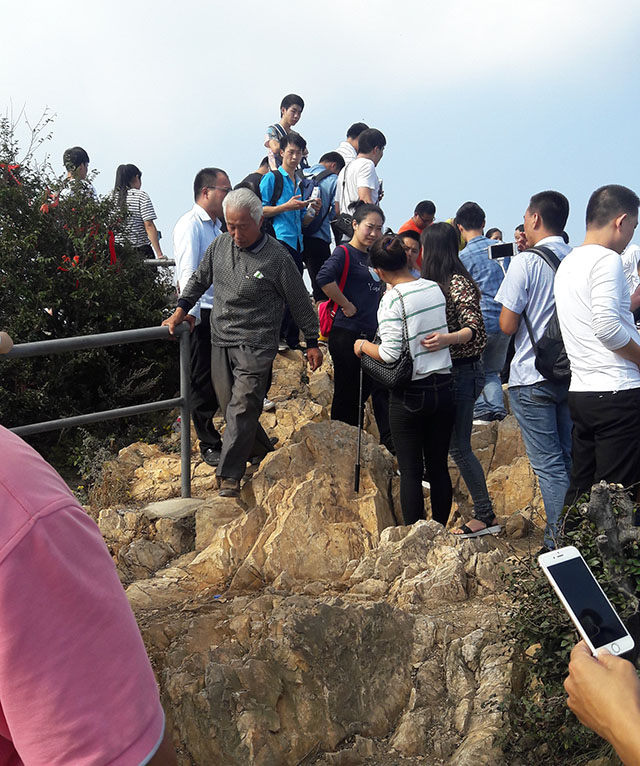 I said it was very steep. It is staircase all the way up. most of the flights of stairs are 10 times longer than the one pictured below. Of all the famous sacred mountains, this is probably the only one with no cable car to the top (no, I know TaiShan also has no cable car). The never ending stairway is the only way up. Even the water and coca cola that gets sold at the top has to come all the way up these stairs. I'll bet most people buying coke at the top don't appreciate why it is so much more expensive than down below. This guy certainly does. I wonder how many trips he makes per day? 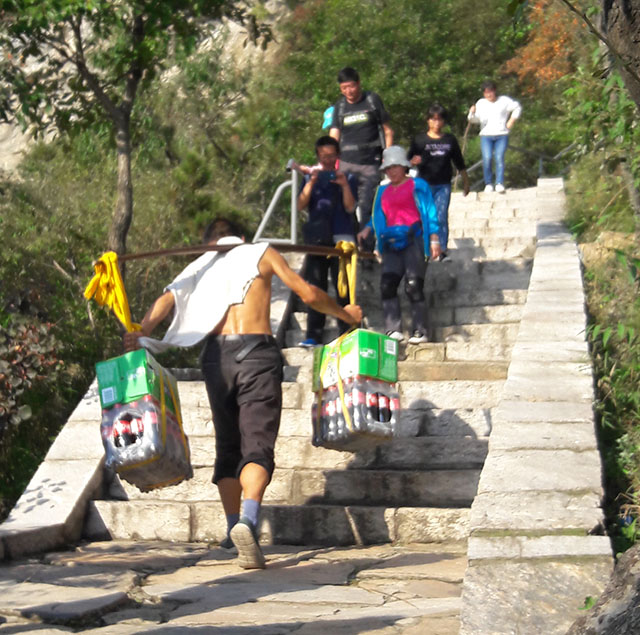 Now another thing this area is famous for is the Shaolin temples. They are right down in the valley below the mountain. And it turned out my hotel was right in the middle of the Shaolin temple park. This made it almost impossible for me to leave in the morning and to come back at night because I was going against the flow of thousands (possibly tens of thousands) of tourists coming to see the famous Shaolin temples. There are also many Kung Fu schools here, In fact my hotel was actually a Kung Fu school that had a few rooms to spare.Here are the students heading to their morning exersize area while I'm packing up the bike. 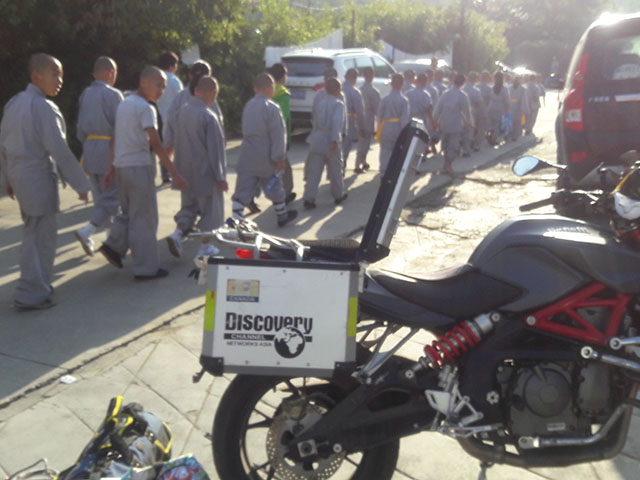 next stop is Chengdu which is more than a one day drive even on the expressways. I don't get very far at all before I notice the bike is leaking fuel. What now? Well, even though it was a holiday we managed to get a repair crew out on the highway to help me. It turned out to be ridiculously simple, a fuel hose that was not properly clicked in to its mating pipe. Once the fuel tank was removed, it was a one click repair. 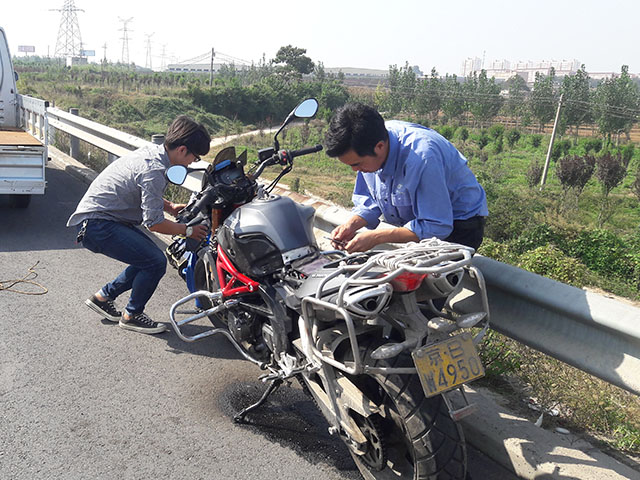 but was this an omen of things to come? Apparently yes, because on arrival at my hotel in Chengdu, I found fuel leaking again. I figured at least now I know how to fix it, so I started removing all the trim in order to access the fuel tank. Then I discovered the hoses where all secure, it was the fuel tank itself that was leaking. Nothing I could do right then but drain the fuel and let the bike air out for a few hours till night time when the hotel manager insisted I bring my bike into the hotel. So here it'll sit, in the middle of the hotel lobby until I can get a new fuel tank. 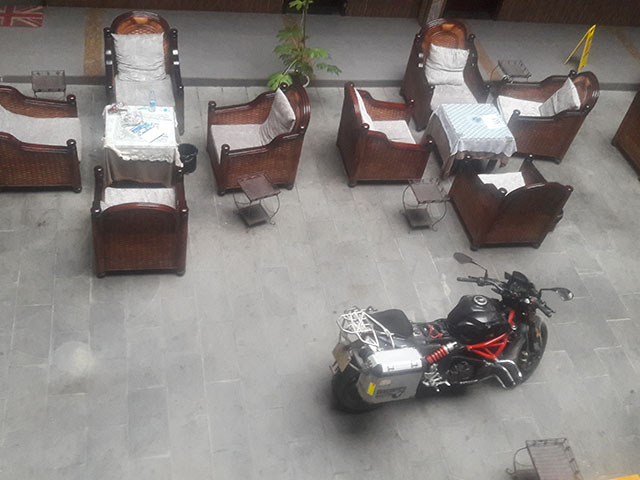 
On to Part 3 of the Sacred Mountain Moto Tour >