I had some company at this hotel. Steve, a member of the Chinese motorcycle forum I belong to, joined me here the next day. He was very helpful and supportive of me and my situation and his Chinese wife was instrumental in ordering a new gas tank for me. And Cristina from Spain arrived by train the next morning so we hung out together for the day. 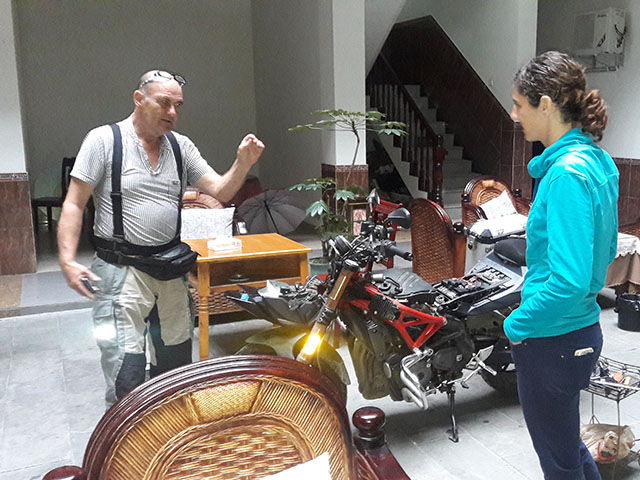 Well I came here to visit a QingCheng mountain and actually so did Cristina. Even though it was pouring rain, off we went. It was actually walking distance to the base of the mountain but we took a taxi since it was raining. Here I am in a courtyard at the bottom of the mountain: 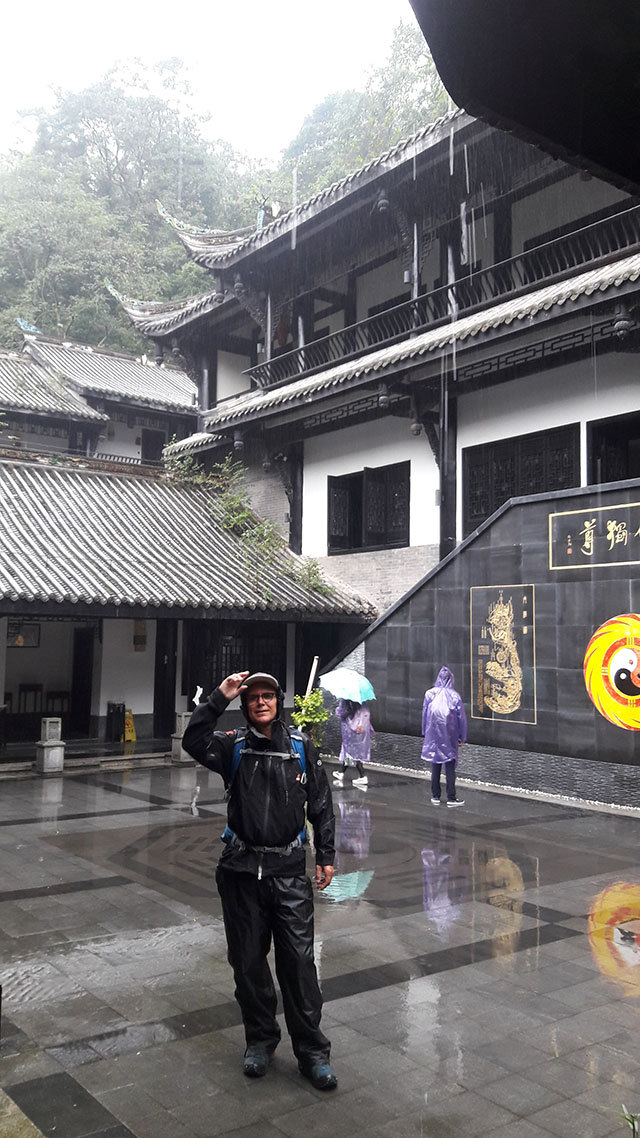 We just went for it, even though there was a cable car option, we hiked all the way to the top by foot, in the rain. Here's the top: 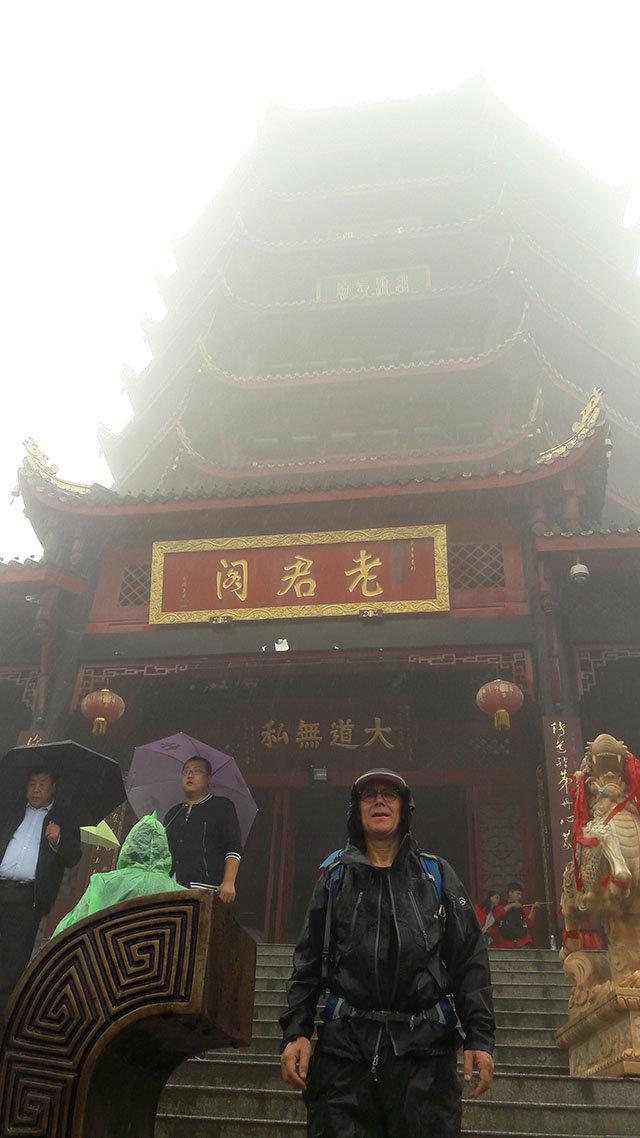 At the bottom, on the way out there is an option to take a boat across the small lake rather than walking around. We walked around and then all the way back to the hotel. 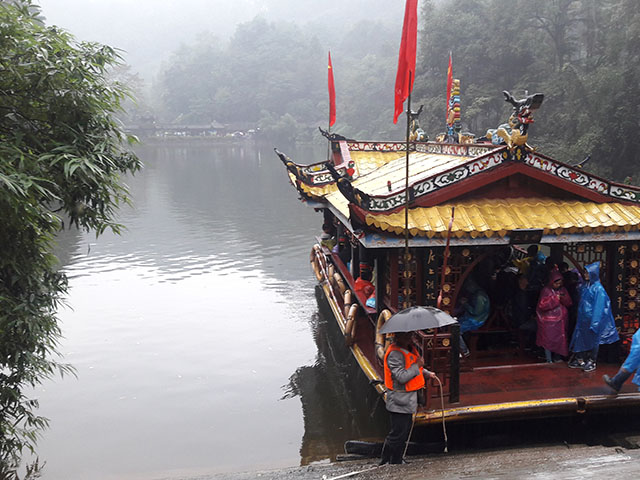 I Paid for express air freight and wouldn't you know it, The gas tank arrived that afternoon after our hike. I put it on the motorcycle as soon as it arrived: 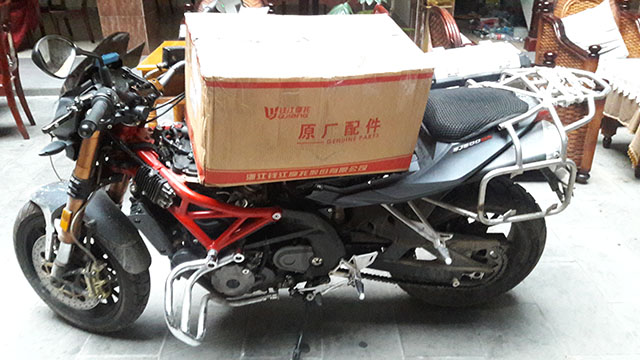 There was one small issue with the installation. The front mounting bracket of the fuel tank did not quite fit, I had to force it to fit. It was as if the gas tank was a little bit shorter than the old one. (hmm, is this another hint of what's to come?) But the the tank did come together in the end and we left the following morning. Steve went with me to the next destination which was only about 3 hours drive away. Still raining. 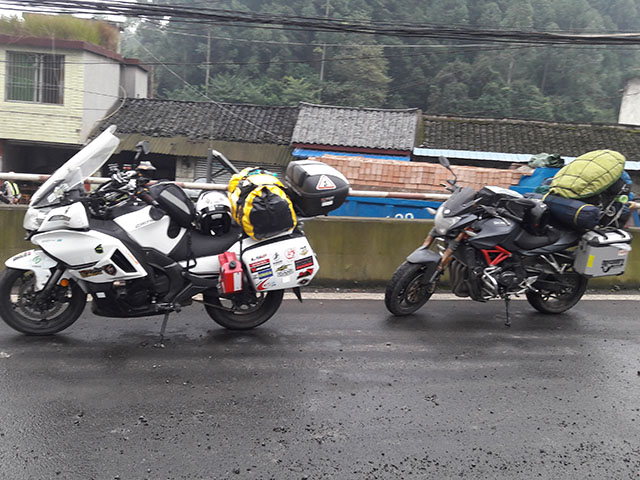 Our destination was EmeiShan, Another sacred Buddhist mountain. Steve is a 2 pack a day smoker so we took the cable car up. Here is the top, still raining: 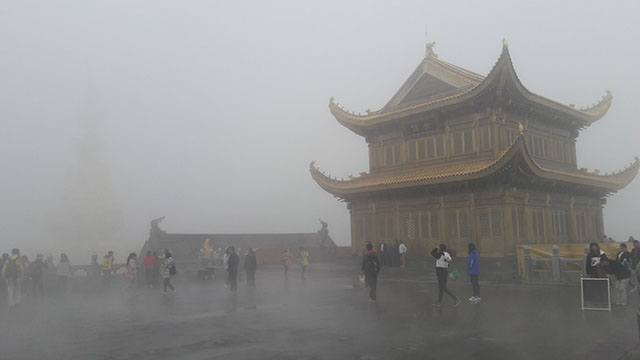 in the left of the above photo you can almost make out the gold statue in the center of the summit. Here is a closer photo of it complete with the six tusked elephants which have a story in this area. Even from this close we can just barely see the statue. There was definitely no panoramic view from the summit. 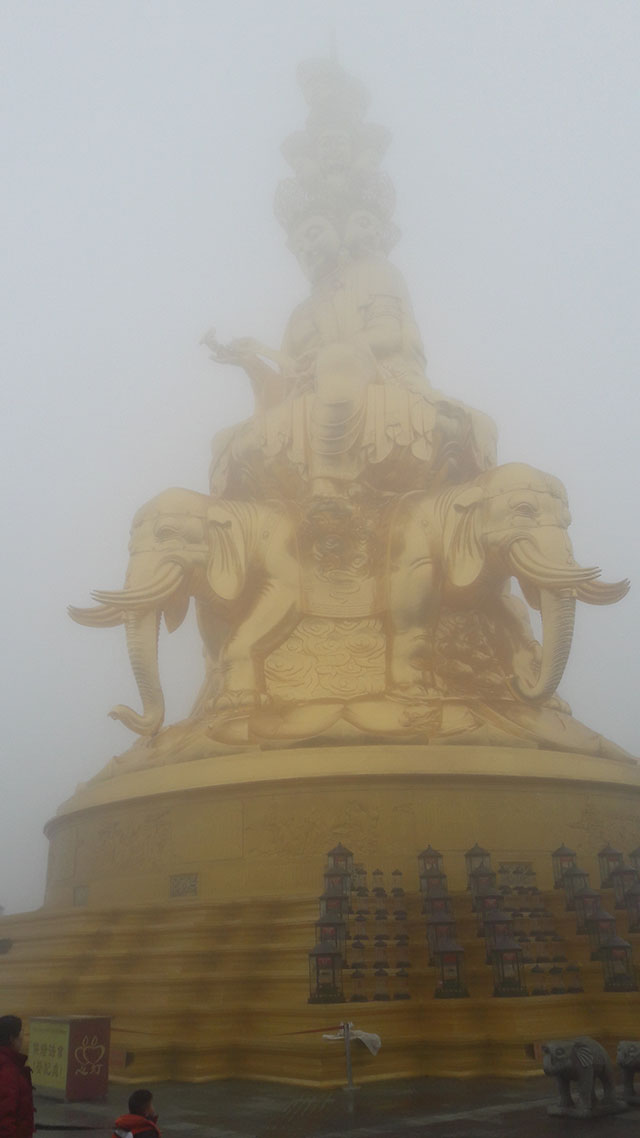 On  the way down (we did some walking because the cable car doesn't do the whole route) we saw some of the monkeys that are another feature of this mountain. 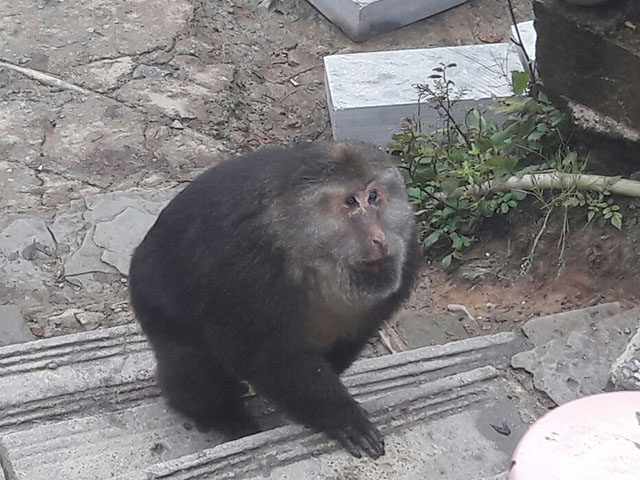 And here is the queueing area for the cablecar. As you can see it is empty because there were not enough tourists to need it this rainy October afternoon. But it gives you an idea how busy it can be here on a sunny summer day. 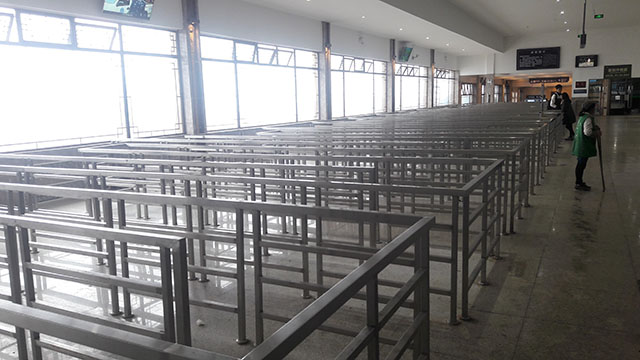 The following day I set out for Guilin. Steve cam along with me as for as Lashan just to take a look at the worlds largest Buddha carving. It is huge, you can see the scale of it compared to the people over on the left. We only looked at it from head level because the lineup and the trek down to the his toes takes a full 2 hours which we didn't want to endure. 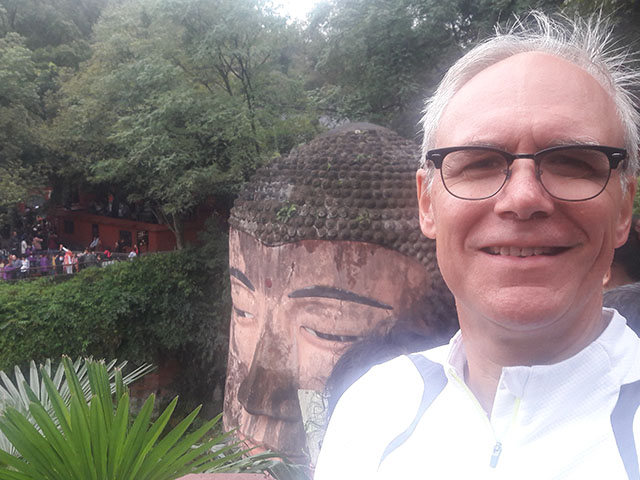 Steve and I parted ways and I continued alone in the direction of Guilin. I camped by the side of the road that night, still raining: 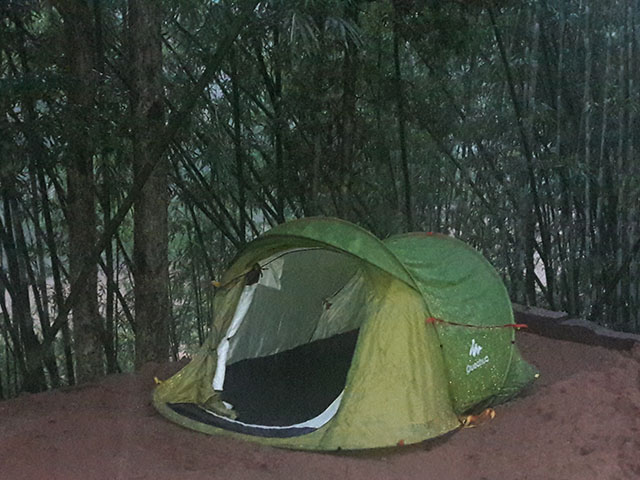 When I stopped for the night I smelled gas, sure enough my fuel tank was again leaking. In the cold and rain, I didn't want to investigate. I decided to keep going even with a dripping fuel tank. I'd have time to investigate when i got to Guilin. Well, my GPS did a recalculation and sent me off on an extremely bumpy road that seemed to never end. After one of the big bumps the rear of my motorcycle seemed a lot lower than it used to be and it regularly hit the rear tire on bumps. Also my fuel tank was not dripping anymore, it was gushing.  Whenever I stopped for gas, someone would notice the gas running down the side of the bike and would raise the alarm, yelling at me and pointing at the fuel running out. I realized that if I continued on these small bumpy roads, I would never make it another 1000 km to Guilin (which was now more than 4 days away at the speed I was going). I knew the only way I would make it would be to take the smooth, fast expressway (which in these provinces is forbidden for motorcycles). So I crashed the barrier and took the expressway, all through the day and night and arrived in Guilin in the morning. Besides the gas running down the side of my motorcycle, I could see by how the trim pieces had all separated that there was something more going on than just a leak. 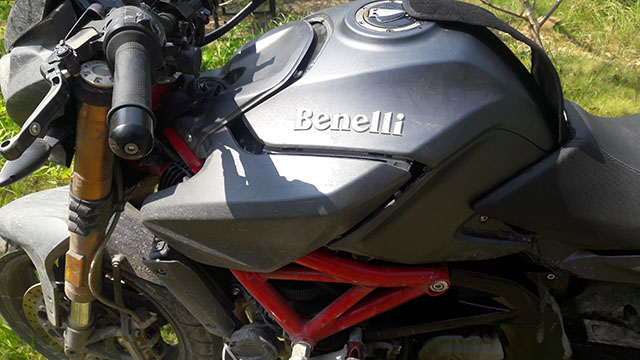 sure enough the 2 bolts holding the rear subframe to the main frame had snapped cleanly off leaving the rear frame pivoting off of its 2 lower bolts: 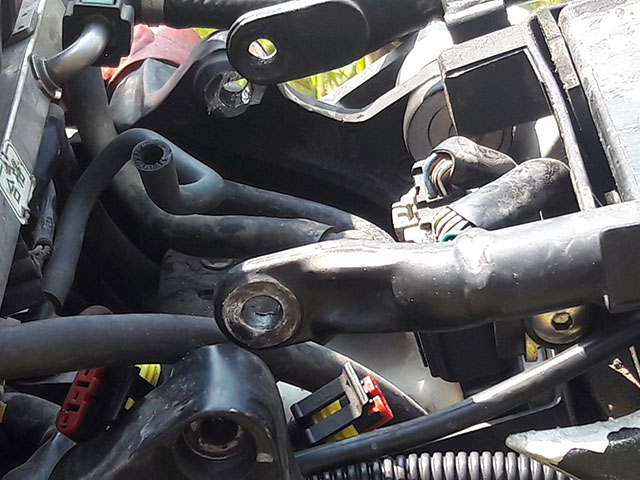 The fuel tank is mounted to the front frame and to the back frame, so when the back frame separated, it pulled on the tank, stretching it and creating leaks where the mounting bracket is welded on. It was now evident that when the first tank was leaking, one of the bolts must have already been snapped off. The the second bolt snapped after the fuel tank was replaced putting even more stress on it than before.

So, here we are again, ordering another fuel tank and now i will also be looking for new bolts to hold the frame together. In the meantime I can explore Yangshuo county of Guilin on my rental bike. Its not raining here! 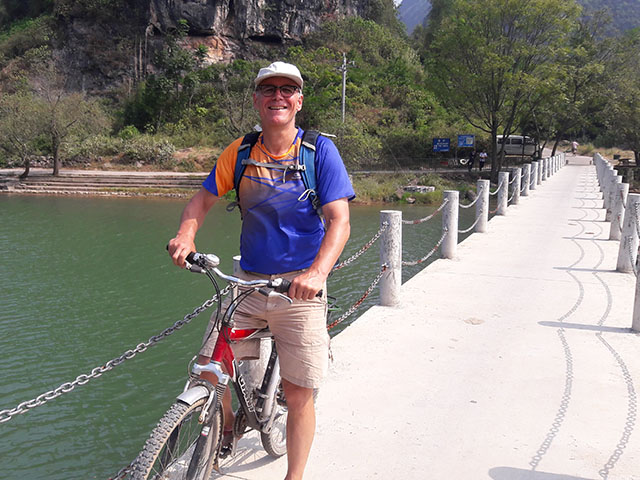 On to Part 4 of the Sacred Mountain Moto Tour >