So here I am hanging out in Yangshuo for a few days. Yangshuo county of Guilin city is most famous for the Li river winding through karst hills. Most foreigners have seen photos, paintings or drawings of this landscape and Chinese residents see it everyday on the 20 yuan note: 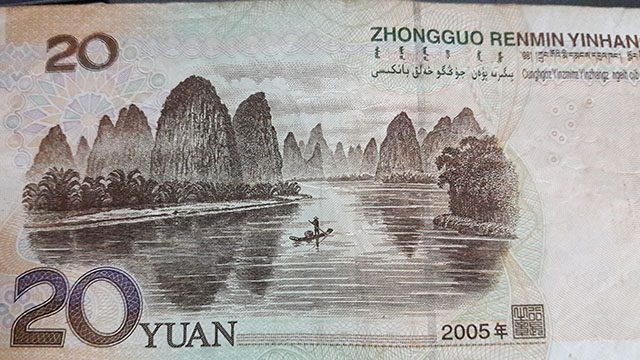 Just one or 2 bends up river from the 20 yuan note is the view from the top of Xianggong hill as photographed by my hotel host during my stay here. 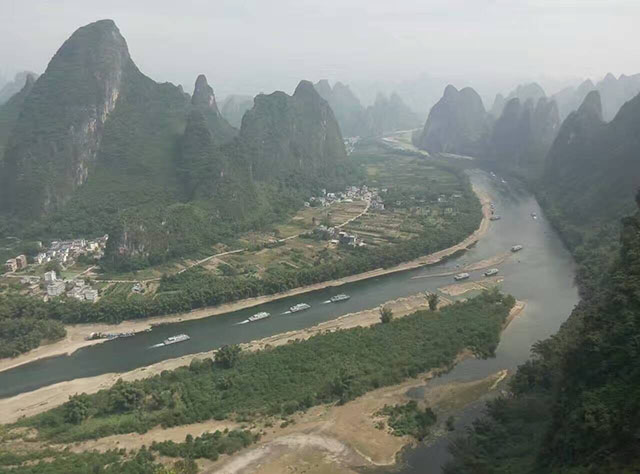 Originally I had planned on coming here to relax and do laundry before continuing on the mountain tour. I was also meeting my friend Penny who was here taking a break in between work contracts in Shenzhen. Now of course I had the additional job of motorcycle repairs while here. Fortunately I had booked a small, family owned bed and breakfast type hotel and the hosts both spoke English and were more than willing to help me find parts and otherwise support my project. First thing of course was to order the new fuel tank which was easily done with the help of Sophia doing the communication in Chinese with the on-line seller.

While waiting for the tank to arrive, Penny and I explored the area on bicycles. We were staying a bit west of Yangshuo town which meant we were on the Yulong river rather than the Li river. We visited a couple of very old bridges, here's one: 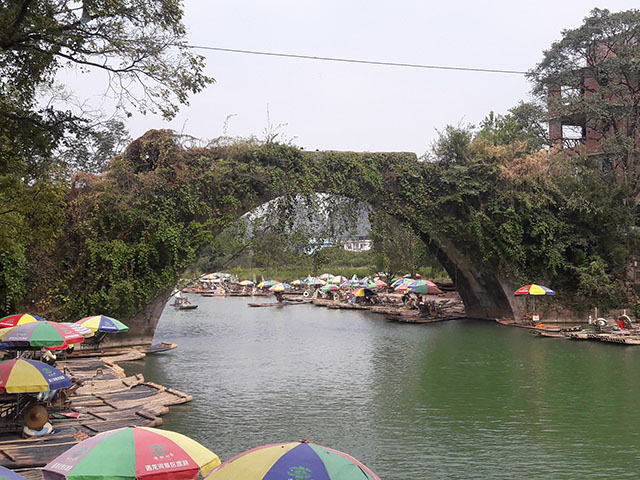 And Penny and me standing on the bridge: 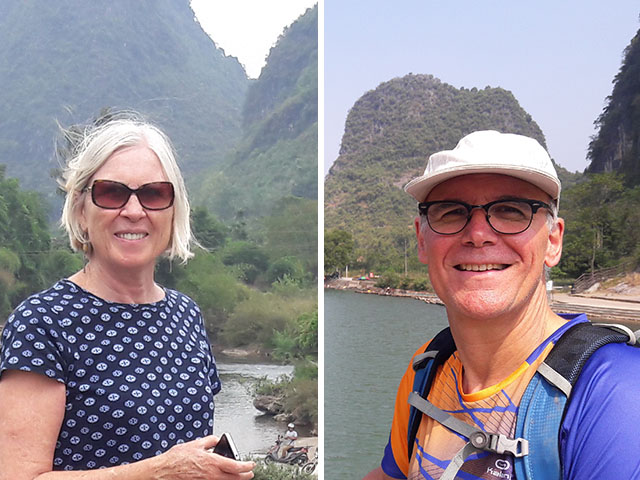 This next bridge, the Fuli bridge is even older and you can see one of the bamboo rafts that are constantly going down the river. Hmm, the tourist rafts all have chairs and umbrellas attached (like in the first bridge photo), maybe this is actually some locals going down the river ion a non-tourist trip. 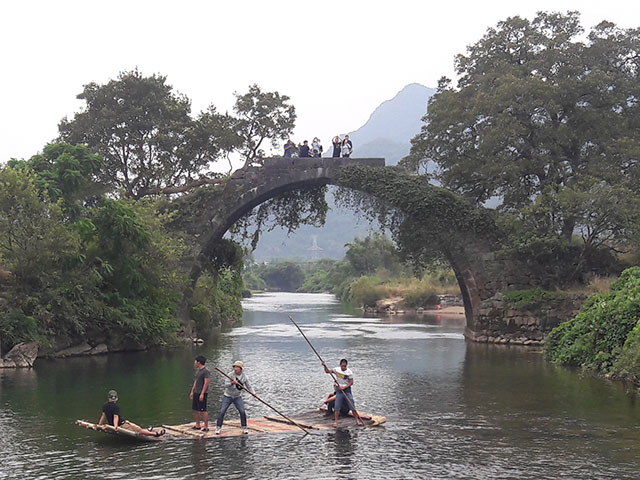 And here's the same bridge from the other side. I am just adding one more photo because I like the way the reflections on the water make a perfect circle. One day, I discovered I was missing my bank card and I realized  had left it in the ATM 2 days earlier when I withdrew some cash. This was a big problem because I wasn't sure I'd be able to get the card back especially after so long. But I definitely had to try. So off I went to town back to the bank where I was at 2 days before.  Yes, I thought it was a bank but when I got there, I realized it was not an actual bank but just a standalone ATM. 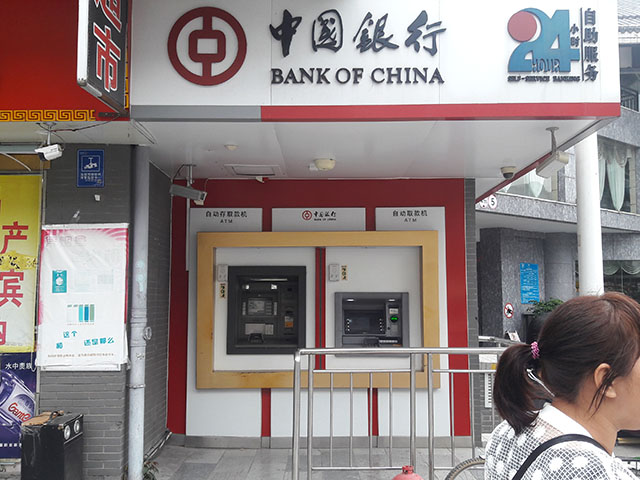 OH oh, that means I can't just go inside to ask for my card, so I set about looking for the actual bank. I could not find the Bank of China so went in to a branch of ICBC (Industrial Commercial Bank of China) which is my bank at home - the bank that issued my lost card. I thought I'd explain to them my situation and ask them to tell me where to find the Bank of China. Well it turned out to be a good thing I stopped here because they explained that they would have to do a special printout of my account details which if I take to the Bank of China they will give my my card. Of course this whole process takes time because I have to have someone on the phone who speaks Chinese and English and we pass the phone back and forth with the banking staff. So finally we get to the counter and I give the clerk my account number and passport so she can produce the special printout... It took 40 minutes with three bank tellers huddled in front of the computer to produce this printout. One of the bank tellers drew me a map of how to find the bank of China. It is not nearby. At the bank of China, it looks promising because not only did I find someone who spoke a little English, but after giving her my special printout and my passport she said "OK, I'll go and get your card now". Well, not quite, she came back saying they have the card with that account number on it but my special printout did not have my passport number printed on it so they could not release the card. Back I went to ICBC to ask for a new printout this time including my passport number. They were not able to do this but they made a combination of 2 official printouts that had all the required information on it. So back to the Bank of China I went hoping it was not closed since it was getting late in the day. Fortunately, the bank was open and they accepted the 2 documents and I got my card back.

This is often how it works in China with anything official. There are many forms to be completed, in triplicate and all officially stamped and distributed to various offices. One never really knows how long it'll take or how many other offices you will be directed to before the process is complete, I was actually fortunate that everything was successfully resolved in one afternoon without having to continue the next day. 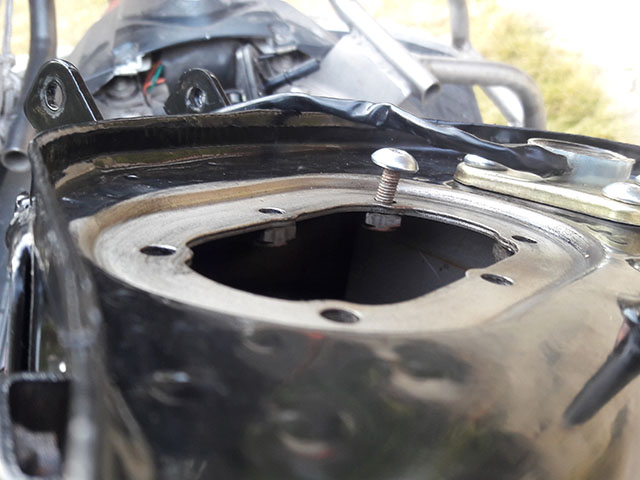 I tried everything I could think of but could not get it to seal. I could have filed the hole wider and that might have worked. But if it didn't work, the act of filling would mean I could no longer return the tank for refund. So, in the end, I just had to give up on this tank, send it back and order another. Even this process took 2 hours of Sophia on the phone with the seller. He would not believe there was anything wrong with the tank and said it is me who does not know how to install the fuel pump. Finally we convinced him - to exchange the tank that is, he still believed I was an idiot.

So, more waiting... More trips to the Youlong river... Here are some tourist rafts shooting over the mini rapids: 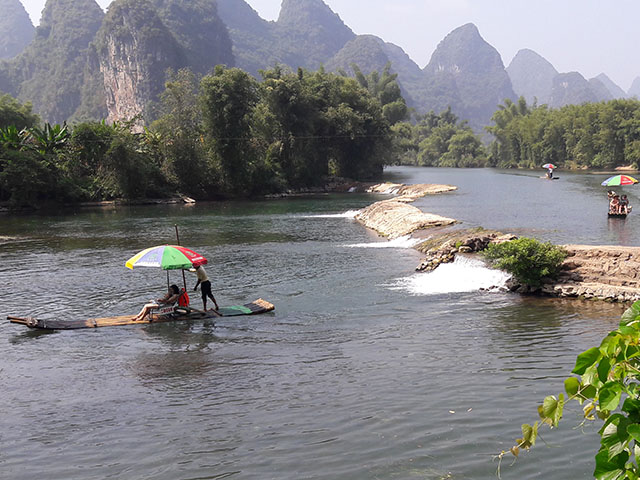 Now originally I had bought some low grade hardware store bolts locally to re-attach my frame. I figured they would hold at least long enough for me to drive into Guilin City to buy some automotive grade bolts. But after investigating where to go in the city by buy hardened steel bolts, the conclusion was they would be very difficult to find - I'd have to order them online. So I did and I fixed the frame. But this being China, just because the bolt head is stamped with the grade does not mean for sure that it is actually heat treated to that grade. So I tested a sample of my new bolts against one of my hardware store bolts. I fixed both bolts to an old machine I found in the bush and whacked them both with a hammer. The hardware store bolt folded right over and the high grade bold required harder hammer hits before it started to bend and then snapped in half. (high grade bolts withstand bending but after a point something has to give and they snap) This proves at least that my new bolts are a higher grade than the hardware store bolts. We still don't know for sure that they are the extra high grade they claim to be, but for sure they are better than the hardware store bolts: 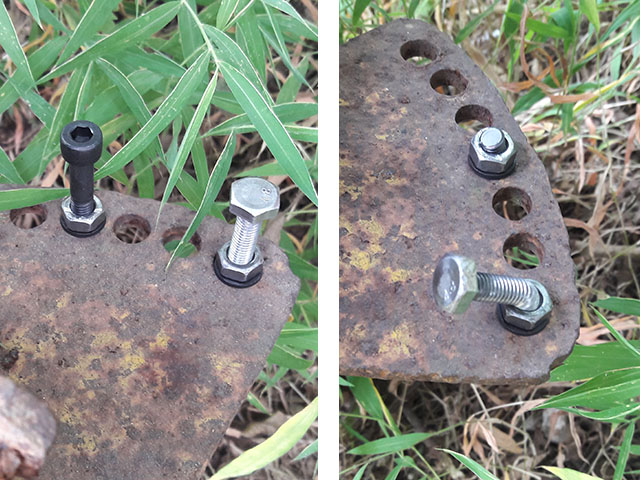 Still waiting for the replacement fuel tank... The seller was a day late in getting it ready for shipping, so I wait yet another day. To this rural location the air express shipping takes 2 full days rather than the 1-1/2 days to Chengdu for the first tank. So lots more time to go exploring. Another site withing cycling distance is "Moon Hill" so named because of the moon shaped hole in the center. It takes about 15 or 20 minutes to get to the top. This photos is from a viewpoint part way up: 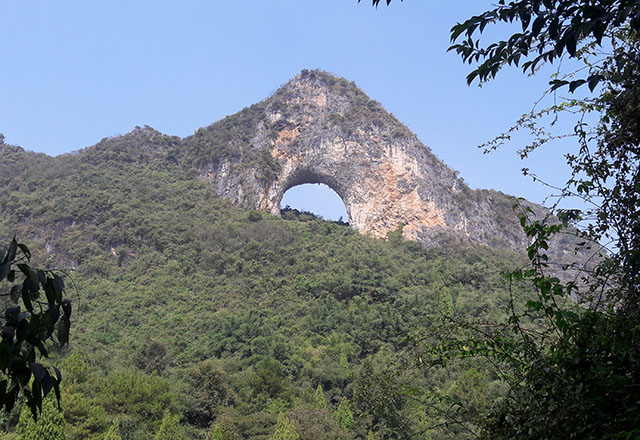 The next day after discussing my predicament on the motorcycle forum I usually use back in Canada, http://xlforum.net/vbportal/forums/forumdisplay.php?f=7, I learned that a properly designed luggage rack would not be only attached to the rear frame but would also have some sort of support to the main frame. So, I figured out a way to, temporarily at least, using tools and materials available to me, add some supporting struts from the main frame to the luggage racks: 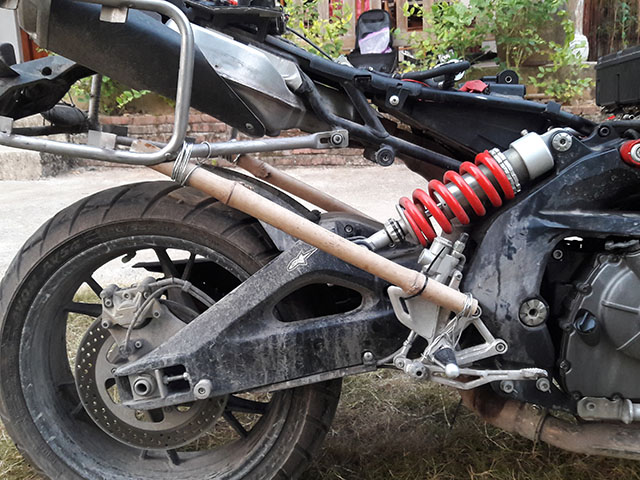 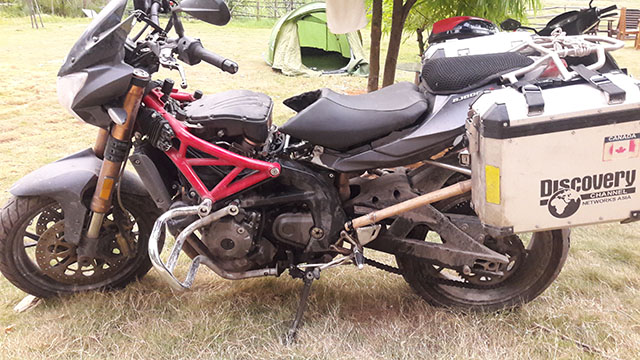 I'm sure that these will help. Even so I will try to stick to the smooth expressways for the remainder of my trip, it is a great comfort for me to know that I now have added support in case I do get stuck on another hellishly pot-holed torn-up Chinese road.

The next morning my gas tank arrived, I installed it and went to town to get my chain tightened and oil changed then made final preparations to leave the next morning. That night, my hosts invited me and the 2 other guests to join them for dinner: 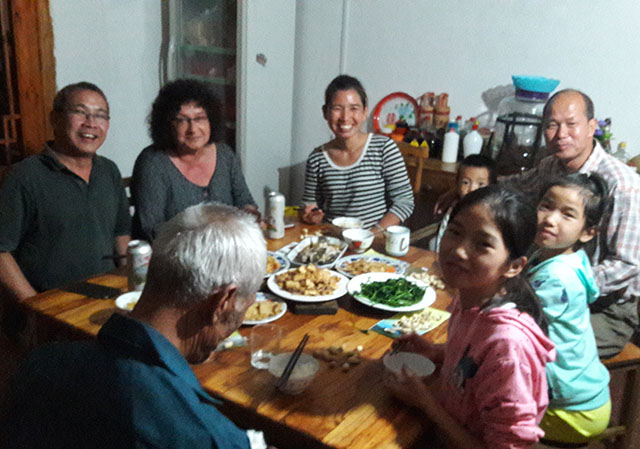 I was eight days here, waiting and relaxing and was now finally ready to head out to the next mountain...

On to Part 5 of the Sacred Mountain Moto Tour >