This week we had a chance to visit Xi'an (capital city of Shaanxi province in central China). This was our first ride on a bullet train. 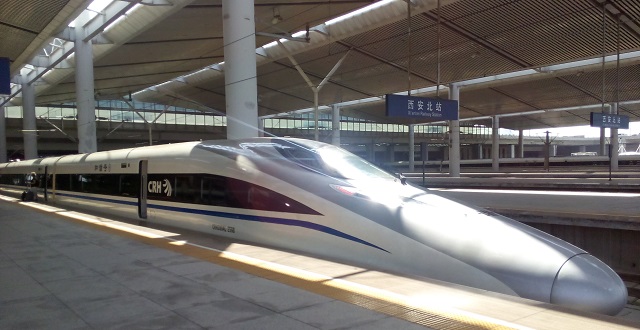 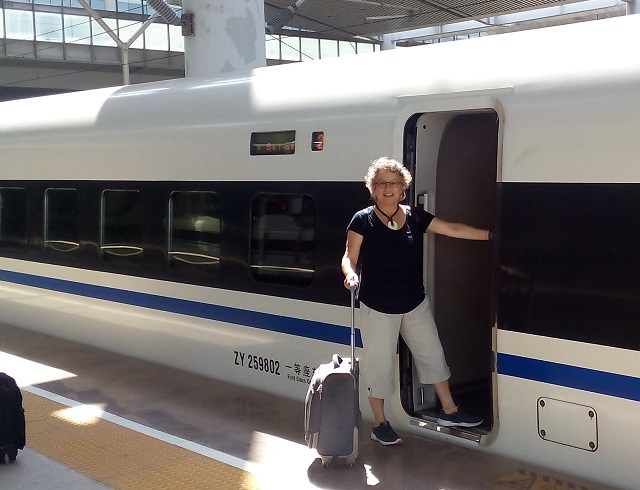 We read that Chinese bullet trains go up to 350 KM/hour, but this one only went to a maximum of 307 KM/hour. Even so It got to our destination in 4-1/2 hours. The price of a first class ticket is about the same as flying. But at least on the train, we don't have to be at the station 2 hours ahead of time in order to get through security, so the travel time is about the same. On the train, first class is not the highest. There is also a  business class that costs twice as much as first class - we did not use business class (but it was worth it to go first class).

Our hotel in Xi'an turned out to be pretty good. There was one tasteful piece of Chinese art on the wall:

Now at first we thought the 3 horizontal paper cutout figures were meant to be like that. But on closer inspection we could see the vertical glue marks where the figures were originally. This is so typical of China - many broken things don't get repaired. Like for instance seat belts in cars - as long as the car still runs why bother fixing a broken seat-belt? And when things are broken beyond being usable, we more often see them abandoned rather than repaired, sometimes replaced with new and sometimes just living without it.

We got into town early enough to explore a bit outside after dinner. Our hotel was just a block away from the Drum Tower which is quite impressive at night: 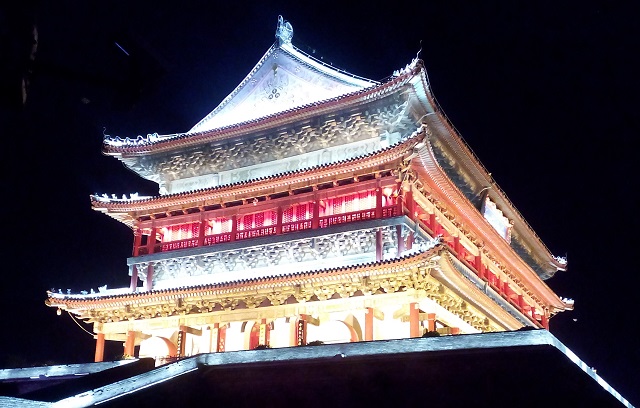 Of course there is a big fancy Drum Tower and a similarly looking Bell Tower here because Xi'an used to be the capital city of China, many dynasties ago. This part of the city, inside the inner city wall was the imperial capital, something like the forbidden city in Beijing later on. It was not for normal citizens but only for official business related to the imperial court and governance of the empire.

Nowadays of course it is for everyone and is the center of shopping and nightlife in the city. Branching off of the Drum Tower plaza is a long night market street: 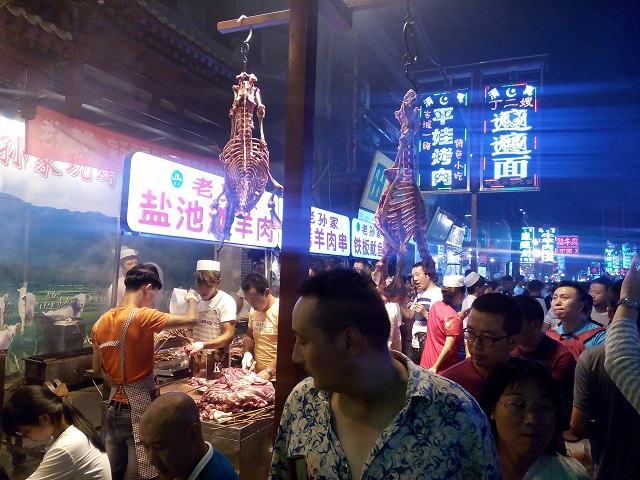 The following morning we met our friend Sean who was born in Xi'an and lived there through most of the cultural revolution. When he was young the old City wall was closed, barricaded, off limits. Now it is largely restored and a major tourist site as Xi'an is the oldest walled city in China. This wall is something like 1500 years old. Here are Carole and Sean on top, posing in front of a lookout tower: 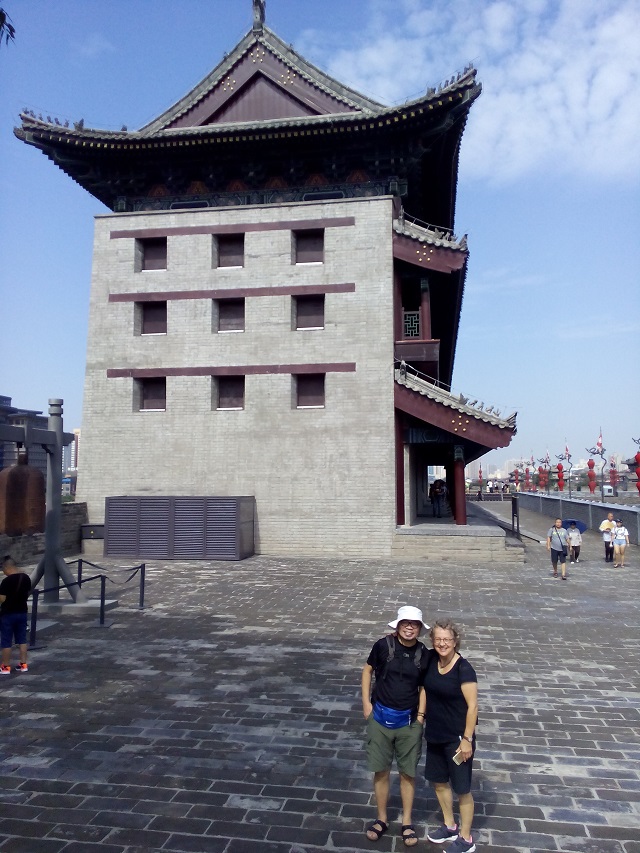 Here, from the top of the south gate, we can see the wall on the left, the moat (first line of defense completely surrounding the wall) in the centre, and the modern city on the right.

Inside the city wall the architecture is more traditional Chinese 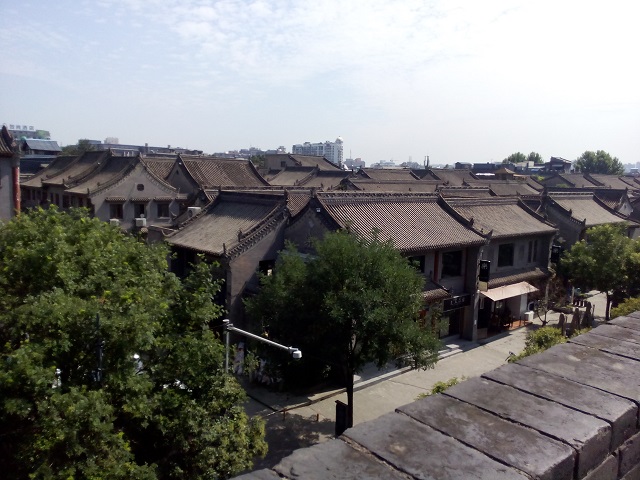 In the afternoon we went out to see the Terracotta Warriors. These guys are more than 2,000 years old and there are more than 6,000 of them, each one with a unique face. They are guarding the underground tomb of the first emperor of China. It wasn't until 1974 that this buried army was discovered when some farmers were digging a well. 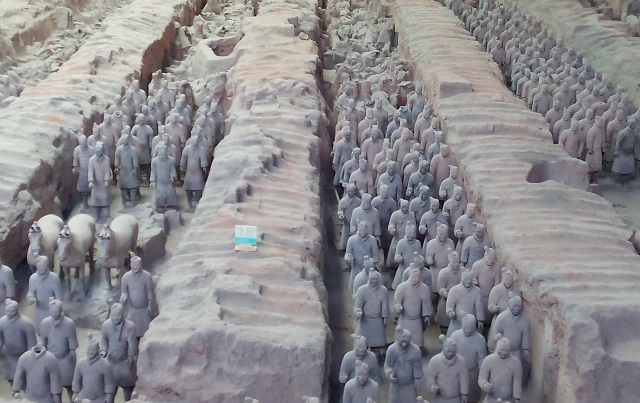 Later in the afternoon, Sean went back to the countryside where his 7 year old son is attending summer camp and we went looking for the Great Mosque of Xi'an. We were told that it may close at 6:00pm so when my attempt to head in the right direction led us into a narrow market street, Carole started to get impatient saying we have to get out of here and find the mosque before its too late. 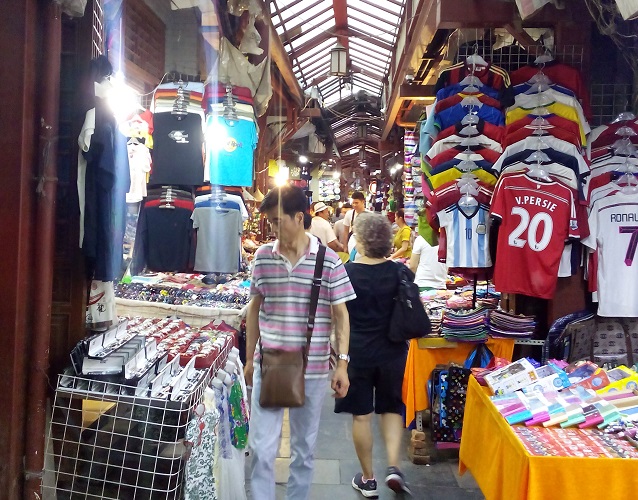 And then we turned the corner and suddenly we were in the entrance of the mosque: 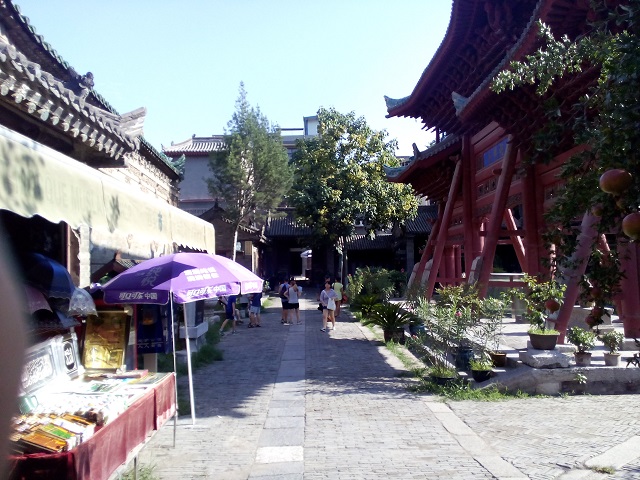 As you can see by the plan it is a series of courtyards with lovely gardens and buildings: 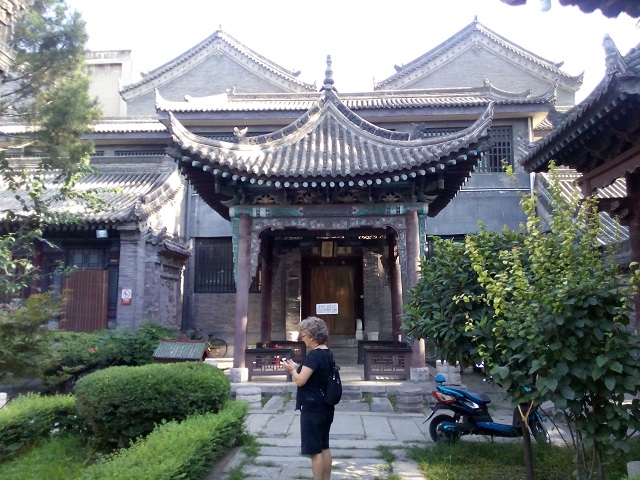 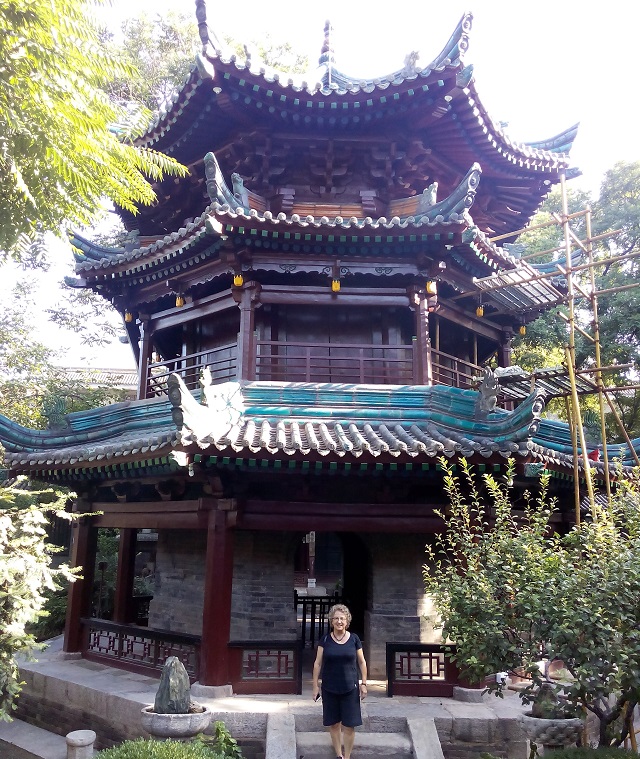 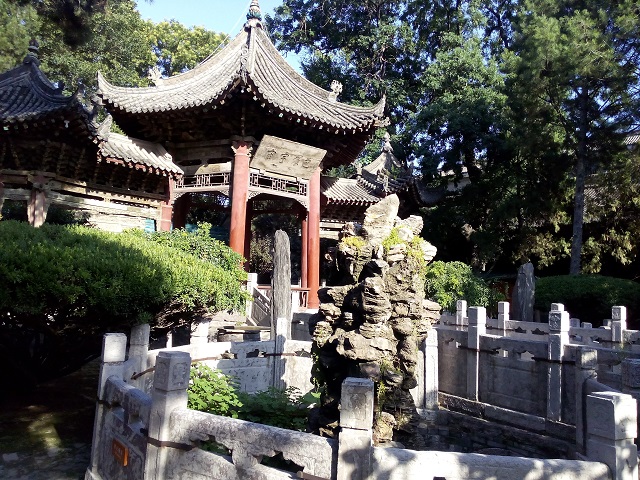 I love round doorways, I call them Hobbit doors, and there were a couple of them here: 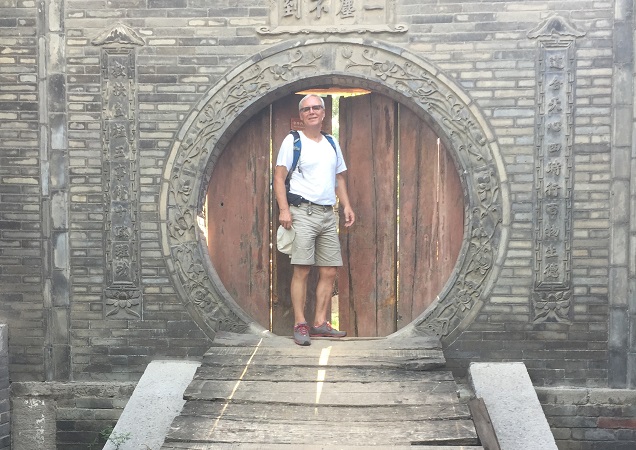 And just outside the mosque we saw this keyhole shaped doorway. It looks sort of Arabic - and that makes sense as it is in the Muslim district. 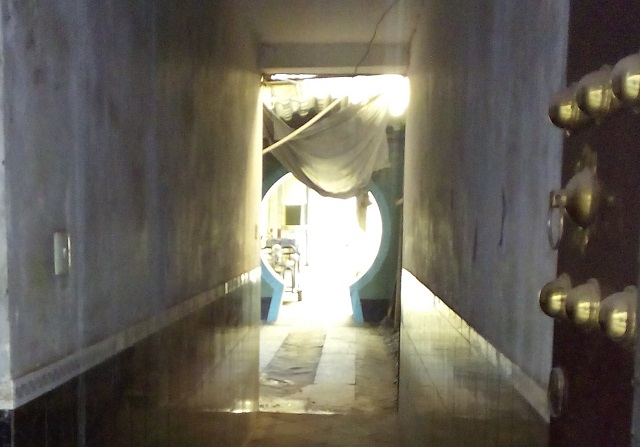 Once out of the market street leaving the mosque, we found ourselves on another food street: 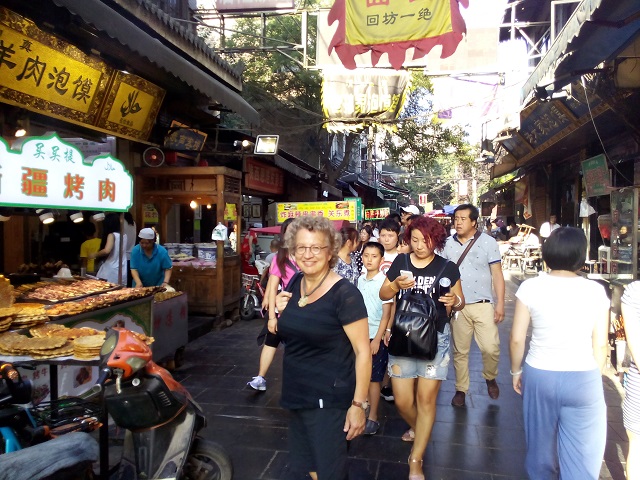 And good thing too because it was dinner time. 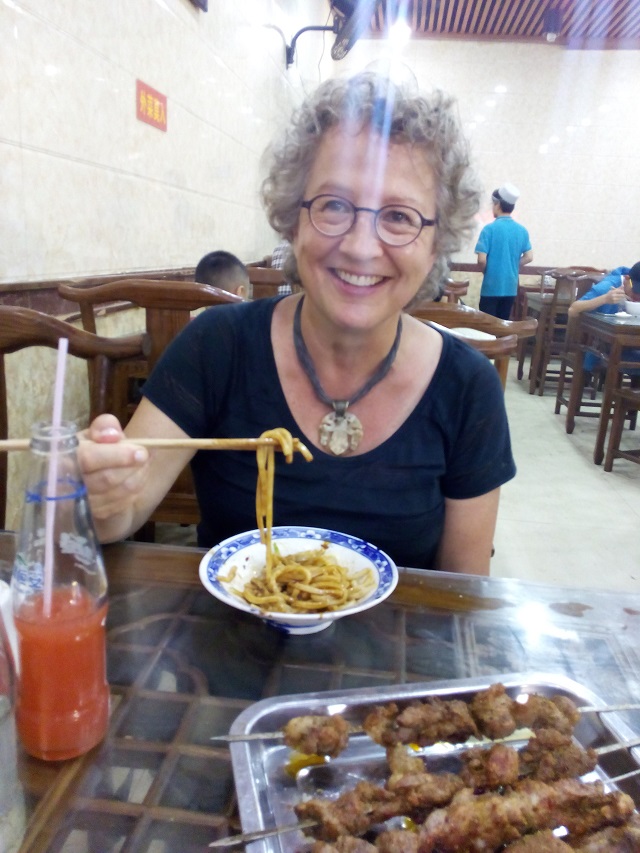 The next day, Sean took us to the Wild Goose Pagoda. On the way he showed us the apartment building he grew up in and the university where his dad taught.  When he lived there, it was all farmers' fields - now the city expands to his old area and beyond. Close to his old neighbourhood is the Wild Goose Pagoda which we visited. The pagoda itself was being restored and hidden behind scaffolding so not worthy of a photo. Here is the front gate: 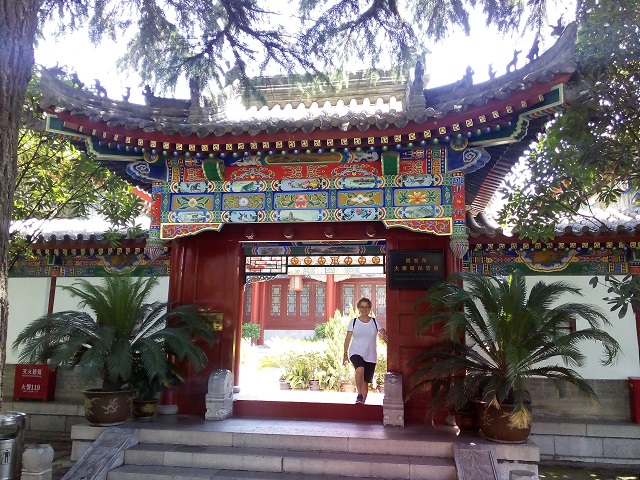 Similar to the Great Mosque of yesterday (and similar to most Chinese temples actually) this was another series of courtyards and gardens. Some nice rock gardens included. Here we are rubbing the statue for good luck: 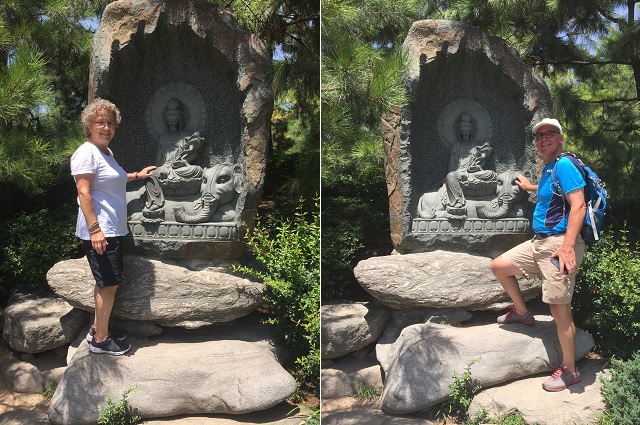 Now there is a famous 16 century Chinese novel that we had been made aware of, it is titled "Journey to the West" in Chinese. There is a popular English translation of this story titled "Monkey". There was a 2008 movie staring Jet Li and Jackie Chan ("The Forbidden Kingdom") that is loosely based on this story and recently there have 2 animated movies named "Monkey King" that are also based on this story. Well in the back of the Wild Goose Pagoda is the school of Master Xuanzang and the description looked to us to be a lot like "Journey to the West": 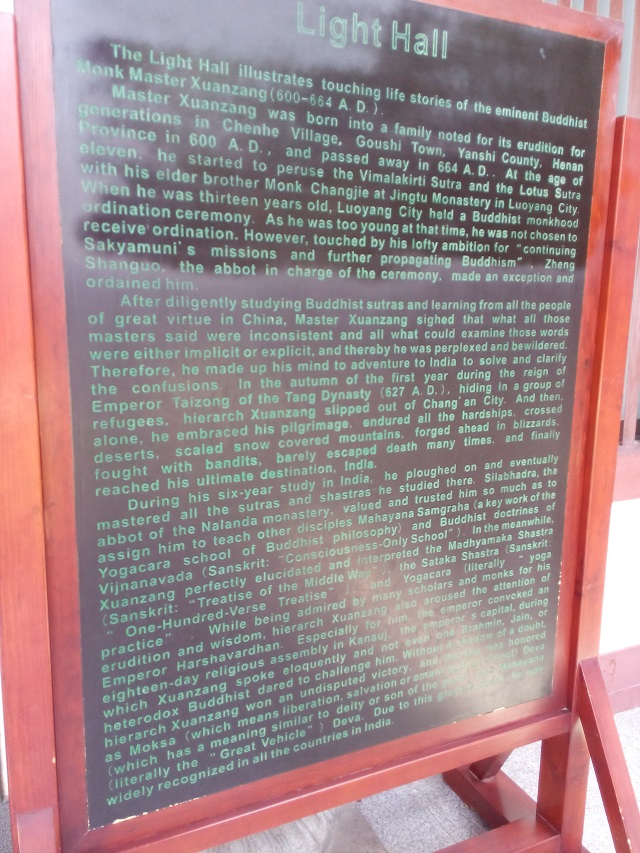 We asked Sean and sure enough, this monk is indeed the one in "Journey to the West".

After the pagoda visit, we were going to visit a park but it was not the kind of park we imagined, so we went to the Provincial Museum. I am usually not that keen on museums, but this museum was air-conditioned and it was 38 degrees outside, so in we went. It was actually somewhat interesting, but it was also crowded with hundreds of other people escaping the heat and the air-conditioning could barely keep up. So eventually we made our way back to our hotel.

After a cool down and dinner we went out the west city gate and walked along the park walk bordering the moat. We were not alone. People all over China come out in the evenings to cool off (because their non air-conditioned apartments are still hot when it cools off outside). A popular evening activity is plaza dancing. Plazas, town squares, and any suitable flat open surface soon become full of people line dancing to music from portable public address systems. Usually its just dancing, but sometimes it is a bit fancier with long dragon tails: 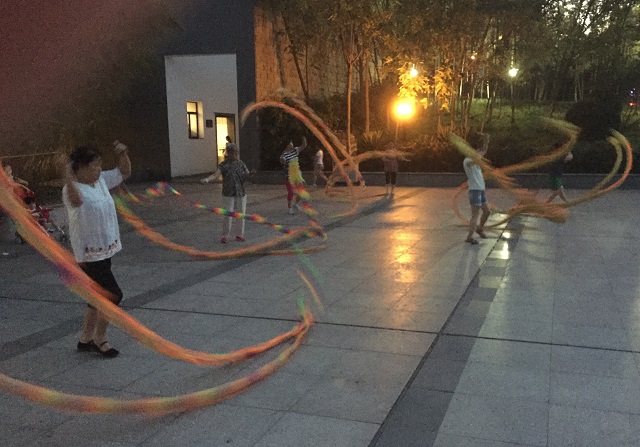 We even found this troupe dancing in front of the city wall with flags and umbrellas, and a live band (including huge Chinese drums).  Carole was entranced and moved in close for several shots: 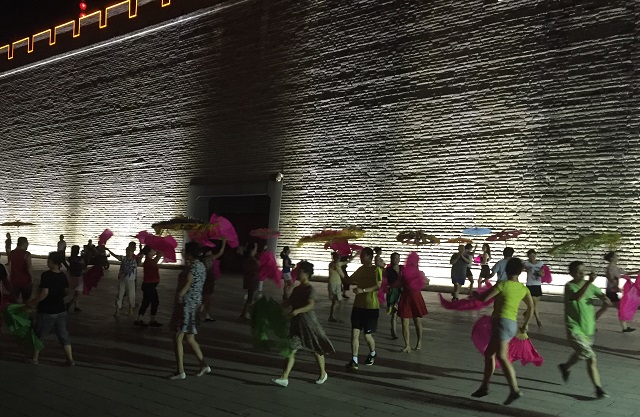 And that's pretty much the end of our trip to Xi'an. We had one more little adventure though leaving town. We took the subway to the train station and Carole's ticket got eaten by the automated gate so she had to wait for the train station guard to open up the ticket checker to retrieve her ticket so she could exit. She was surprised at how friendly and patient everyone seemed to be. 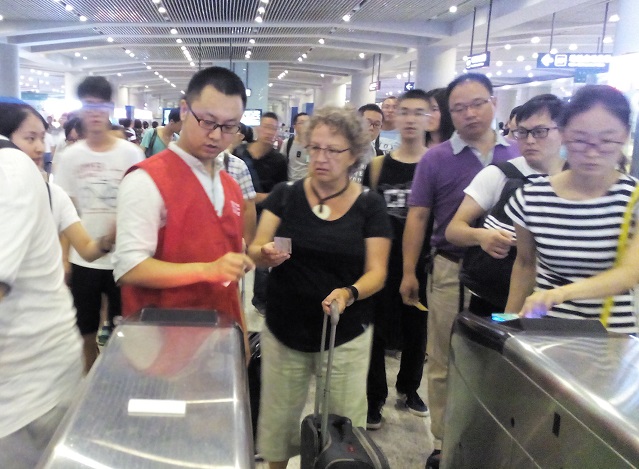 After that it was just a few more hours of bullet train, more subway, slow train to Yanqing (during which I had time to write this blog entry), and finally taxi home.