As many of you know, Carole and I made a little trip back to Canada last month. We took care of dentist visits etc and then, while Carole was leading a Come Alive workshop on Gabriola Island, I went to Kitimat to visit family.

One day we went "drifting" down the river. This is floating down the river on a boat with no motor, putting down anchor at spots for fishing, then drifting on further down until we get to the beaching spot where we have a car ready to take us back to the truck and trailer so we can drive back to pick up the boat - it involves a lot of driving. 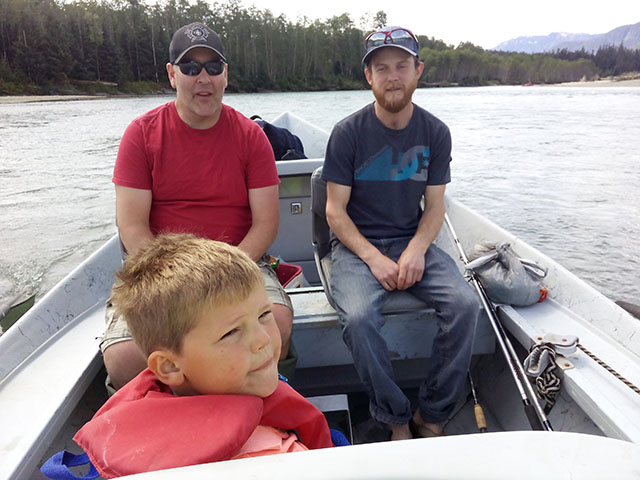 Here we are, Donny, Mitch and Jacob getting ready for fishing while I take a break from rowing to take a picture. The rowing isn't hard work, its just enough to keep us pointed in the right direction and away from log jams. We spent about 4 hours on the water. There were fish jumping all around us and nibbling at our bait - but we didn't catch any. We all got nice sunburns though.

After all the driving back and forth to get the boat back home we had a family barbecue.  After dinner the kids wore us out jumping on the trampoline. Here's Kathy taking her turn after I was worn out: 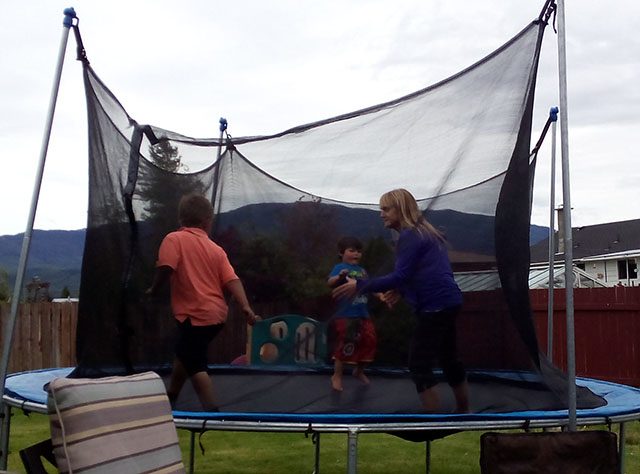 And then it was time to head back to Namaimo so Carole and I could pack to return to China. So how does this Canada visit lead to bike repairs? Well,  I stumbled upon a blog about a father and son going around the world on motorcycles  and the review they did on the tires that took them 25,000 km all the way through Europe and Asia http://earth-roamers.blogspot.hk/2015/11/avon-trailrider-after-25000-km.html. So, remembering that my rear tire is almost worn out, I checked the online sources to see if I could get the Avon Trailrider tyre in China - apparently not. So I picked one up in Canada to bring back with our luggage: 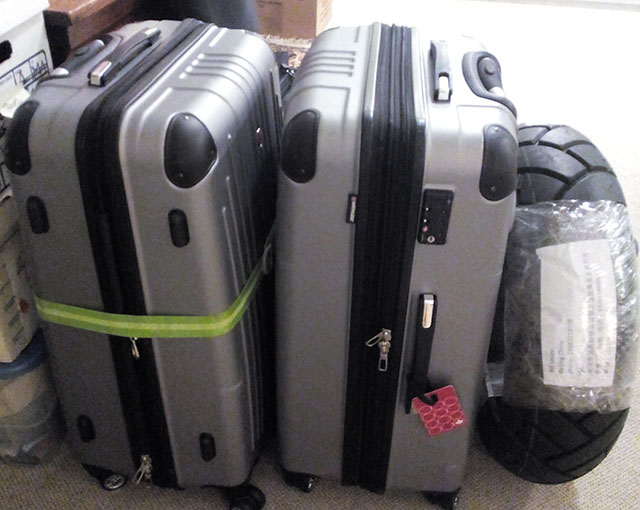 One last thing, at the Vancouver airport, while browsing the souvenir shops waiting for our plane, I picked up a little package of Canadian flag stickers - the reason to be revealed a bit later. Here they are (well most of them as I have already peeled off a couple): 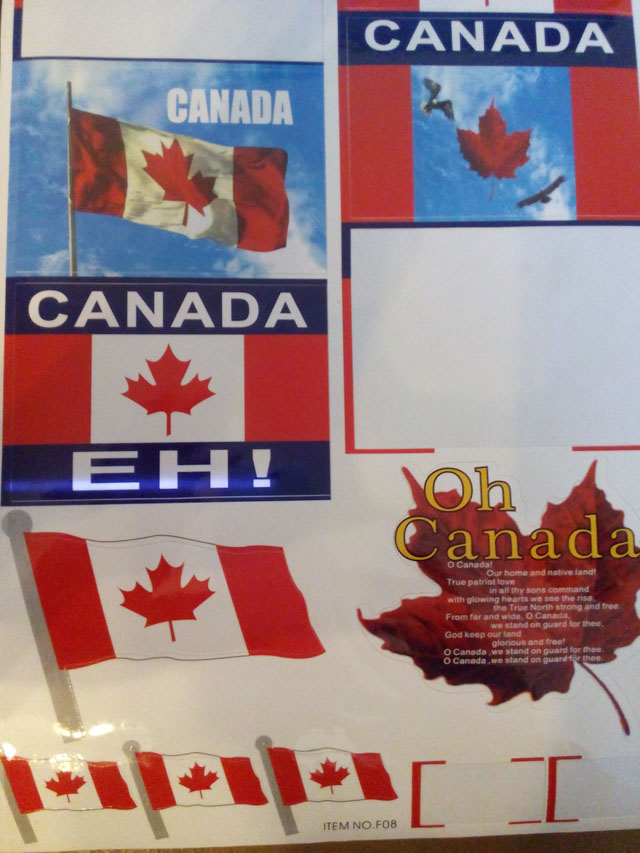 Then, arriving back home in Jackson Hole, I found that  my bike was leaking oil from the front forks and would not start because the battery was dead. I asked around if anyone had jumper cables, no one did, not even the professional drivers. Strange! I don't know what people do here when they break down - you are not allowed to buy fuel in a portable container - not even in a container approved for fuel, and no one carries jumper cables. In the end I bought a new $25 battery and had it delivered to our house. That allowed me to drive to the motorcycle repair shop to get the tire and the fork seals replaced. Here I go: 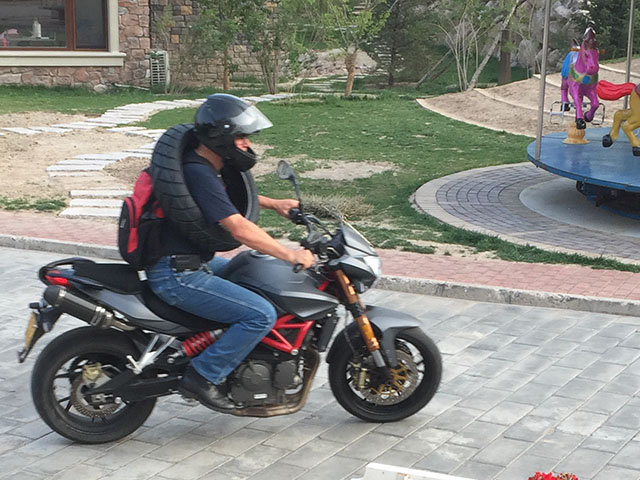 It was about 7:00 in the evening when I got to the repair shop in town. I had a note all prepared which asked them to change the tire and replace the fork seals and notify me when it is ready to pickup. I expected at least 2 days because they'd have to order the fork seals. The guy didn't want to leave it till tomorrow though he started removing the rear wheel right away. I pointed again at the note saying there are 2 jobs and to notify me when done. He seemed to insist he start on it right away. I didn't want to walk away while he was in the middle of it, so I watched and waited: 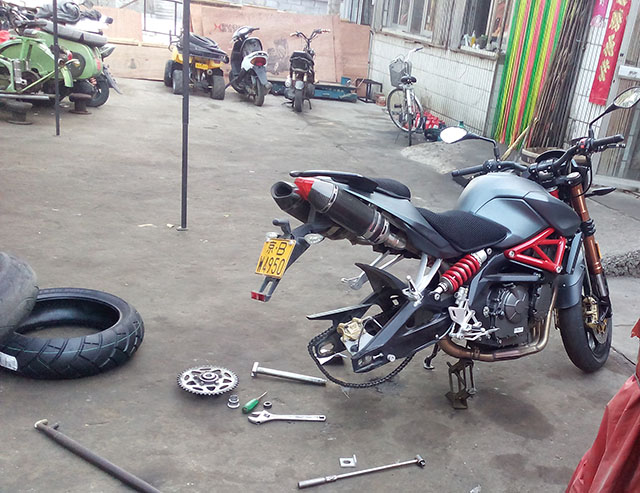 I guess they don't have a tire machine so one of the guys jumped on a scooter that was half taken apart, put the wheel and tire on his lap and drove off. He returned 15 minutes later with the new tire on my wheel. Finally we got it worked out that they didn't have the fork seals in stock so it would take a couple of more days before the bike was ready. So it seemed like they were now letting me leave without the bike.

Meanwhile, while we were away in Canada, my luggage rack and panniers had arrived. The story is that I had ordered the set more than a month ago and they arrived defective, the panniers did not fit the brackets properly - so I sent them back for repair/replacement. I was excited to install and test them, but alas, only one side had been fixed, the other side still did not fit. Rather than fight with the vendor and send it back again, this time I took it to a welding shop in town. They cut it, beat it with a hammer, tested the fit, then welded it back up perfectly, all for $20. 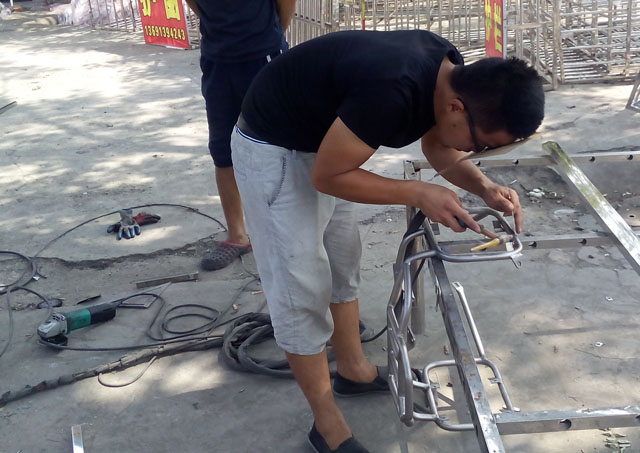 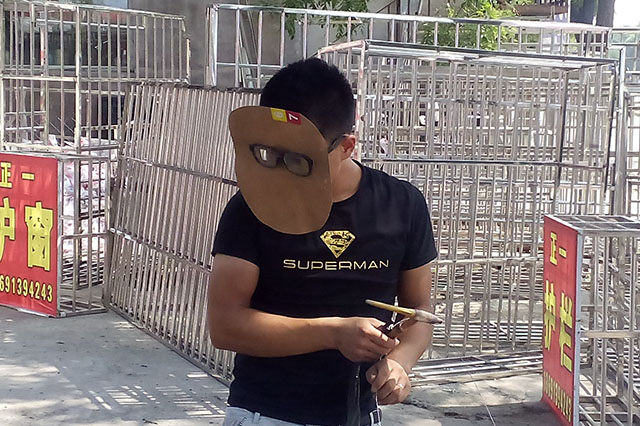 And how about the human vice. I can't imagine why they don't have a bench vice to hold on to parts, or even a clamp to clamp it to their welding table. But here they are, 2 guys holding the part with pliers while the third guy grinds and shapes it - all without safety glasses of course. 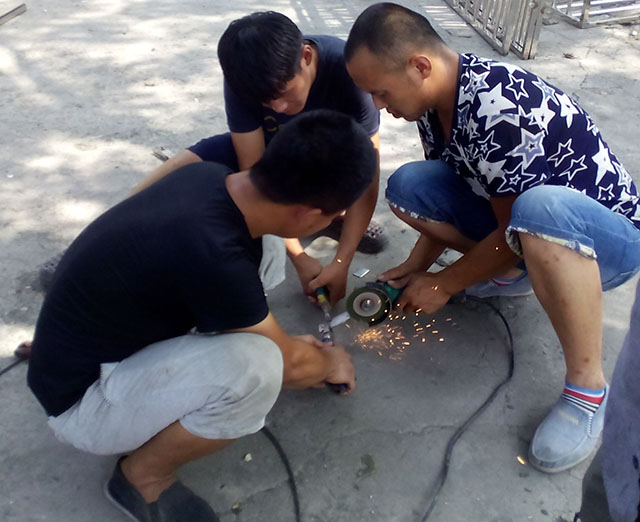 And finally, once the bike is back from the repair shop, I fit the pannier rack and mounted the panniers. These are a popular Chinese knockoff of the type of pannier BMW uses on their bikes. They are pretty solid actually, I like them. 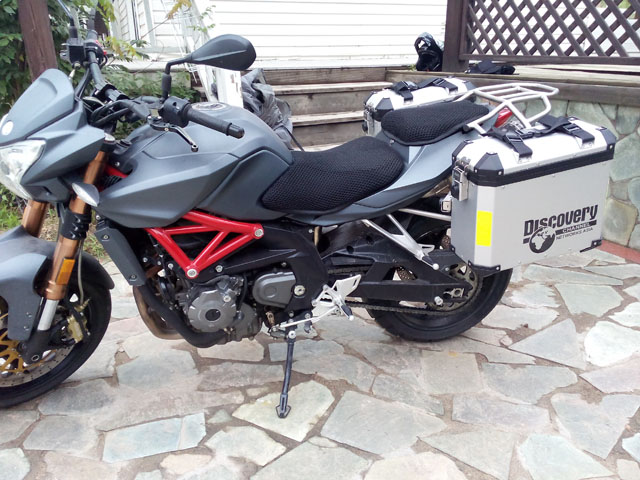 Of course people usually put stickers all over these panniers to show where they have been. And that is why I picked up the Canadian flag stickers at the airport in Vancouver. here they are: 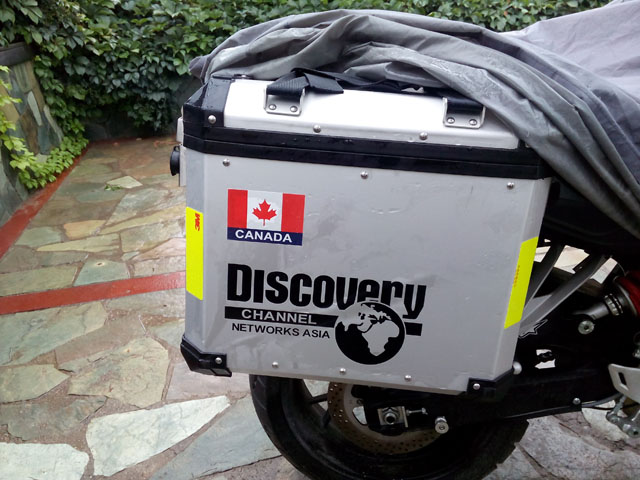 You can see that I had to pull back the rain cover to take this picture. Although the rain has let up today, the last 3 days have been the heaviest rain in norther China in 60 years causing some devastating floods. In Beijing city alone, 25 people died from drowning and many more from other flood related causes. Here is a taste: http://shanghaiist.com/2016/07/20/north_china_floods.php.