Driving (a motorcycle) in China

I've had an idea of a theme of another blog post, but haven't gotten around to it. Now though, I have a new topic to talk about. Since now I have a motorcycle to get around on, I'll talk about driving in China.

Some background: Before coming to China one of the things I researched was "driving in China" and I found this video:

The next shocker for me was when I was studying for my Chinese Driver license and discovered that they have virtually the same traffic laws here as in N. America and Europe - you just don't see anyone following the laws. So after being used to this type of driving for so long, we are now shocked by different behaviours

For instance, one day, while out for a walk we saw something so unbelievable we both commented on it. Yes it is true, we both saw it - the car used his turn signal before making a turn. But the most unbelievable thing we have seen here was last week, in a taxi. The drivers mobile phone rang, he pulled over to the side of the road and came to a complete stop before answering the phone.

So, here are my new wheels: 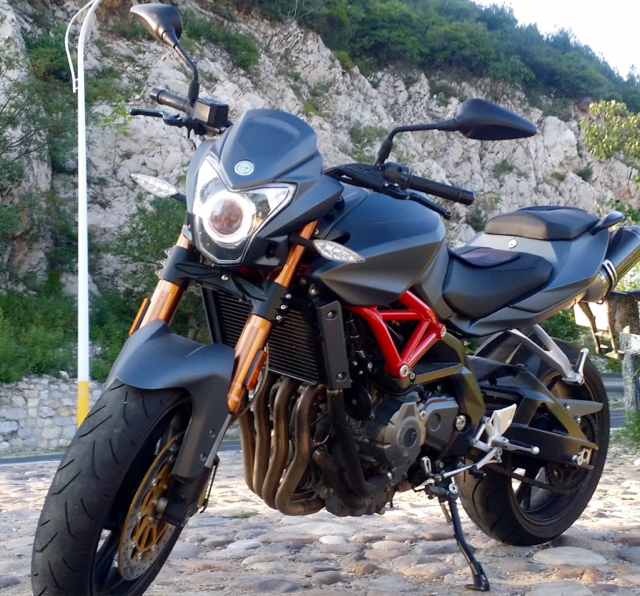 Its a 600cc Benelli. This is one of only 6 or 7 Chinese models of motorcycle that are bigger than 250 CC. In fact at least 98% of the motorbikes on the road in China are less than 150 cc. I know Benelli sounds more Italian than Chinese - well it is long standing Italian motorcycle company (since 1911) that was recently purchased by a Chinese company. So now they are manufactured in China, mostly for export but there is a version for the domestic Chinese market as well - which means it can be registered to be legally driven in China.

Now of course most motorcycle owners in China don't seem to worry about "legally registering" their bikes. They just drive around with no license plates. But if anything happens that involves the police, unregistered motorcycles are confiscated - never to be returned, plus possible fines, jail, lawsuits, and who knows what else. So I got a legally registered bike.

Carole and I went into Beijing Wednesday last week to check it out and then make the deal. Here we are exchanging a wad of cash for a booklet and a key: 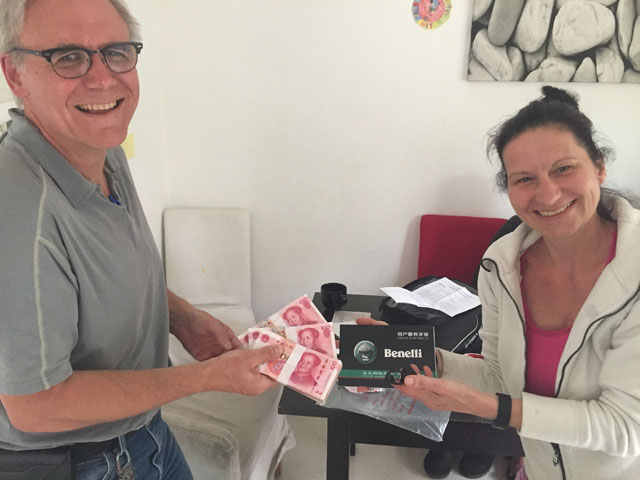 Then, back home in Jackson Hole we leaned that motorcycles aren't allowed except for property owners. This is just one example of motorcycle discrimination in China. There are many places motorbikes are not allowed at all. In fact many cities (like Shanghai, Shenzhen, etc) don't allow bikes at all, also many expressways don't allow bikes (and those that do limit the top speed to 80 km/hour while cars are limited to 130 km/h). So, as with most rules in China, there is a way to make individual adjustments, so I got a pass to allow my bike into the compound where we live: 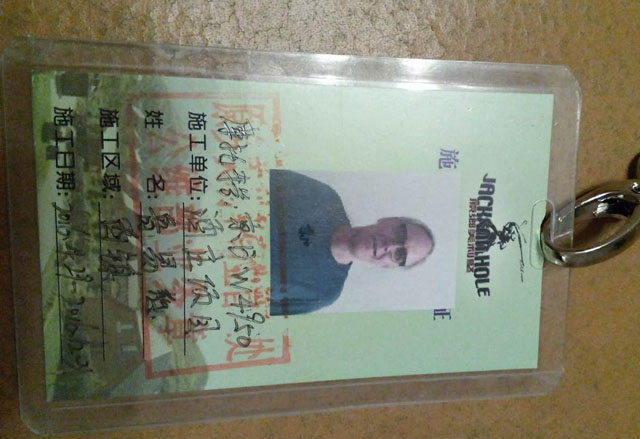 Then I went back to Beijing on the weekend to bring it home. That was a mistake as it was the May 1 (labour day) weekend and the expressways were bumper to bumper traffic jams. So I did a bit of weaving through traffic and finally made it home in twice the time it should take. Here we are: 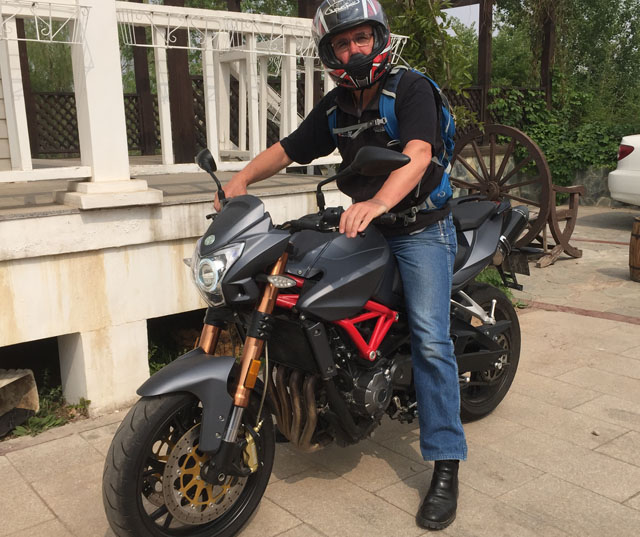 But only one helmet. I made 2 trips in to Yanqing looking for a helmet store and only found it the next day on trip #3. Now we have 2 so Carole can come along for a ride: 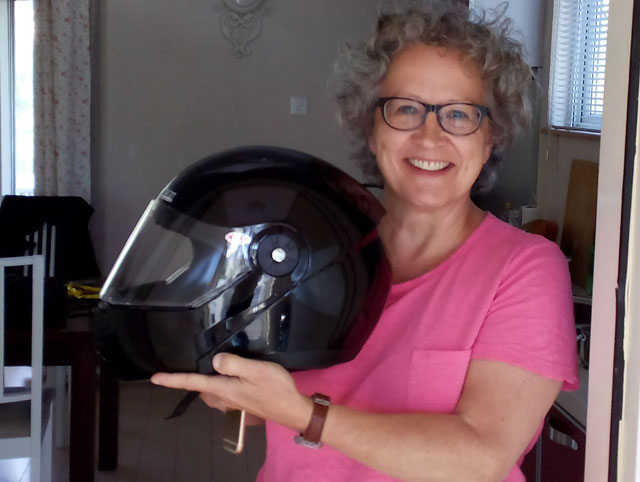 But maybe we can use even more safety gear than a helmet. Now it It turns out the (previous) owner of the bike is selling it because he is returning to Germany (He actually lives about 30 KM from Cousin Ingrid). He was  back in Germany at the time he placed the add which is why I am exchanging cash with his wife above. Anyway his wife told him I don't have any biking gear here so he offered to bring some back for me from Germany since there it is much cheaper (and more reliable quality). So I picked out some gear on the website link he gave me and now I have more safety equipment than I have ever used before. This is a suit that is not only waterproof and has skid protection but also knee pads, elbow and shoulder pads and even can be installed with hip pads and back board if I wished. I'll sell the bike when we leave but I'll keep the suit to bring back to Canada: 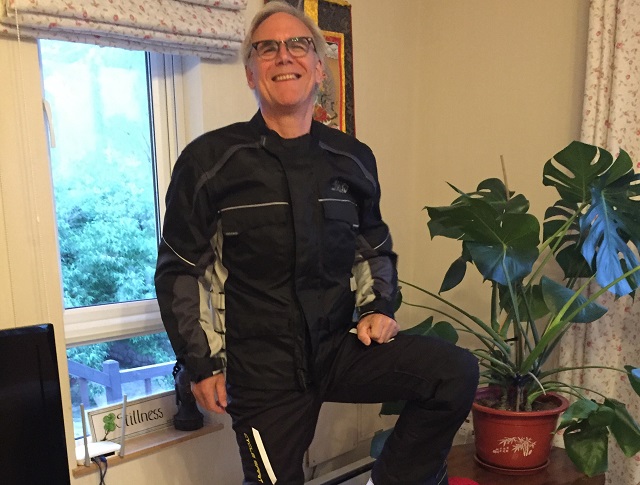 All those trips to town looking for a helmet burned more fuel than I expected and I forgot to check the gas gauge. So the next time in town I ran out of gas. Big mistake. Another symptom of the motorcycle discrimination here is that one cannot buy fuel in a gas can to bring back to your empty motorcycle. No way at all. I knew we have to show paper work here in order to buy gas but I never imagined that, even with my legal paperwork, I would not be allowed to buy fuel if the motorbike is not with me. Finally the taxi driver who took me to the gas station and waited for me had a solution - he would take me back to the bike and then rope tow me back here to the gas station. That of course is completely illegal (but as with anything illegal it only matters if you have an accident or something). Here we are untying the rope after the tow to the gas station: 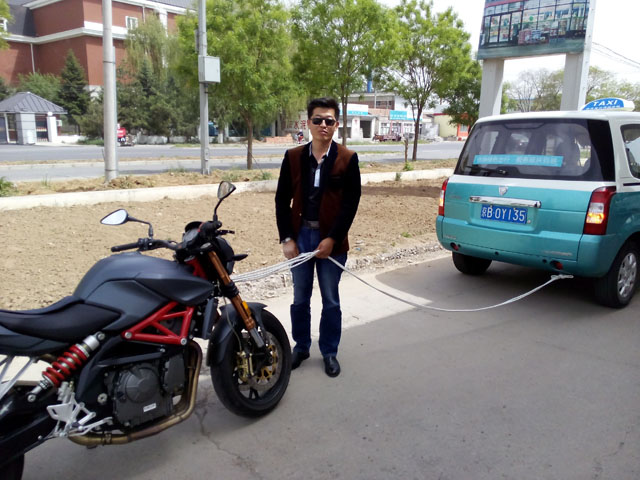 So, did you get a good look at the video linked at the beginning of this blog entry? Now imagine sitting on a motorcycle being towed behind a taxi.
Posted by Unknown at 5:25 PM