Cambodia, and back to Saigon

We are now hanging out in Nanaimo BC, Canada doing odds and ends that need doing in Canada. So, I have time to update the blog with our Cambodia trip.

It was a quick trip, Van arranged a 4 day bus tour for us. We have never taken a bus tour before, nor even an organized tourist tour of any sort. We always imagined them as too restrictive a schedule to suit ourselves. This time, seeing as we wanted to see Cambodia with Van and did not have much time available, it would be a good occasion to try out an organized tour. It was indeed a tight schedule and very long days - they filled every moment with activities and tourist attractions. Also it was a lot of driving and for Carole who gets motion sick - that meant 4 days of being constantly drugged up on Gravol (travel sickness pills).  And it was all worth it. 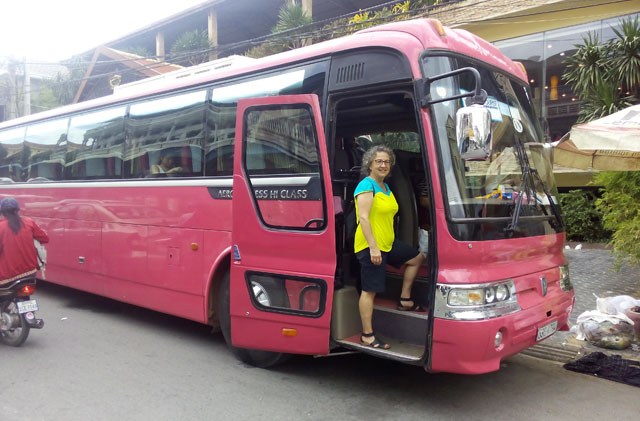 Typical houses and scenery along the way during the 11 hour bus trip: 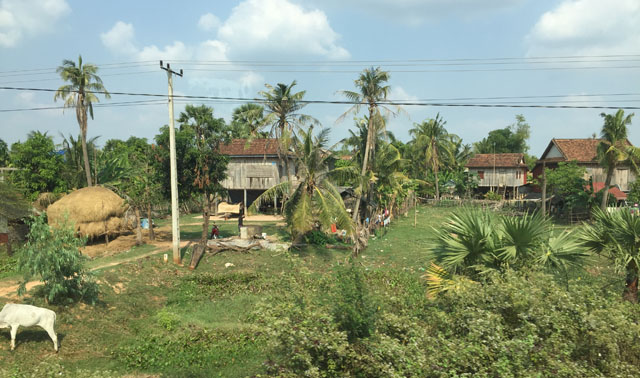 Here is me and Van at the famous Angkor Wat temple in Siem Reap. 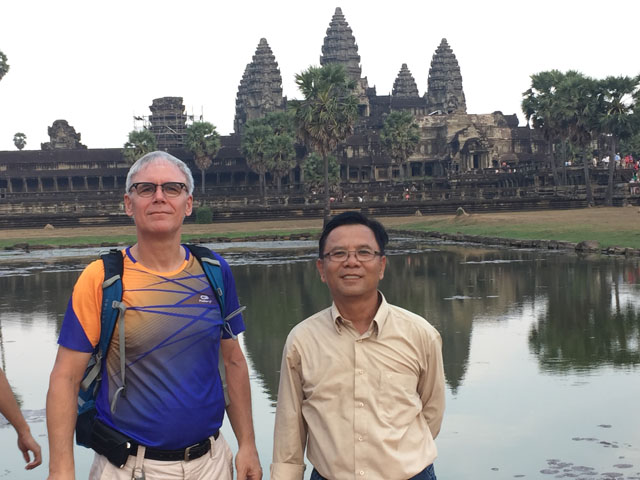 Of course Angkor Wat is just one site in a huge area of ruins of the ancient city of Angkor. So we, like the thousands of other tourists there during those 2 days, went from site to site according to the bus tour schedule.

Carole and I posing at another ruin site: 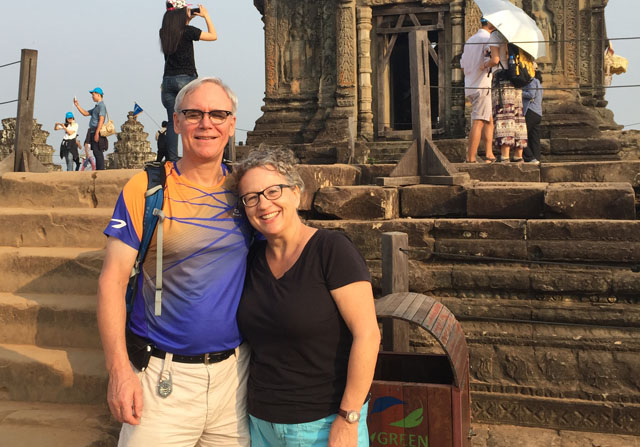 Most of the ruins have been overgrown by jungle over hundreds of years and only recently cleared for restoration. The trees have been left at some of the the locations, in part because the damage that would be done by their removal. It makes for some interesting mixture of architecture and tree roots: 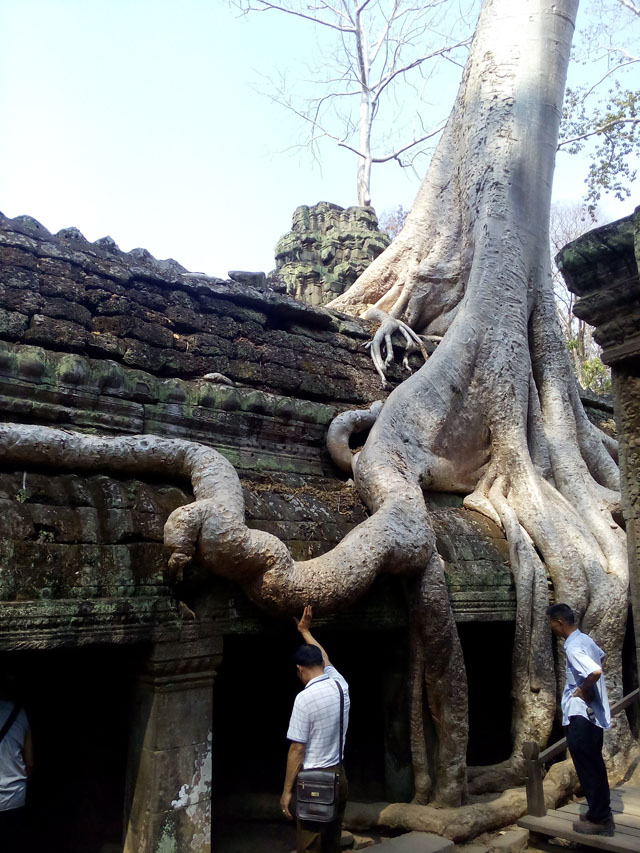 There was a big crowd of people hovering around and photographing another tree that was made famous by being in a Tomb Raider movie. I didn't try waiting in line to see it up close. No lineup to see the above tree.

I mentioned there were thousands of people. According to Wikipedia over 2 million visitors per day at Angkor Wat, that means an average 5.5 thousand per day. For example, here is one of the little crowds. This is a site that has hundreds of carved smiling Buddha faces. For some reason this is the one face that is most popular to photograph so its a little more crowded than other faces: Of course we have more photos of our 2 days in and around Siem Reap, but there are many better photos to be found on the internet so I won't add even more here. Also on the internet (Wikipedia for instance), is lots of information on the modern history of Cambodia during the Vietnam war and the Khmer Rouge under Pol Pot. We heard little bits about it when we were kids growing up in Canada, but were quite shocked to now read about the full scope of the horror that country endured. Now, things have settled down somewhat. Cambodia is now a constitutional monarchy with a so called "democratic" government (in reality it is more of a dictatorship run by an ex Khmer Rouge Prime Minister). The King is quite visible on the street in the capital Phnon Penh: 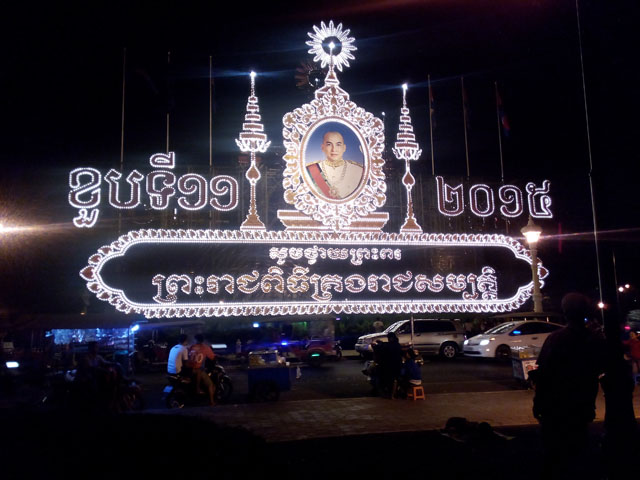 Also in Phnom Penh, here's something I haven't seen before. The food court in the middle of the market place. You buy your food at one of the stalls around the outside edge then find a place to sit and eat on the rugs spread out all over the center. 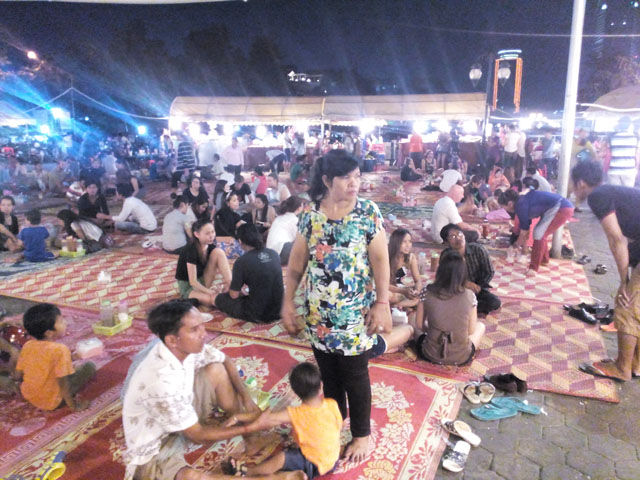 Also during our evening walk we came upon this. Not sure what it was but there was a long lineup of people waiting to burn incense at the alter. 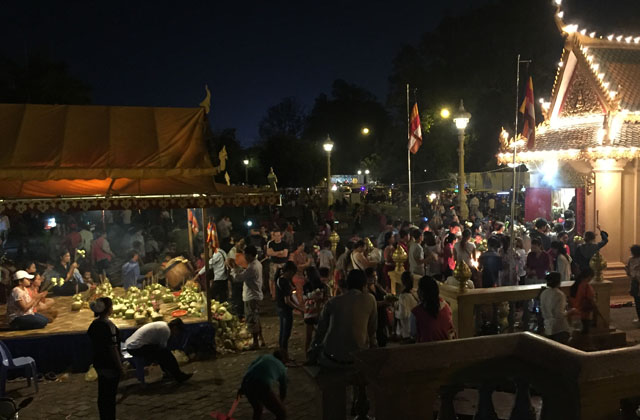 Also, on the left on the stage area you can just see the edge of a musical group playing pinpeat music. We grew to like this style of music that we first heard in Vietnam close to Van's house. There was a Cambodian funeral at at a house nearby which means this type of music was playing for 3 days straight - including all night long. Here is an example of the this music pulled from youtube: 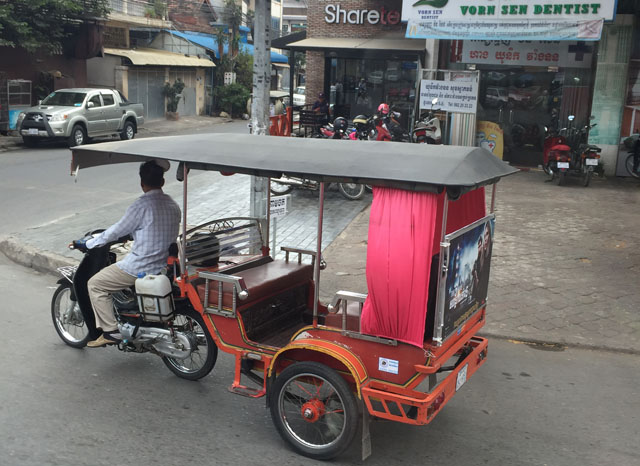 Finally, our last day, on the bus trip back to Vietnam, shortly before the Vietnam border, we pulled up to a rest area that had a market selling all kinds of fried spiders, grasshoppers and other insects. The tour guide said he'd buy the spider if anyone dared to eat it. In a bus of 30 people (mostly Vietnamese) I was the only one to try.  It was crunchy.  Carole was squeamish but still willing to capture the moment: 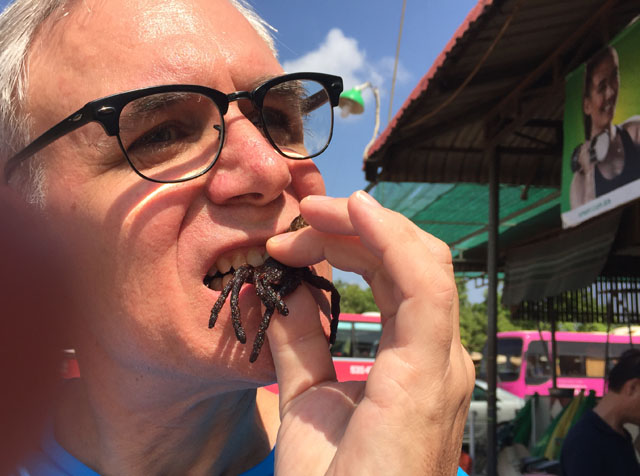 Well, then we were back in Saigon (Ho Chi Minh City) for 2 days waiting for our plane back to China and then on to Canada. Compared to the bus tour we did a much more relaxed pace of visiting attractions. We found a couple of sites that were not on the main tourist route so we were the only visitors. Here's one: 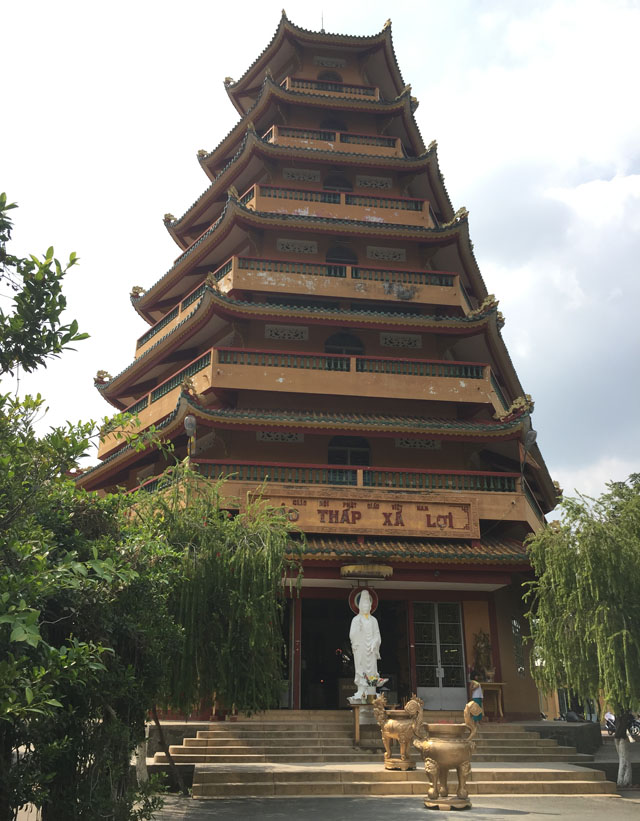 and the view from the top: 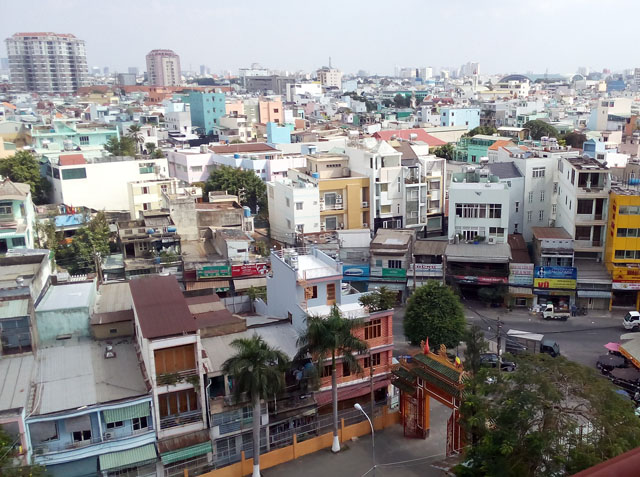 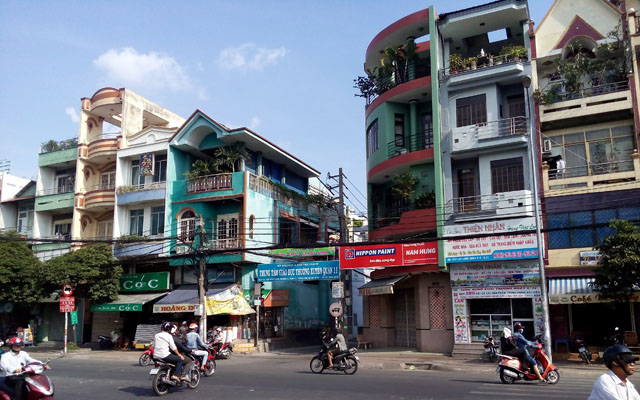 And there is also a modern downtown. One of the distinctive buildings in the Saigon skyline is this one with a helicopter pad jutting out the side: 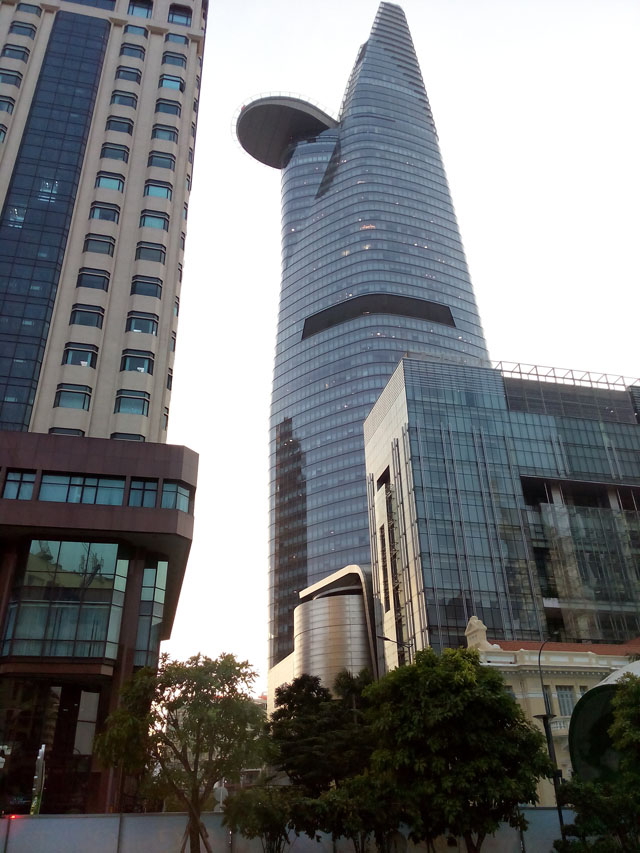 To end this post, we decided to copy the habit Chinese tourists "posing" for photos. So here is Carole in front of a small plant sculpture by the riverside boardwalk with a bad photoshopping job of Bill's pose superimposed on it : 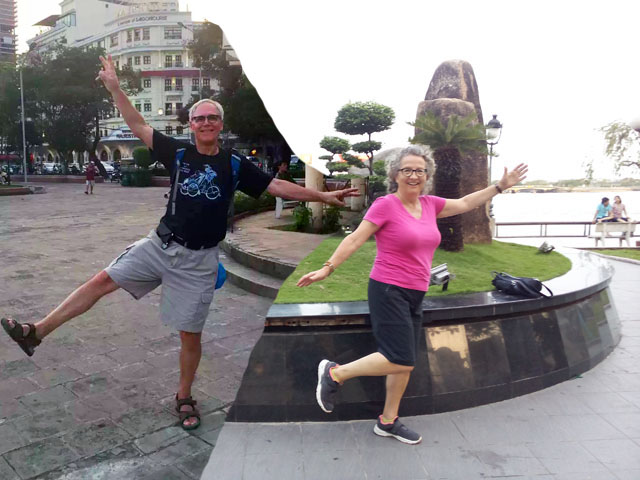