Its been over a month since my last post, so I'm doing a bit of catching up here. This is our trip to Inner Mongolia which was actually about a month ago.

It was kind of a rush trip as we only had a 2 day weekend but we didn't think we'd have another chance to go before the weather gets colder so we headed off to the train station in Huailai which is 45 minutes in the opposite direction to Yanqing (our closest small city where we catch the train to Beijing).

So we were off to what English maps name "Hohhot" (Chinese pronunciation = Hūhéhàotè - not at all resembling Hohhot), the capital of Inner Mongolia. Inner Mongolia is the province of China which borders the country of Mongolia (called "Outer Mongolia" in China). Of course China has a long history of at times being ruled by the Mongols and at other times ruling over the Mongols. About a hundred years ago Outer Mongolia gained independence from China while Inner Mongolia eventually became a province under the new Peoples Republic after World War II

So here I am on the train to Hūhéhàotè: 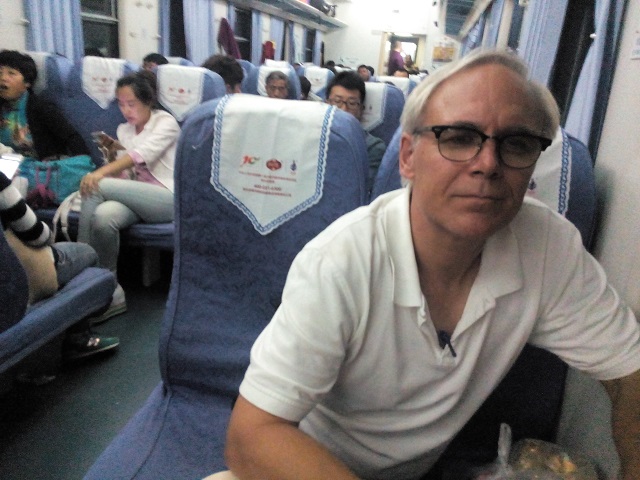 It was a long uncomfortable 6 hour ride as we were too late getting tickets so all that was available was whats called "Hard seats". They are actually padded but it is the lowest class available above "standing room". So it is full, seats are reserved and if there are any empty seats the standing room people grab them right away. When we got on the train there was a "standing room" ticket holder in our seat and he moved out without complaint as this is they way it works - they use an empty seat until a ticket holder claims it. But across from us sharing the 4 seat grouping with us, was someone who had already consumed a whole bottle of whiskey (it was only noon) and was sprawled leaning on the shared table and leaving only 1/2 seat for the person next to him to squeeze into.

Eventually we arrived in Hohhot in time for dinner and a look around the night market which covers many city blocks. Next morning, as our hotel was just on the edge of the Muslim part of town, we began our site-seeing by looking for the Grand Mosque which was supposed to be about a 10 minute walk. We got sidetracked by mooncake stands like at this Muslim bakery: 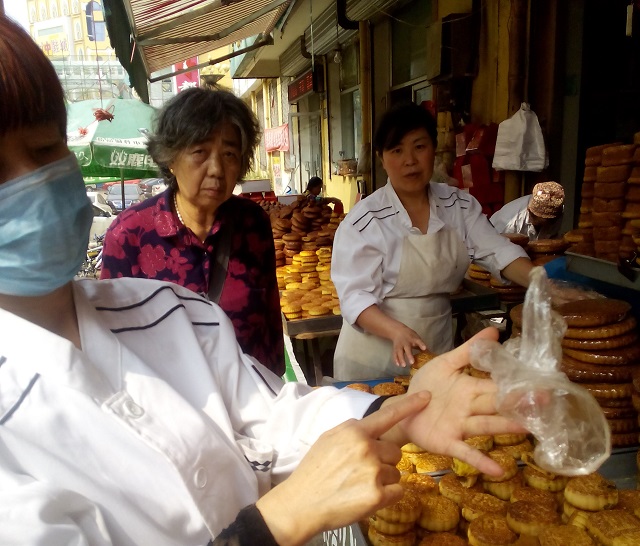 So of course we bought a box full of mooncakes to take back to Jackson hole as a gift to the staff. This was the weekend before Mid Autumn festival where everyone eats and gives gifts of mooncakes. Every area of China makes different types of mooncakes so this would be a treat for the staff to get Mongolian mooncakes. Besides it is almost expected to bring gifts of mooncakes at this time of year.

So, mooncakes deposited back at the hotel we are back on the road to the mosque - we think. On the way we pass a restaurant that has a live garburator (a sheep) tied up out front: 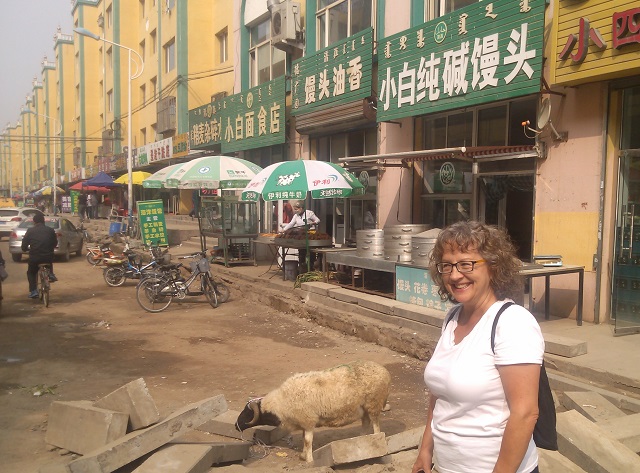 After that, down the street we see something that looks like a mosque dome: 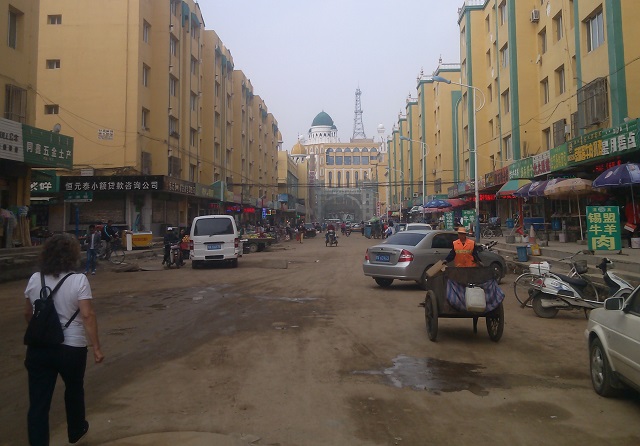 But in fact the street doesn't lead us to the mosque so we approach from a different angle and again see domed roofs that could be mosques: 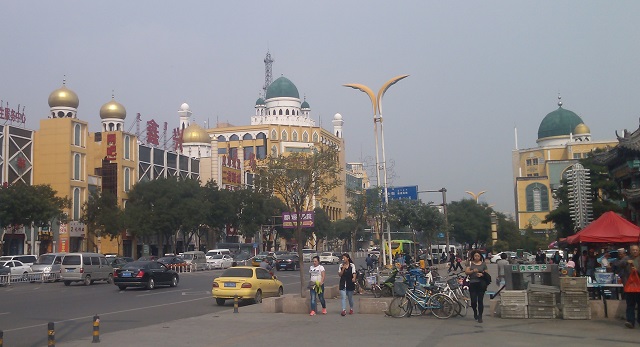 It turns out that under those domed roofs were shopping malls. OK, so there is another domed roof that we thought maybe was the mosque and in front of it was Aladdin's lamp that Carole rubbed to see if a genie would pop out: 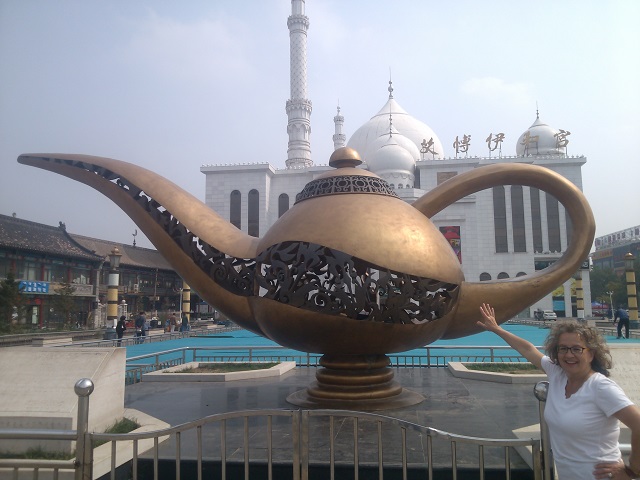 But no, it turned out that under that roof was an Arabic hotel. By the way that hotel roof  was colourful at night: 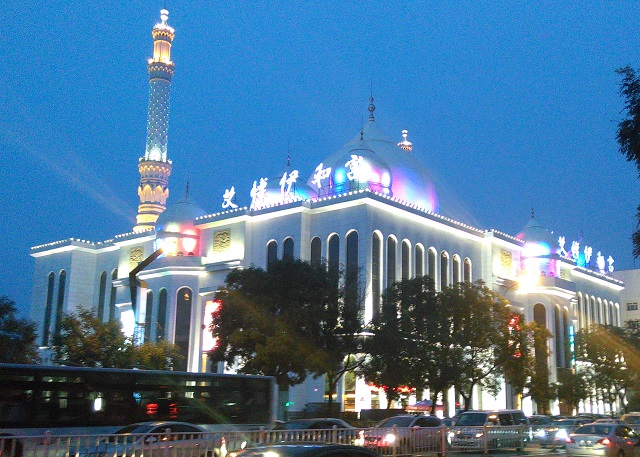 We never did find the mosque. At least we didn't think so. The google map we were using was a bit off, and that's not surprising because the whole of China is offset by about a hundred meters in Google maps. We did find something that was called "Muslim Dasi" in Google map and we are now suspecting it was actually the mosque. At any rate, here it is, it is the only area in the whole of the Muslim quarter that is old Chinese architecture. Here's the entrance: 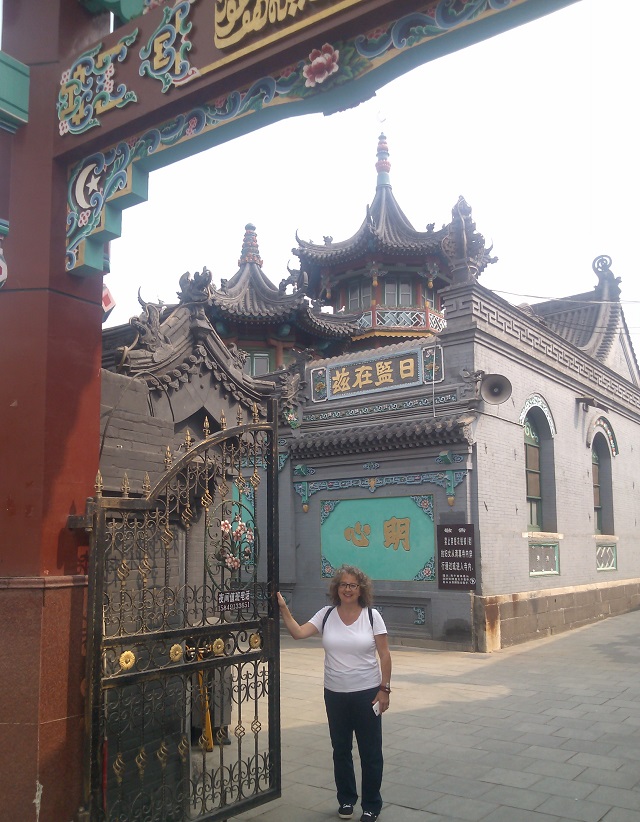 and inside, Chinese architecture but Arabic script on the signs: 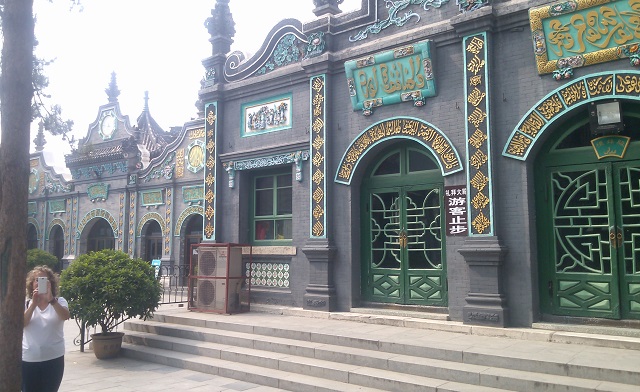 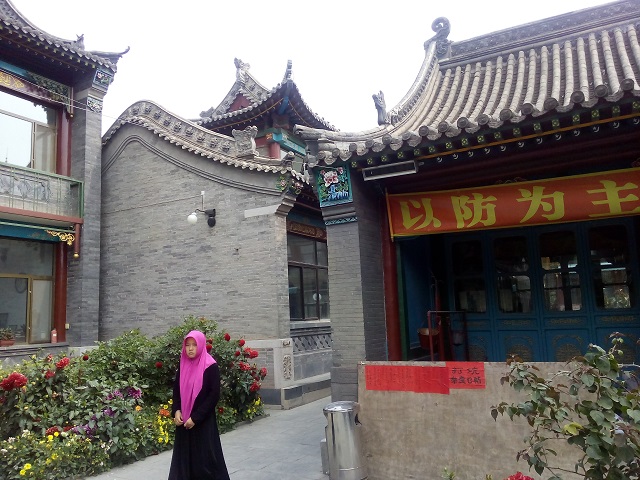 And of course the crescent moon on top of the tower: 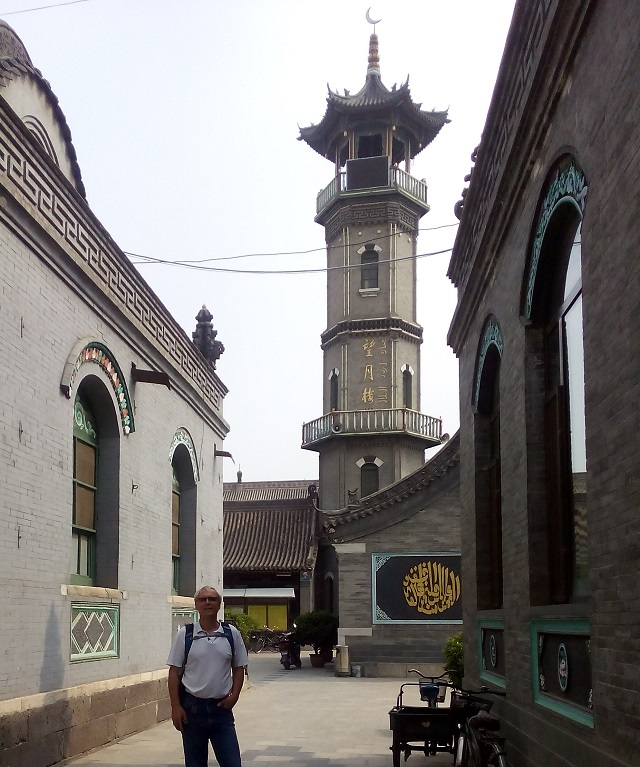 That took up most of the morning so we then headed in the other direction to look for the 500 year old Dazhao Temple. Heading in this direction we see some modern architecture that looks to be more Mongolian inspired: 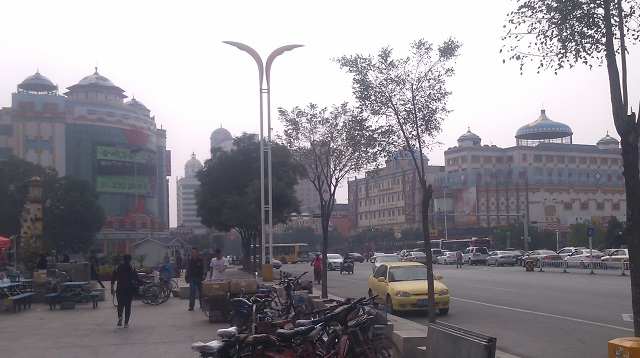 Still on the way we see some rather fancy looking chickens: 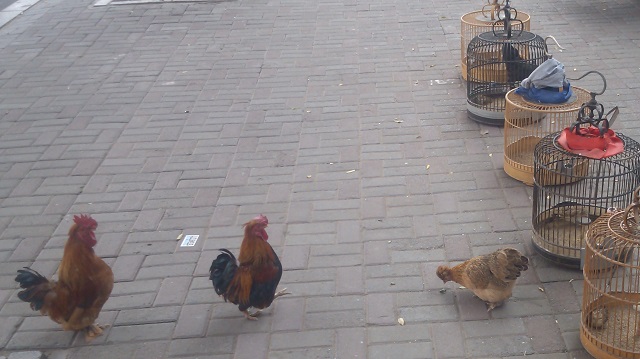 And not too to much later we arrive at the temple. It's big, this is just one small part of it: 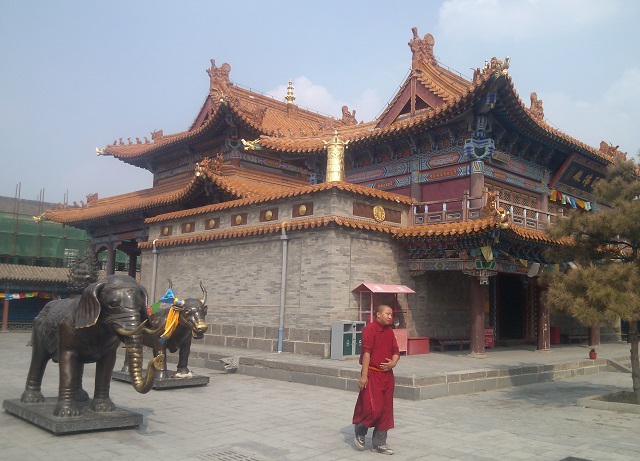 Altan Khan (a descendant of Kublai Khan) ruled Mongolia (and Tibet) in the 16th Century. He was the founder of the city of Hohhot and was also responsible for making Tibetan Buddhism the official state religion of all of Mongolia. Within 50 years virtually everyone in Mongolia was converted to Buddhism. Altan Khan also created the title of "Dalai Lama". A Spiritual leader of Tibet who was the founder of the monastery in Hohhot was named Sonam Gyatso and 'Dalai' is the Mongolian translation of 'Gyatso' meaning 'Ocean'. Sonam Gyatso became known as the Dalai Lama and this title has carried forward to the present day.

Out in the street again, we walked down the 400 year old street where they sell all sorts of Mongolian artifacts. Including statues of Mongolian warriors: 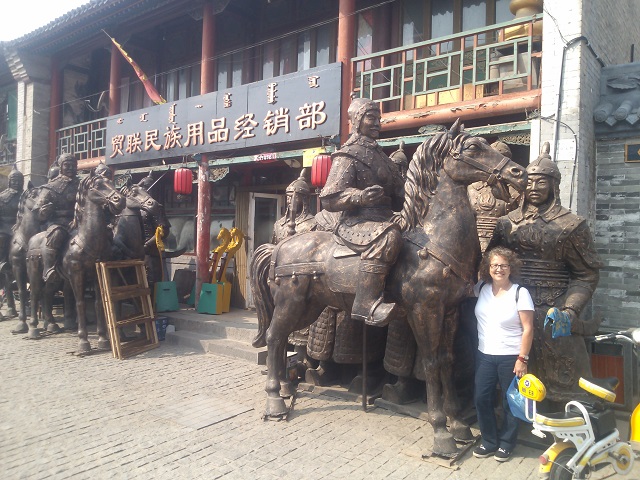 Next we looked for lunch on the way to the 5 pagodas temple. We didn't find lunch, but we found the temple: 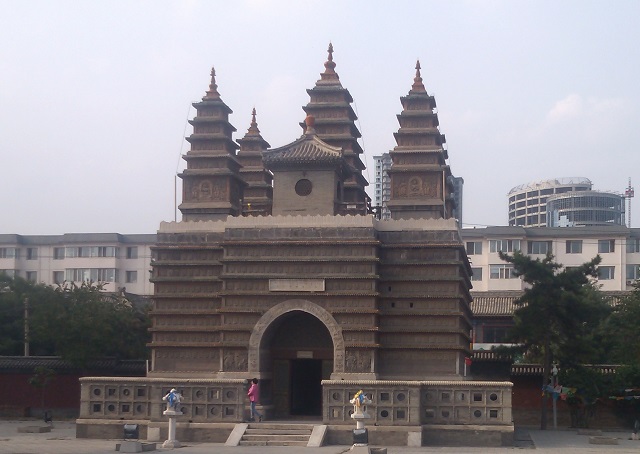 In one corner of the grounds was this passageway with a very interesting ceiling: 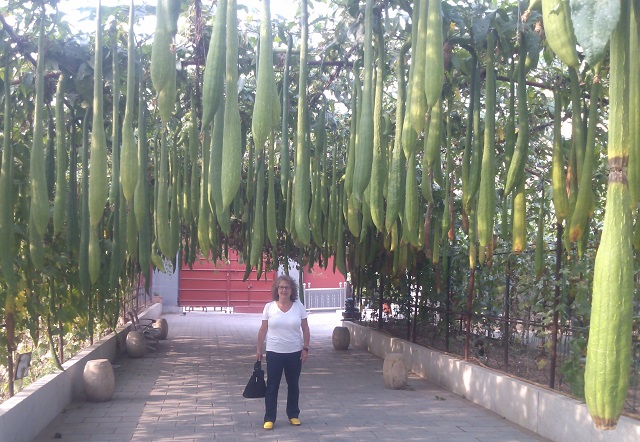 The following day we got the train back home. This time, we managed to get seats in the sleeper car. This was such a luxury compared to the coach ride we had coming. Of course we weren't sleeping but we did have a private cabin for just the 2 of us for 1/2 the trip and then shared it with a mother and her son for the rest of the way. So much more pleasant than being crammed in with the standing roomers. 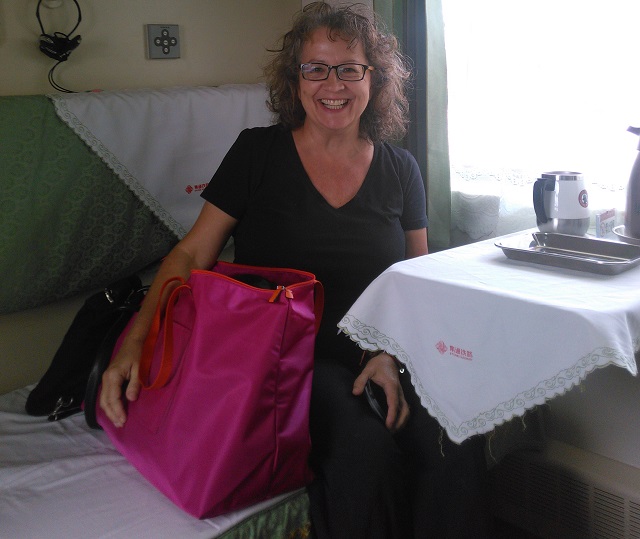 Some places along the tracks we would see little yurt shaped structures that we are fairly sure must be graves: 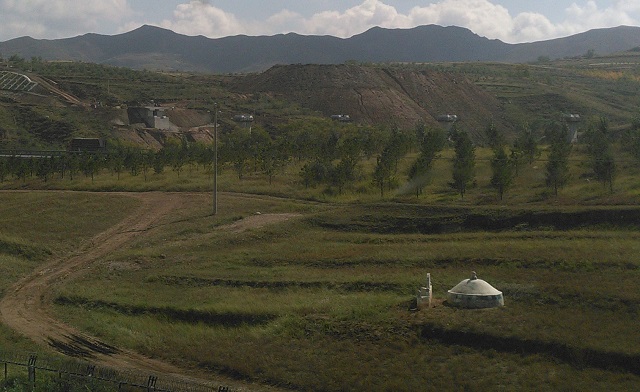 and sometimes they would be in clusters (little cemeteries): 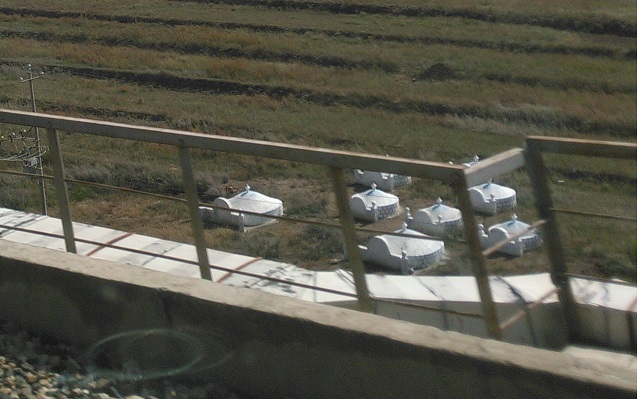 And sometimes we would see farms: 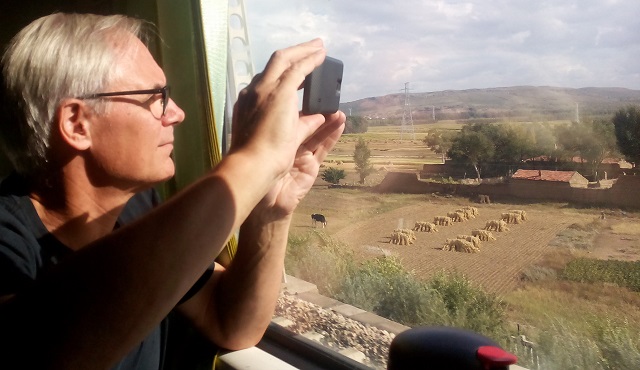 The trip back was only 4-1/2 hours as it was a slightly faster class of train. It was still less than 1/2 the speed of China's bullet trains, nice to be faster than the way there. Bullet trains don't run on this route - our next trip we'll try to go somewhere that is served by a bullet train - 350 km/hr wahoo!