We are leaving tomorrow for a short trip back to Canada. So trying to squeeze in this last post before leaving.

So, now for our trip to Beijing.

2 weeks ago, I took the train to Beijing to meet Carole at the airport. OK, lets look at the train: 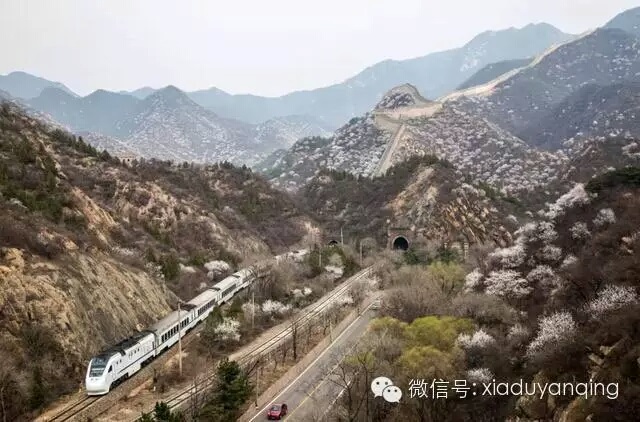 I didn't take this photo. I stole it from the Yanqing WeChat information page. We Chat is the Chinese substitute for Facebook which is blocked by the Chinese firewall. Yanqing is the closest town to where we live and although it is a good hour away from Beijing it is actually within the city limits (Beijing city limits extend out to become a province of its own). So, I can actually take this train and pay for it by swiping my Beijing city transit card. When I get off the train I just go down to the subway and can get anywhere in Beijing pretty quickly.

But well before we get to Beijing, we pass right through the Great Wall: 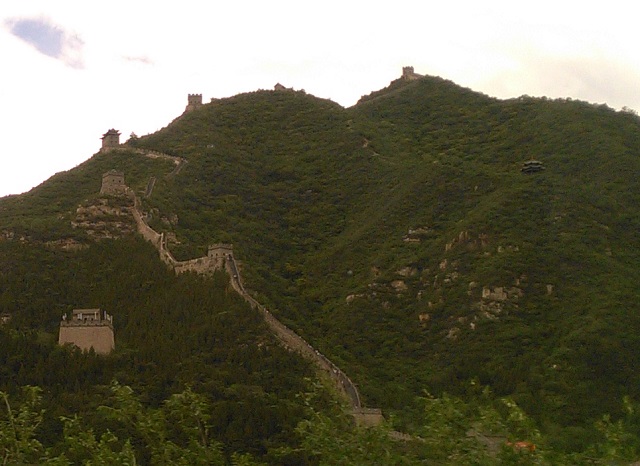 This picture I did take from the train. One of these days, we'll take the train and get off here to explore the Wall - not this day though.

And very close to where we pass the Great Wall, I saw this mobile phone antenna tower disguised as a tree. I've never seen such a thing before and I don't really know why they are trying to hide it: 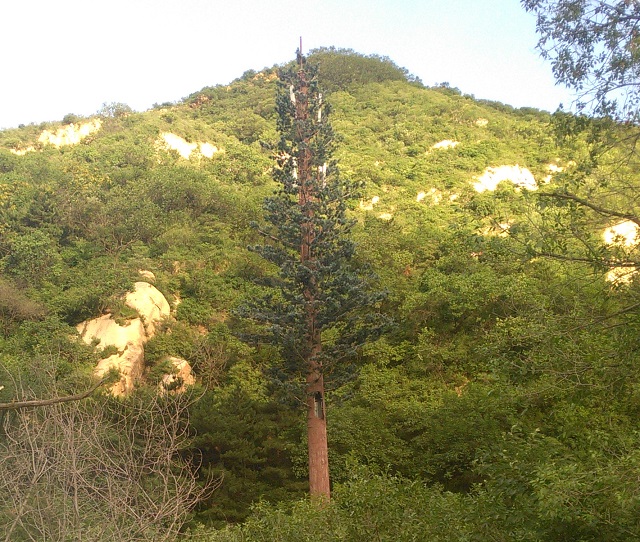 In the photo it is not so clear but you can still see the antennas up close to the top. And you can easily see someone left the access door open down closer to the bottom.

Here obviously, Ive already picked up Carole and here we are stopping for a cup of coffee near to the China government Visa office building. Carole is very happy because in China (the land of tea), it is generally not easy to get a good cup of coffee. But of course in Beijing, Shanghai, etc, one can easily find good coffee. 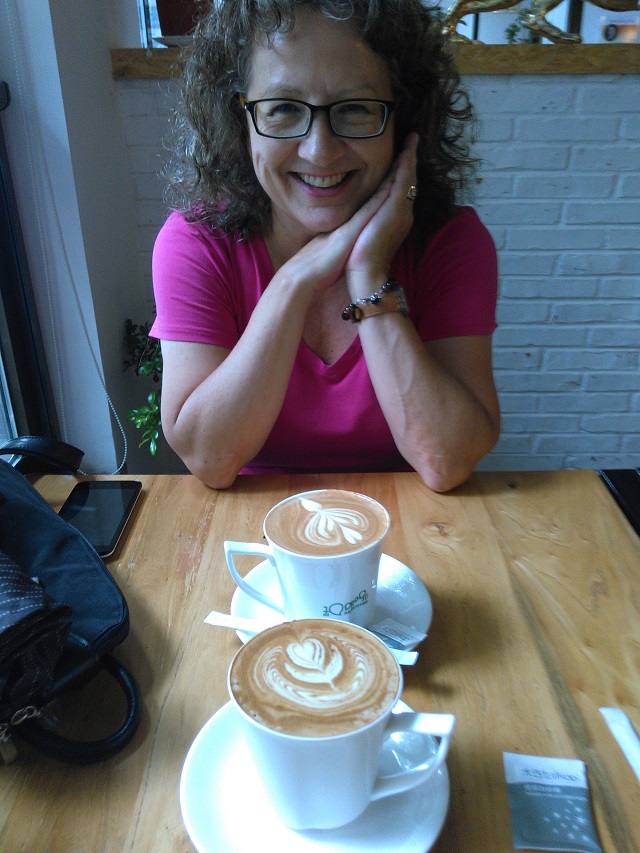 The coffee is taking our minds off of the visa issue. We were told we had to hand in the temporary travel visa by July 3 so we can get Carole's passport back. So we showed up June 30 only to find out we can't actually get the passport back until July 3rd. This has been a 5 month long adventure of maneuvering through Chinese customs, bureaucracy, doublespeak and corruption. On July 4 the process was actually complete and Carole now has a passport and a legal working and residency permit. I still have to get some paperwork from Canada when we are back and then I'll still have most of the same process to get through.

For this 2 day stay in Beijing we found a hotel close to the Visa office and a couple of sites we wanted to see. It turned out top be in quite an interesting neighborhood. Here's the street on the way to our Hotel: 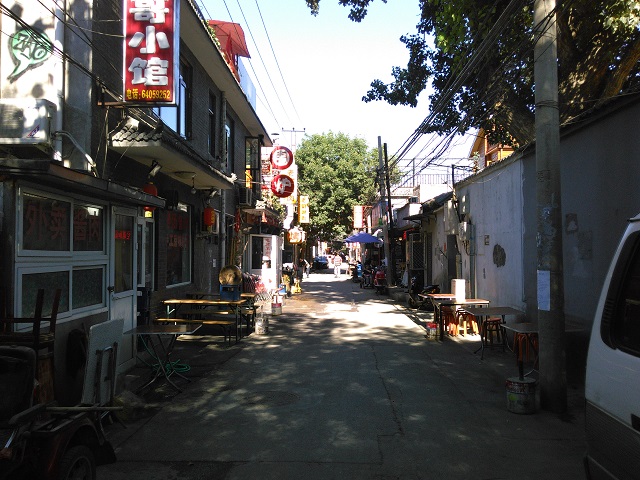 It is quite busy in the evening, The tables that you can see here at the small eateries are full of customers well into late night.

Here is the front door to our hotel: 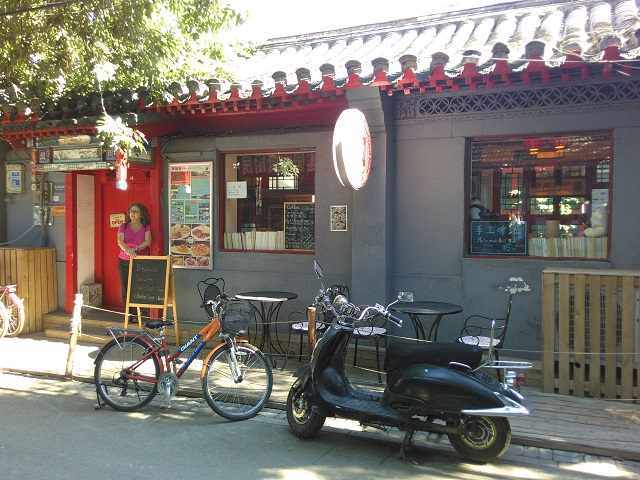 door to our room: 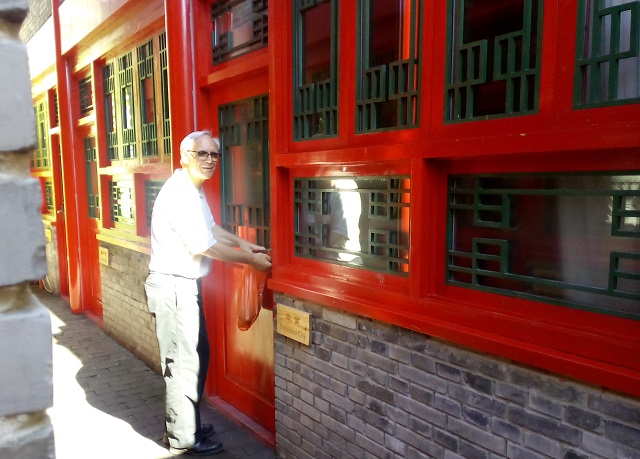 And this is what they call the "dining area" inside our room: 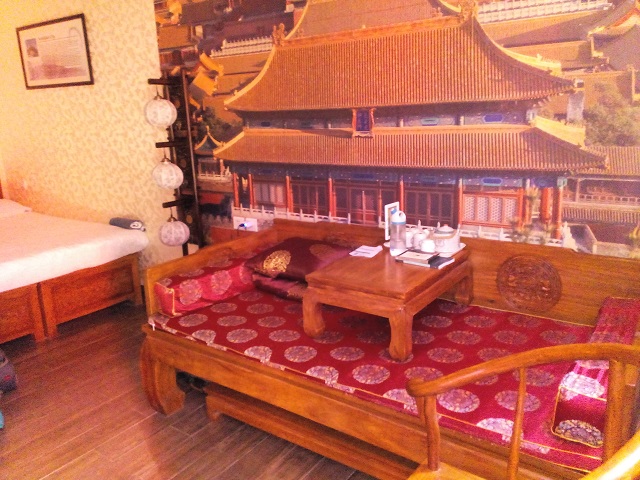 One of the sites we were within easy walking distance of is the Yonghe Lama Temple (a Tibetan Buddhist temple).

Here is one of the many incense burning areas of the temple - adding yet another bit of smoke to the hazy polluted skies. 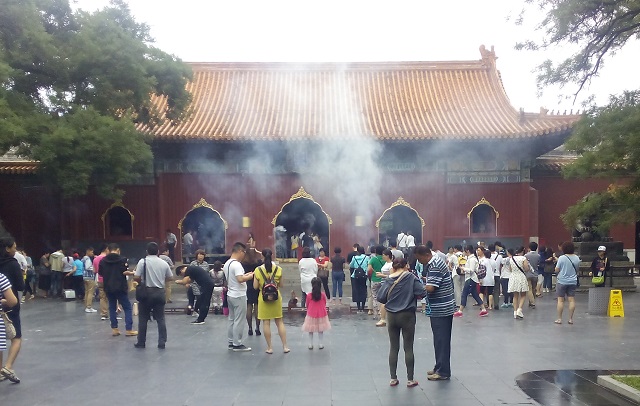 I must remark that people are most respectful here. As you can see it is mostly Chinese visitors, hardly any foreigners like us. So far it is the only place I've been in China where people leave the building to answer their mobile phones. Other than here, our experience is that people just pull them out and talk away anywhere and everywhere.

There are many many buildings within the temple walls. In this building lives the worlds biggest statue carved out a single sandalwood tree: 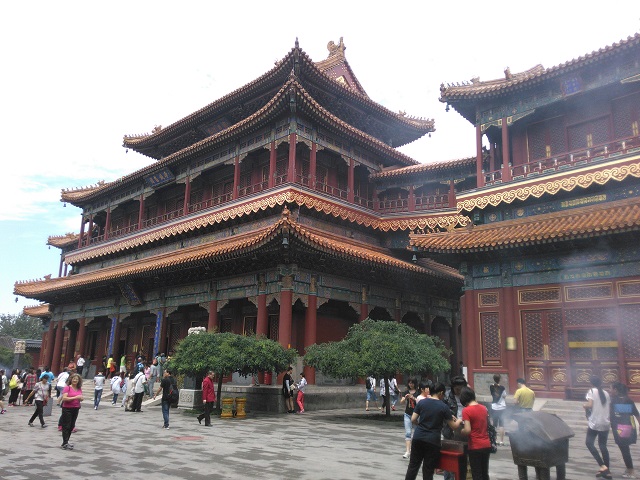 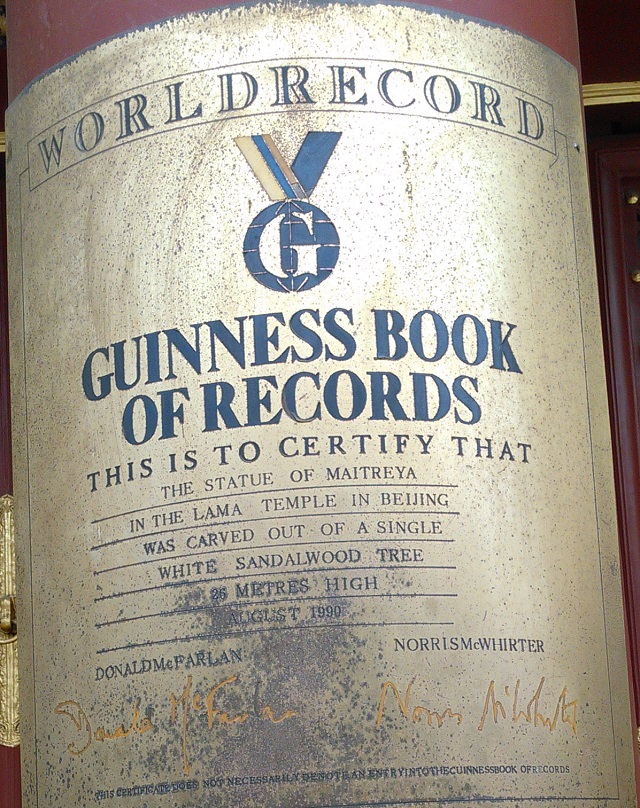 And here is the Statue. It is so tall  that from within the building I could not get one photo of the whole thing. So I glued 2 photos together - not at all a professional Photoshop job: 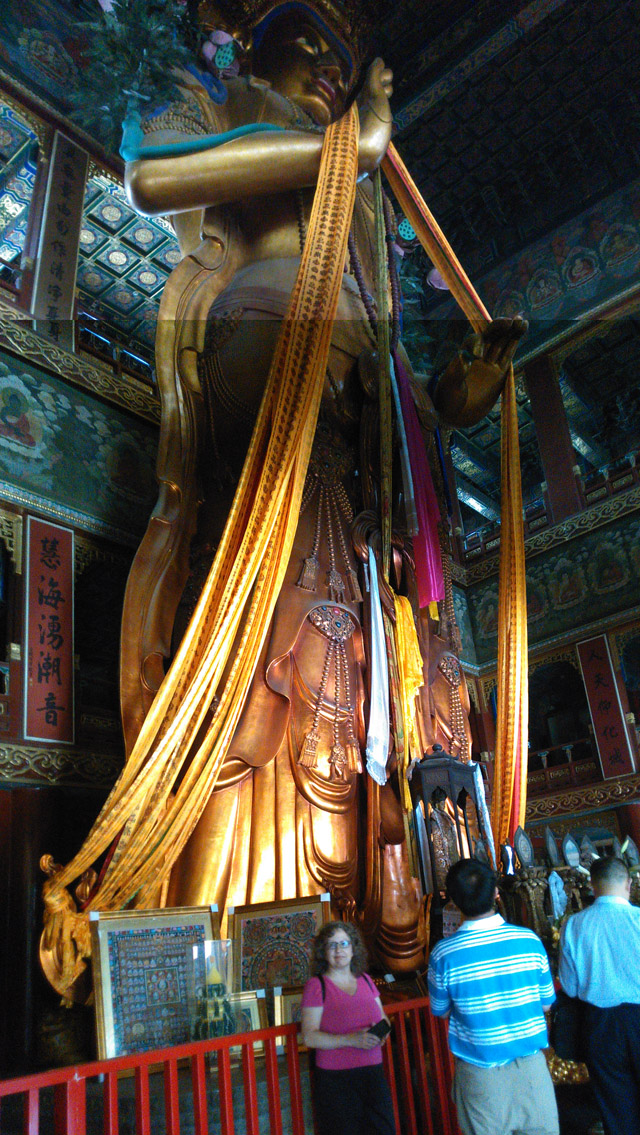 After visiting the Lama temple we wandered around looking for lunch. This is how many of the back alleys look. People just don't have much storage space in their houses so the alleys become overflow storage: 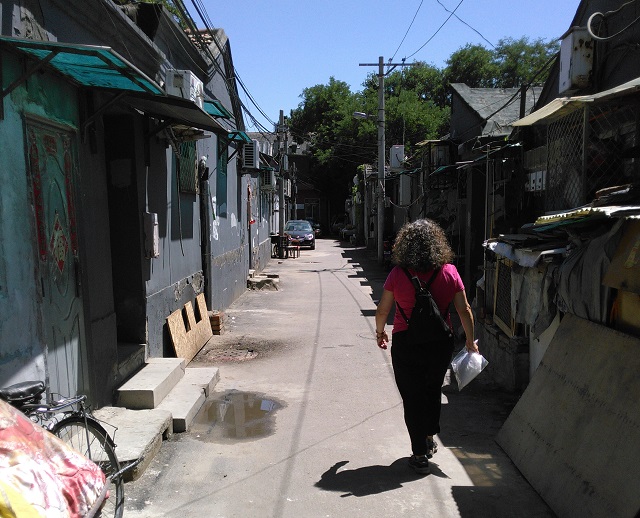 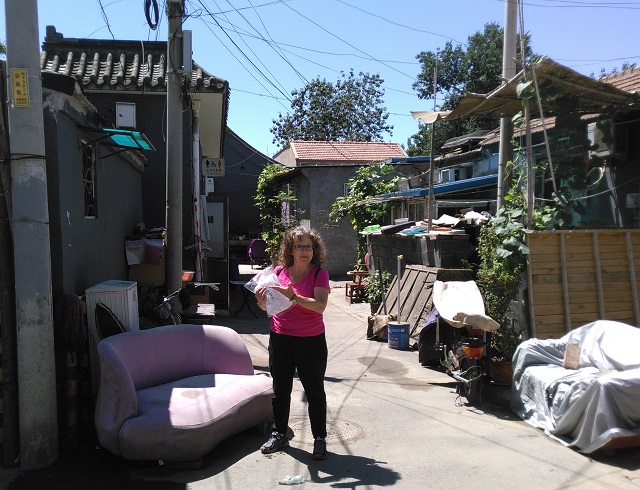 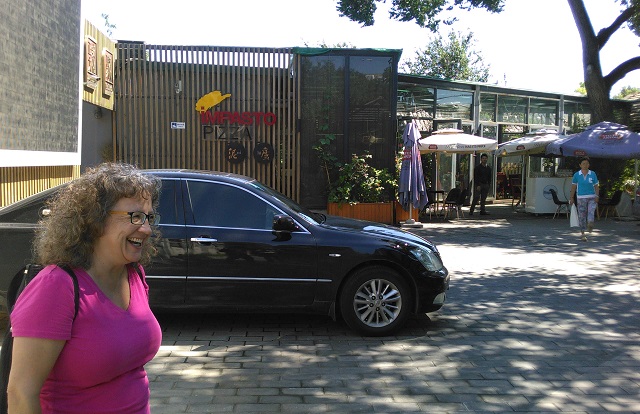 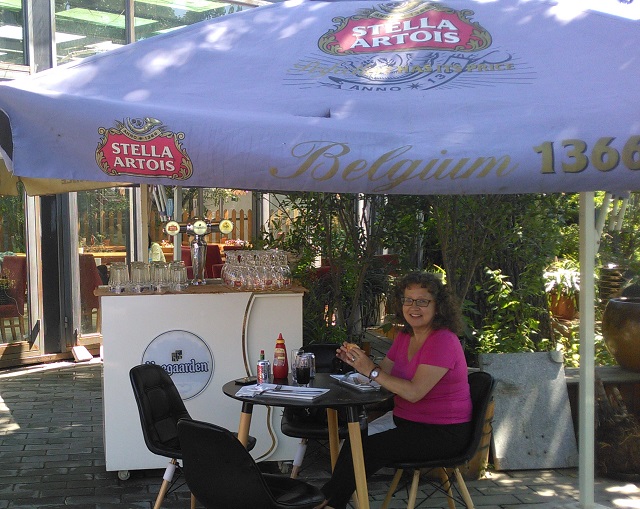 Next on the agenda was a visit to the Confucius temple, still a short distance form our house. Built in 1302 it's not considered ancient in China. Its just old: 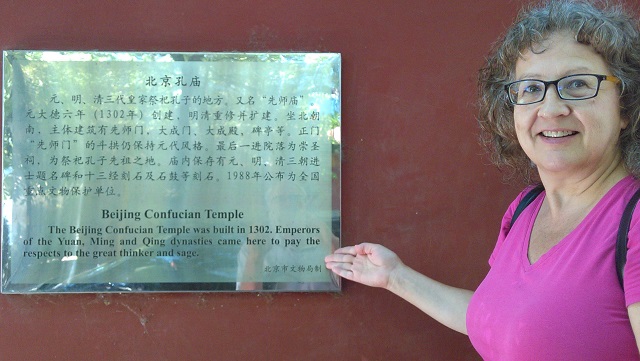 Some old trees here too: 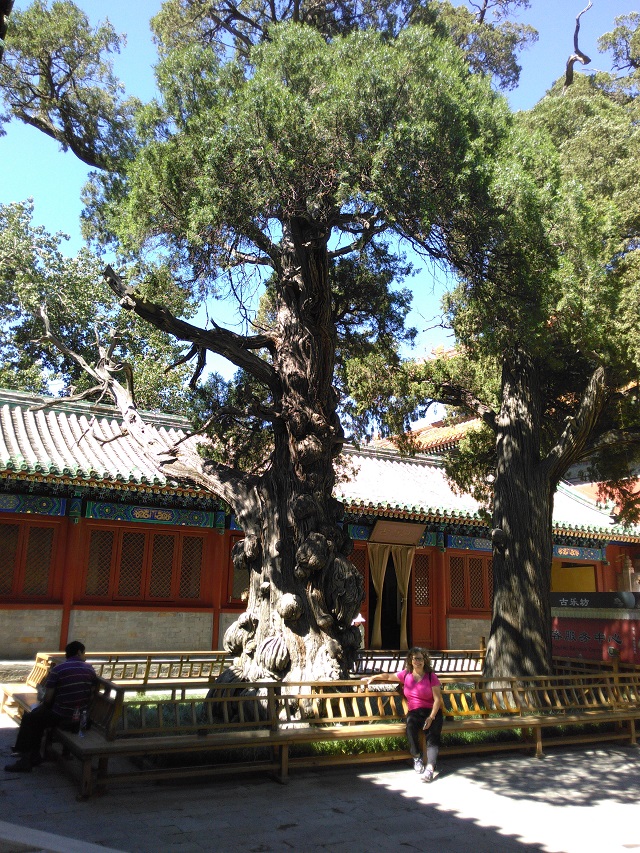 An interesting row of roofs: 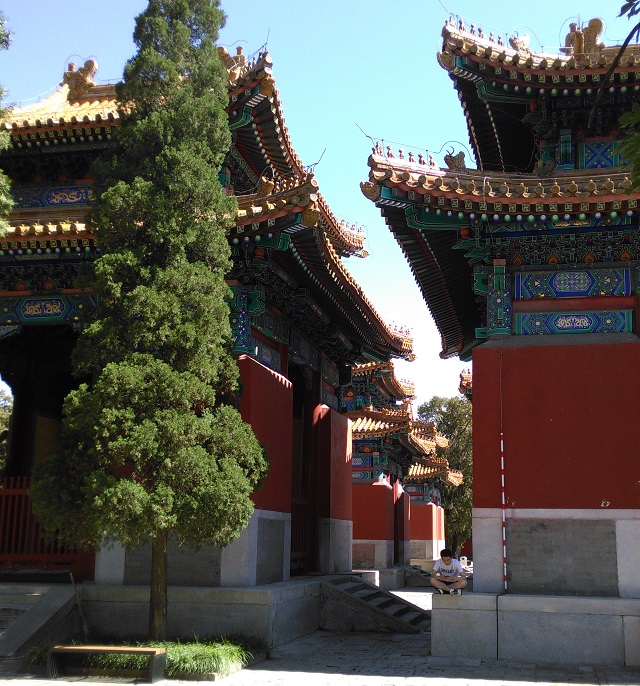 And here, after watching our feeble attempt at making a "selfie" photograph, a young woman offered to take our photo: 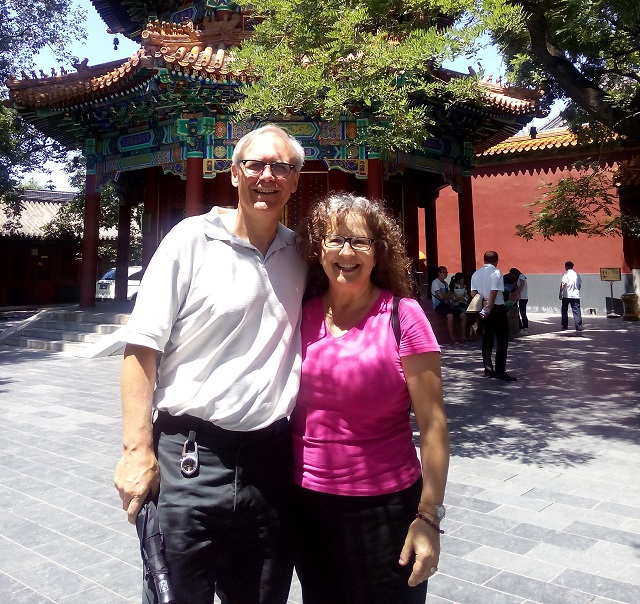 Here's me with the venerable Confucius: 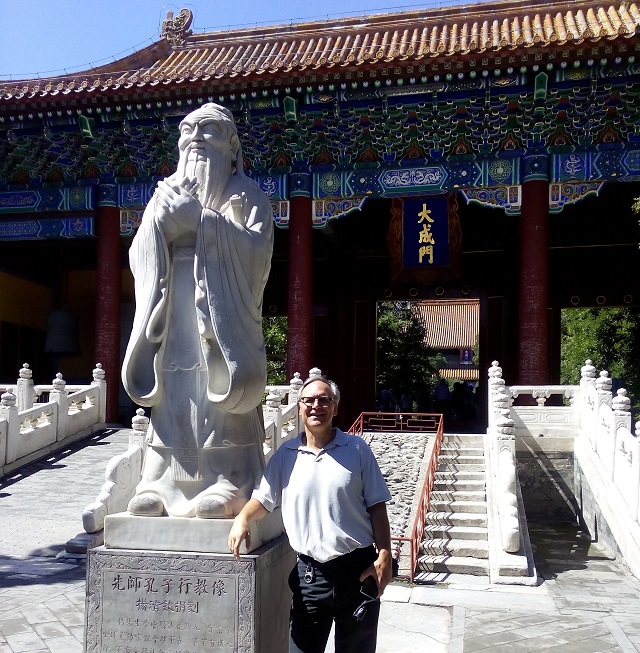 And Carole with yet another Confucius: 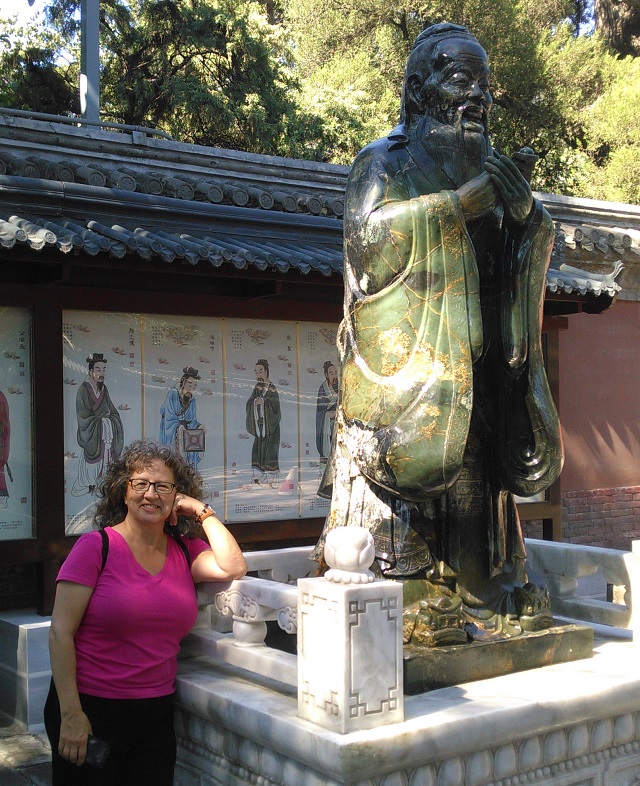 Here is a forest of 189 Stone Stelles that are engraved with 13 books of Classic Chinese Literature (most of it originally attributed to Confucius). 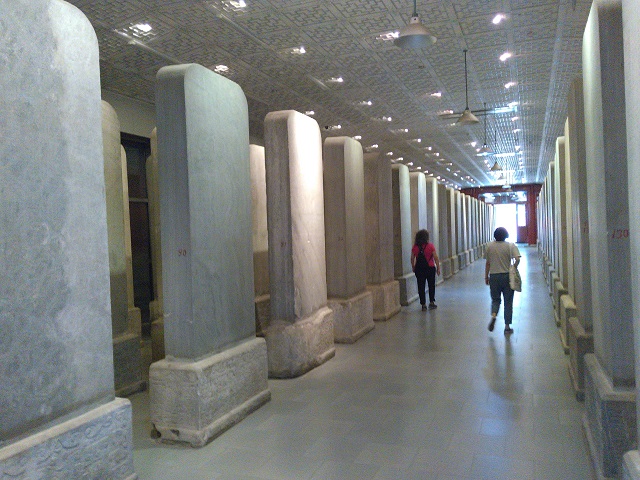 This engraving project was done in 1791 and took either 3 years or 12 to complete (depending which description is more accurate). A total of 628,000 characters all chiseled into the stone pillars: 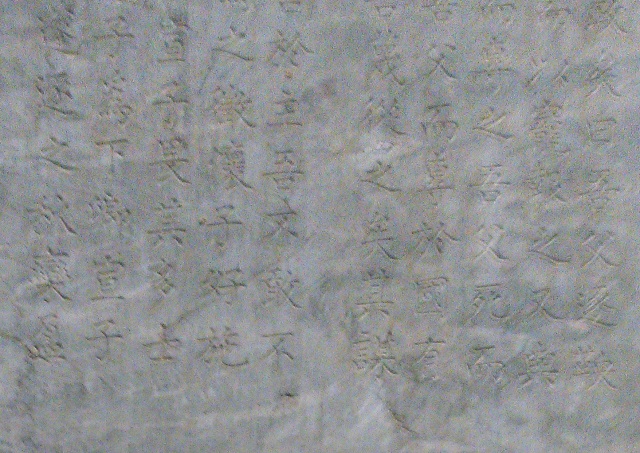 We since found out from reading the introduction to "The Analects of Confucius", that these stone stelles were a modern copy of the original stelles carved in 175 A.D. in the Imperial Academy.

And of course there are gates all over China so there must be at least one in the Confucius Temple: 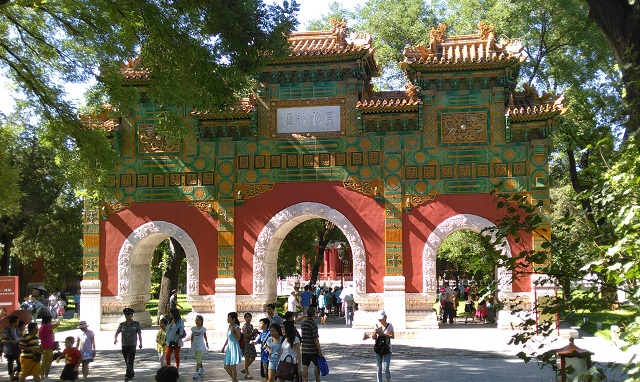 And some more on the street outside the temple: 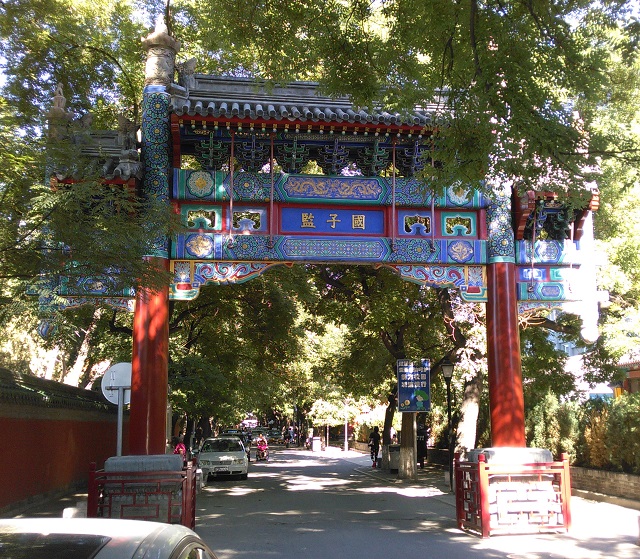 That was a wonderful day for us and was all within walking distance of our hotel. For the evening, we had a glowing recommendation to see "The Legend of KungFu" at the the Red Theatre. Now that was a 1/2 hour subway trip and a 20 minute walk: 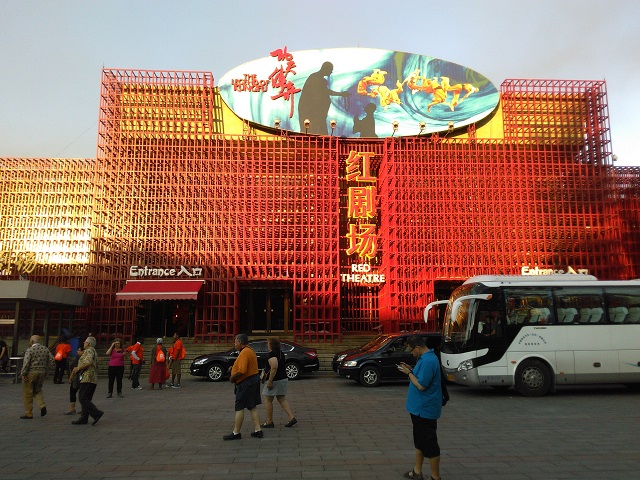 We didn't like it much. The first 10 or 15 minutes was fun but then it was just more and more of the same for 1-1/2 hours. Its a total tour bus destination.

The next day, before taking the train back to Yanqing and Jackson Hole, we went to Tiananmen Square. It took a while to get there because first we had wait in a long lineup to get through a security check:

There was something going on. We don't know what was happening. but all the streets where blocked off for blocks on all sides. Of course some of the main central government buildings are just accross the street from the square so there may have been an official event, or visiting dignitary, or ... Look at this major thoroughfare, 8 car lanes , 2 bicycle lanes and completely empty: 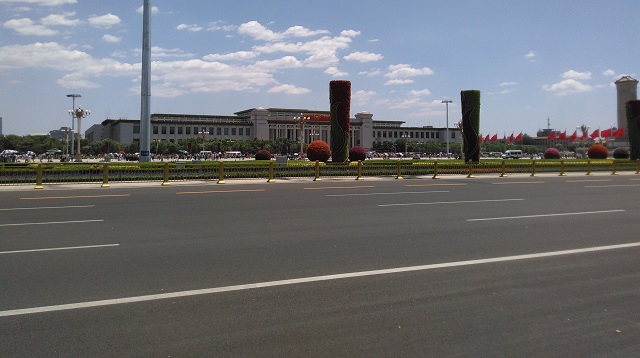 The square isn't empty. That's the gate to the Forbidden City at the far end of the square. 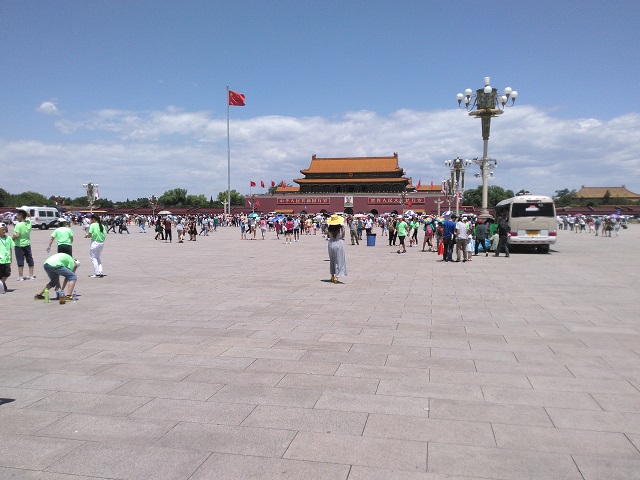 After Tiananmen Square we went to check out Sanlitun because we were also recommended that it is an interesting area but found that it is just a modern international shopping area, Like what we could find in Paris, London, New York or Dubai. No pictures. Then we took the train home and arrived just in time for dinner.
Posted by Unknown at 10:38 PM